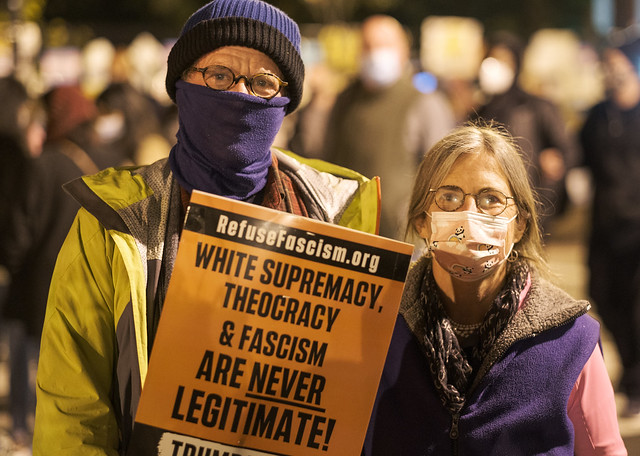 The latest attack did not occur in a vacuum. It was fueled by the far right which is becoming more unhinged by the day. Before Republican senator Marjorie Taylor Greene of Georgia took office, she embraced insane QAnon conspiracy theories and proclaimed that Pelosi was guilty of treason. She added: “it’s a crime punishable by death.”

During the coup attempt on January 6th, 2021, mobs broke into the Capitol and proceeded down hallways calling out her name. Some of them erected a makeshift gallows in front of the building. And since this incident there have been political ads depicting violence against the Speaker and other politicians in the Democratic Party.

Unsurprisingly, I’ve been a long time critic of Pelosi. I have been against her neoliberal, “we are capitalists” economic policies which have contributed to the abysmal condition of labour, while consistently voting to increase the budget of a bloated and belligerent military sector. I have opposed her reckless foreign policy blunders, like recent trips to Armenia and Taiwan, which have only exacerbated global tensions at a time when de-escalation of conflict should be a priority. And I have vocally decried her continued support for the apartheid regime in Tel Aviv and the despotic theocracy in Riyadh.

But she is not being attacked for these positions. The animus toward Pelosi stems from a noxious, far-right ecosystem where political and social paranoia are the lay of the land. It is a place where complex social, economic and cultural issues are reduced to two dimensional, black and white shadow plays.

This strange world, which largely exists online, is where troubled souls perseverate on supposed secret cabals who meet in shadowy caves in Washington, DC or New York to plan out their diabolical crimes of world domination. It is a place where logic and reason have been abandoned for magical thinking and cult-like obeisance to charismatic authoritarian figures. A place where social hatred, racism and prejudice have become acceptable opinions and mental illness is ruthlessly exploited. Where fascism is nourished and encouraged to fester in minds that have been alienated from civil society, cut off from a future of promise, addled by drugs or online hate, and denuded of nuance and critical thinking skills. And it is where violence is seen as the only vehicle for agency in our society.

Violence is the currency of fascism, and in the US it is endemic. It has been woven into the very fabric of the culture since its colonial settler roots in Native American genocide and ethnic cleansing and the African slave trade. It is a common thread through its bloody crushing of labour movements, Jim Crow segregation and lynching, internment of Japanese citizens, suppression of women’s suffrage, reproductive freedom and LGBTQ+ rights, wars of domination against Vietnam, Iraq, Afghanistan, Libya and beyond, to the mass shootings and police and prison brutality of today. And that violent tradition informs the miasma of lies and lunacy we see online.

Attacks against political leaders like Pelosi, or the normalization of them, are canaries in the coal mine. They warn us of something potentially catastrophic looming ahead. But there are no signs that those who need to hear them are listening. Only days after the attack on Paul Pelosi, who is still in hospital, Donald Trump, Jr. tweeted a photo mocking him and peddling a discredited conspiracy theory. He has not deleted it. As of this writing it has gained over 20,000 likes and was retweeted over 3000 times. He understands his father’s political base. The question is, do we?

Kenn Orphan is a writer, artist, antiwar and anti-capitalist activist, hospice social worker and radical nature lover living in Halifax, Nova Scotia. As an independent writer and artist Kenn Orphan depends on donations and commissions. If you would like to support his work and his blog you can do so via PayPal. He may be contacted at KennOrphan.com. Previously published on Kenn Orphan, Oct. 31, 2022

3 thoughts on “Political Violence is the Currency of Fascism, by Kenn Orphan”