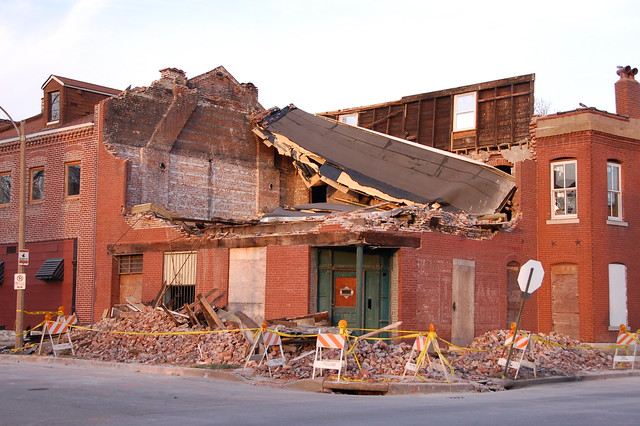 When we analyze the collapse that our civilization is undergoing, we need to factor in the reality about collapse that our ruling class doesn’t want us to consider: collapse isn’t a politically neutral thing. It’s something that exists because capitalism has made the conditions for it possible.

The pandemic wouldn’t have led to millions of workers getting disabled from long Covid if our socioeconomic system didn’t prioritize profits over the population’s safety. The climate crisis wouldn’t be on the verge of setting off several tipping points if 100 companies weren’t here to create two-thirds of carbon emissions, or if the U.S. military weren’t here to serve as the largest institutional polluter. This economic crisis, and the destructive measures the Fed is resorting to in order to delay it, wouldn’t have come if capitalism didn’t unavoidably produce crises on a periodic basis.

If collapse is the built-in outcome of our social order, if it was inevitable since this order first came into being, then the decline of our conditions is not merely something that’s happening. It’s a manufactured crisis, engineered for the purpose of keeping up profits amid capital’s contraction. Every facet of the chaos that we’re experiencing in our daily lives—the exploding prices, the ongoing reality of a pandemic that our government pretends is gone, the climatic disasters impacting growing amounts of society—is at its core about a power struggle. A power struggle between the people, who are being hit ever harder by our crises, and the ruling class, which is deliberately letting these crises worsen so that the machine of capital can keep running. This model for maintaining the system is obviously unsustainable, making the economy more and more top heavy. But it’s the only way the system can be maintained at this stage, when capitalism has consumed far too much and must now eat itself at an accelerating rate.

Such is the context that’s crucial to understand when observing the implications of this latest economic crisis. These implications are that the crisis has come at the perfect time to maximize the destabilizing impacts which economic downturns have. It’s appearing at the same moment that a new pandemic has come to upturn civilization in the way the Black Death did; that U.S. hegemony has been steadily unraveling for two decades, to the effect that Washington’s power is close to being spent; and that a climatic and ecological crisis has come to disrupt humanity on a more widespread and permanent level than any previous crisis has.

All four of these crises—crash, plague, falling empire, environmental ruin—serve to compound each other, and therefore can be considered to make up the same crisis. The capitalist crisis, in which growing numbers of people see their conditions deteriorate, become more vulnerable to the virus and to the growing natural disasters, and all the while are viewed as expendable by a ruling class that’s only concerned about maintaining an ailing system. This is a process that can’t be reversed, not for as long as the current social order remains in place. Until revolution comes, the situation’s deterioration can only get faster. In the last three years alone, the amount of Americans living paycheck to paycheck has gone up by 5% from 59 to 64 percent, and millions of Americans in addition to the newly unemployed long Covid victims have come to no longer have paychecks. As the crash unfolds, this transition into an impoverished country will no doubt speed up even further. All the while, our government will respond by intensifying its policies to weaken the working class, and to enable the disaster capitalists who exploit our societal traumas.

Collapse isn’t a tragedy, it’s a crime. A crime being perpetrated against us for the benefit of a tiny minority. Recognizing this nefarious motive at the root of our situation is the first step in working to correct it. Support for revolutionary change doesn’t come from poor conditions alone, but from the people’s realization that their conditions could be better if not for the way society is set up. We could be living under a social order like the one in China, where the government has stepped in to save millions from the virus, where poverty has been steadily decreasing over the last half century rather than going up, and where a green new deal has been implemented to the effect that the country’s pollution has vastly cleared up during the last ten years.

Under a dictatorship of the proletariat, instead of a dictatorship of the bourgeoisie, even severe contradictions like the past smog levels within Chinese cities can’t be expected to simply keep getting worse. The productivist errors the Communist Party of China made during its market reforms have since been corrected, and the country’s liberalizations have been getting reversed under Xi Jinping. The opposite is the case under the capitalist states. Our ruling class will never be willing to undo the damages its policies have wrought upon humanity and the environment, because these damages are the thing keeping its system in place. The policies that led to China’s era of extreme pollution were a bug in the system, not a feature; they stemmed from Deng’s having given too much authority over production to the local authorities, making environmental impacts difficult to regulate. That flaw has been fixed. No such improvement has come within the United States, or practically any other bourgeois-controlled country.

To justify this vicious cycle’s perpetuation, the partisans of our social order claim there’s no alternative to dictatorship by the rich. Because the system can only keep contracting, and there’s no way imperialism’s benefits can again be used to buy the population’s docility, capitalism’s defenders can only justify their position by saying the systems besides ours are invariably even worse. They spin narratives about China’s pandemic successes having come at some grievous cost, like any cost could be worse than several million deaths and rapid mass disability. They prop up celebrity north Korean defectors who fabricate over the top horror stories about existing socialism. They describe the pro-Ukraine side in the present conflict as the “free world,” when the U.S. is the country with the largest number of prisoners. These ridiculous pieces of propaganda are how they can continue to make the argument Mark Fisher described:

“If capitalist realism is so seamless, and if current forms of resistance are so hopeless and impotent, where can an effective challenge come from? A moral critique of capitalism, emphasizing the ways in which it leads to suffering, only reinforces capitalist realism. Poverty, famine, and war can be presented as an inevitable part of reality, while the hope that these forms of suffering could be eliminated easily painted as naive utopianism. Capitalist realism can only be threatened if it is shown to be in some way inconsistent or untenable; if, that it is to say, capitalism’s ostensible “realism” turns out to be nothing of the sort…Lowering our expectations, we are told, is a small price to pay for being protected from terror and totalitarianism.”

Even from that perspective, where the nebulous concept of “terror and totalitarianism” is more scary than the benign evils of capitalism, capitalism still needs to be scrapped. Our own social order has produced terror in the form of militarized police, the terrifying prospect of homelessness, the dangers from Covid-19, climate destruction, and the other threats capitalism subjects us to. And as far as “totalitarianism” can be considered a substantive term, our system has been drifting towards it with the mass surveillance and censorship of the War on Terror era. There’s no honest argument for perpetuating the existing social order. Replacing it is the only rational option.

Loving Nature Or Profiting From It: Take Your Pick, by Robert C. Koehler

The End of Western Civilization, by Michael Hudson