Negotiating with the US over nuclear issues, sovereignty, peace and much else, is like playing card poker with a punk in a Wild West saloon. You’re never going to win because the punk makes up all the rules of the game. In fact, he can change the rules of the game as he goes along to make sure he always wins.

END_OF_DOCUMENT_TOKEN_TO_BE_REPLACED

As part of Obama’s recent announcement about expanding “missile defense” (MD) systems in Alaska, along with studies to determine a possible site for an East Coast base in the US, the Pentagon also announced a second MD X-band radar would go into Japan.

The US military uses X-band radars to precisely track the trajectory of an “enemy” ballistic missile, allowing its forces to launch Army ground-based (PAC-3) and Navy sea-based (SM-3) interceptors as soon as a missile is detected.

END_OF_DOCUMENT_TOKEN_TO_BE_REPLACED

No other state on earth has endured a trade embargo or a gamut of diplomatic, financial and economic sanctions more than North Korea. END_OF_DOCUMENT_TOKEN_TO_BE_REPLACED

The members of UN Security Council have unanimously agreed to step up sanctions against North Korea, a month after the Communist state carried out a third nuclear test. Just hours ahead of vote, Pyongyang threatened what it called ‘aggressors’ with a pre-emtive nuclear strike in response to the ongoing U.S. joint military drills with South Korea.

END_OF_DOCUMENT_TOKEN_TO_BE_REPLACED 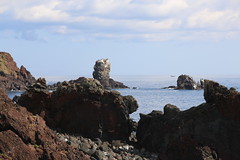 This a brief overview of the struggle to prevent the construction of a massive naval base in the tiny village of Gangjeong, on Jeju Island, S. Korea. In order to understand why the villagers have been opposing the construction 24 hours a day, 7 days a week for five years and risking bodily harm and imprisonment, one must understand the broader context.

END_OF_DOCUMENT_TOKEN_TO_BE_REPLACED

If you want to know more about what is happening in Jeju island, please visit savejejuisland.org.

END_OF_DOCUMENT_TOKEN_TO_BE_REPLACED

I mean the United States, not North Korea, of course. The Koreans will get along if not fine, at least no worse than before Kim Jong Il’s recent departure from the scene. No, the United States faces a crisis it is completely unprepared for. We have had entirely too much invested in demonizing Kim and his nation and what with the recent exit of Gadaffi from the scene, and Saddam’s and Osama’s too, all the leading bugbears of the US’ national security (read: permanent war fear and of late permanent war) state are gone, and we must ask ourselves what are we to do now, with them all gone? Who can replace them? How can we replace them in time to keep people from asking embarrassing questions about our gross overexpenditures on our transparently incompetent and incapable military? END_OF_DOCUMENT_TOKEN_TO_BE_REPLACED

END_OF_DOCUMENT_TOKEN_TO_BE_REPLACED

This Sunday (September 4), Cindy welcomes good friend of peace and of Cindy Sheehan’s Soapbox, the notable woman of conscience, Ann Wright. Ms. Wright won’t steer you wrong! On this show she will talk about the recent Gaza Freedom Flotilla which she was a leader on the American boat and her recent trip to Jeju Island in South Korea where the Korean occupants are making a courageous stand against a US Naval base being built there. END_OF_DOCUMENT_TOKEN_TO_BE_REPLACED END_OF_DOCUMENT_TOKEN_TO_BE_REPLACED

Six seems to be my lucky number. I was able to hand out six leaflets at Bath Iron Works (BIW) yesterday. But I found a way around the road block though. I sent the leaflet language to the local newspaper as a Letter to the Editor and it was printed yesterday. END_OF_DOCUMENT_TOKEN_TO_BE_REPLACED END_OF_DOCUMENT_TOKEN_TO_BE_REPLACED

The United States is engaged in the longest war in its 234-year history in Afghanistan, one that will begin its eleventh calendar year in two weeks. Like the war that had been America’s longest before now, that in Indochina, the current one is in the Asian continent.

With repeatedly extended projected withdrawal dates, the latest is 2014, although even that has been characterized by Pentagon spokesman Geoff Morrell as merely “aspirational,” the campaign in Afghanistan and over the past two years in neighboring Pakistan has marked Asia as the center of U.S. global military strategy and operations.