Two years ago, I underestimated the power of U.S. imperialism, to the consequence of having a nasty shock when I found out that Bolivia’s president had been forced to resign in a U.S.-orchestrated military coup. I had anticipated that Washington would carry out a regime change attempt in Bolivia for months prior to that day, but up until the coup actually happened, I remained under the illusion that Bolivia’s democracy would withstand the onslaught of white supremacist terrorism that Washington’s running dogs were unleashing upon the country after the 2019 election. U.S. hegemony was in decline; even the Pentagon had admitted this two years prior. For the imperialists to have victory at that moment felt counterintuitive, especially to my younger and more naive mind.

END_OF_DOCUMENT_TOKEN_TO_BE_REPLACED 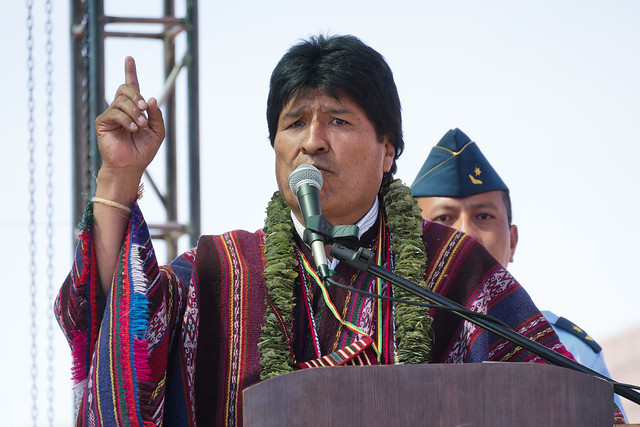 Only days before Evo Morales stepped down as Bolivia’s president audio tapes were published implicating opposition politicians, the US embassy and American senators in a coup plot.

END_OF_DOCUMENT_TOKEN_TO_BE_REPLACED

A close look at the history of the CIA from its initial mission of intelligence gathering during World War II to covert subversive, counterrevolutionary, assassination operations around the world to CIA-led coups and regime changes from its backyard of Latin America to Africa, Europe, Middle East/Near East, Far East, Central Asia, … to its present day War on Terror.

END_OF_DOCUMENT_TOKEN_TO_BE_REPLACED

“We are your people. The peasants you kill are your own brothers and sisters. When you hear the voice of the man commanding you to kill, remember instead the voice of God. Thou Shall Not Kill…. In the name of God, in the name of our tormented people whose cries rise up to heaven, I beseech you, I beg you, I command you, stop the repression.”– Oscar Romero, March 23, 1980

END_OF_DOCUMENT_TOKEN_TO_BE_REPLACED

A close look at the history of the CIA from its initial mission of intelligence gathering during World War II to covert subversive, counterrevolutionary, assassination operations around the world to CIA-led coups and regime changes from its backyard of Latin America to Africa, Europe, Middle East/Near East, Far East, Central Asia, … to its present day War on Terror.

END_OF_DOCUMENT_TOKEN_TO_BE_REPLACED

DemocracyNow.org – Journalist Seymour Hersh has revealed that the Bush administration secretly trained an Iranian opposition group on the State Department’s list of foreign terrorists. Hersh reports the U.S. Joint Special Operations Command trained operatives from Mujahideen-e-Khalq, or MEK, at a secret site in Nevada beginning in 2005. According to Hersh, MEK members were trained in intercepting communications, cryptography, weaponry and small unit tactics at the Nevada site up until President Obama took office. The MEK has been listed as a foreign terrorist groups since 1997 and is linked to a number of attacks, spanning from the murders of six U.S. citizens in the 1970s to the recent wave of assassinations targeting Iranian nuclear scientists. Hersh also discusses the role of Israeli intelligence and notes the Obama administration knew about the training, “because they have access to what was going on in the previous administration in this area, in terms of the MEK, in terms of operations inside Iran.” His new report for The New Yorker blog, “Our Men in Iran?,” comes as nuclear talks are set to resume this week between Iran and the International Atomic Energy Agency.

END_OF_DOCUMENT_TOKEN_TO_BE_REPLACED

The United States has been known as a beacon for civil liberties, except these days it seems those rights are being stripped away more and more. Police in Fort Benning, GA arrested RT correspondent Kaelyn Forde and cameraman Jon Conway at a rally that was protesting the SOA, however the two were doing their jobs as part of the press. Author and blogger David Lindorff says US police are a part of a joint strike force with Homeland Security to collect information on Americans in order to create a police state.