This is the 1-hour version of our 1 ½ hour groundbreaking documentary 9/11: Explosive Evidence — Experts Speak Out which is available for purchase as a DVD in our online store at http://www.AE911Truth.org or as a download or video-on-demand at http://www.911ExpertsSpeak.org.

END_OF_DOCUMENT_TOKEN_TO_BE_REPLACED 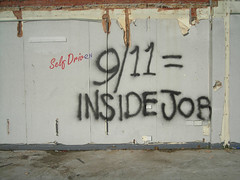 END_OF_DOCUMENT_TOKEN_TO_BE_REPLACED

On the 8th of March 2010 Cynthia Mckinney (a former US Congresswoman and 2008 Green Party Presidential nominee) and Dr Nafeez Ahmed (best selling author and political scientist) address a meeting of Members of Parliament on the subject of the need for an independent investigation into the events of September 11th 2001.

END_OF_DOCUMENT_TOKEN_TO_BE_REPLACED

I think this is important for people in the 9/11 Truth Movement to hear.

END_OF_DOCUMENT_TOKEN_TO_BE_REPLACED

Please view the following video message and read the special speeches that Congressman Kucinich gave immediately after the September 11, 2001 attack on the United States and the subsequent analysis he presented just before the vote on the Iraq War.

END_OF_DOCUMENT_TOKEN_TO_BE_REPLACED

Repost of a music video.

Chip Berlet’s 57-page paper, “Toxic To Democracy: Conspiracy Theories, Demonization, & Scapegoating,” provides a useful warning to progressives that the “conspiracism” mindset can lead to demonizing as well as scapegoating groups such as Jews, and become a “tool of fear” which would easily be “used by cynical demagogic leaders to mobilize a bigoted mass base”, as he says.

But, in lumping together all those such as Prof. David Ray Griffin, many family members of 9/11 victims, many scientists, engineers, architects and firefighters, and credible progressives  who all call for a true, independent, objective, thorough investigation of the events of the 9/11/01 terrorism as “conspiracy theorists” who blame Jews and imagine fantastic scenarios on that day, he not only does a disservice to those of us who are NOT given to such ludicrous fantasies, but also neglects the most important factor in a democracy: truth based on facts.

END_OF_DOCUMENT_TOKEN_TO_BE_REPLACED

Months, years and then decades slip by.  Despite an avalanche of information burying me everyday I had not read or heard anything about 9/11 truth for many, many months.  Sometimes movements become so marginalized that they no longer have enough vitality to stay within the consciousness of very many people.

I am sure, of course, that there are 9/11 truthers out there that still give and attend talks, write and receive emails and have lively conversations about the insanity of the official government story about 9/11 surviving and various alternative explanations of what really happened.  Yet, in not too many weeks, another 9/11 anniversary will be here.  And maybe then I will be hit again with chatter about what really happened on that past fateful and awful day.  But today it is this writing by me that is my 9/11 truth: Hardly any Americans are concerned about 9/11 truth and there is no real interest in Congress in launching a new investigation.

END_OF_DOCUMENT_TOKEN_TO_BE_REPLACED

According to several left-leaning critics of the 9/11 Truth Movement, some of its central claims, especially about the destruction of the World Trade Center, show its members to be scientifically challenged. In the opinion of some of these critics, moreover, claims made by members of this movement are sometimes unscientific in the strongest possible sense, implying an acceptance of magic and miracles. END_OF_DOCUMENT_TOKEN_TO_BE_REPLACED