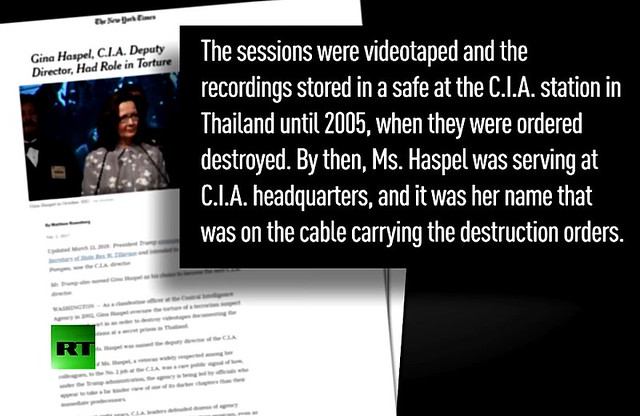 John Kiriakou, CIA Whistleblower, discusses the atrocities of the CIA and its torture program.

END_OF_DOCUMENT_TOKEN_TO_BE_REPLACED

Well, the cat is now out of the bag, and Guantánamo will, hopefully, be closer to closure — and the lies that powerful Americans tell about it will, hopefully, be closer to silence — as a result. For the last few weeks, I’ve been working as a media partner with WikiLeaks, along with the Washington Post, McClatchy Newspapers, El Pais, the Daily Telegraph, Der Spiegel, Le Monde, Aftonbladet, La Repubblica and L’Espresso, navigating thousands of previously unseen documents about Guantánamo that were made available to the whistleblowing website last year, allegedly by Pfc Bradley Manning, who has been imprisoned for nearly a year by the US government, awaiting a trial.

END_OF_DOCUMENT_TOKEN_TO_BE_REPLACED

To coincide with the publication of my article, “What Torture Is, and Why It’s Illegal and Not ‘Poor Judgment,’” in which I revisited the scandalous whitewash of the Justice Department report into the conduct of John Yoo and Jay Bybee (the lawyers who sought to redefine torture in the notorious “torture memos” of August 2002), I reproduce below a transcript of the statements made by the “high-value detainee” Abu Zubaydah during interviews with representatives of the International Committee of the Red Cross, following his transfer to Guantánamo from secret CIA prisons in September 2006.

END_OF_DOCUMENT_TOKEN_TO_BE_REPLACED

A major new report on secret detention policies around the world, conducted by four independent UN human rights experts, concludes that, “On a global scale, secret detention in connection with counter-terrorist policies remains a serious problem,” and that, “If resorted to in a widespread and systematic manner, secret detention might reach the threshold of a crime against humanity.”

The 226-page report, published on Wednesday in an advance unedited version, is the culmination of a year-long Joint Study by the Special Rapporteur on torture and other cruel, inhuman or degrading treatment or punishment, the Special Rapporteur on the promotion and protection of human rights and fundamental freedoms while countering terrorism, the Working Group on Arbitrary Detention, and the Working Group on Enforced or Involuntary Disappearances. It will be presented to the UN Human Rights Council in March.

END_OF_DOCUMENT_TOKEN_TO_BE_REPLACED

Binyam Mohamed is a British resident, seized in Pakistan in April 2002, who was held in Pakistani custody, supervised by US agents, until July 2002, when he was sent by the CIA to be tortured for 18 months in Morocco, and was tied in with a “dirty bomb plot” that never even existed. After his ordeal in Morocco, he spent four months in the CIA’s “Dark Prison” in Kabul, and was then flown to Guantánamo in September 2004.

For the last 15 months, Mohamed has watched as two British High Court judges have tried to release to the public information conveyed by the US intelligence services to their British counterparts regarding his torture in Pakistan, prior to his rendition to Morocco.

END_OF_DOCUMENT_TOKEN_TO_BE_REPLACED

In a world exclusive, Andy Worthington, author of The Guantánamo Files, reveals new information, from a source in Libya, about Ibn al-Shaykh al-Libi, the former US “ghost prisoner” who died in a Libyan jail last month, focusing, in particular, on the prisons in which he was held, and the ways in which torture was used by his interrogators.

Since the story first emerged last month that Ibn al-Shaykh al-Libi (whose real name was Ali Abdul Hamid al-Fakheri) had died in a Libyan prison, speculation has been rife that the Libyan newspaper Oea, which claimed that he had died by committing suicide, was covering up the fact that he had actually been murdered.

Andy Worthington is the author of The Guantánamo Files: The Stories of the 774 Detainees in America’s Illegal Prison (published by Pluto Press, distributed by Macmillan in the US, and available from Amazon — click on the following for the US and the UK). To receive new articles in your inbox, please subscribe to my RSS feed, and see here for my definitive Guantánamo prisoner list, published in March 2009. Visit his website at: www.andyworthington.co.uk.

The “Suicide” Of Ibn al-Shaykh al-Libi: Why The Media Silence? by Andy Worthington

NEW YORK – The CIA today released still-highly redacted documents in which Guantánamo Bay prisoners describe abuse and torture they suffered in CIA custody. The documents were released as part of an American Civil Liberties Union Freedom of Information Act FOIA lawsuit seeking uncensored transcripts from Combatant Status Review Tribunals CSRTs that determine if prisoners held by the Defense Department at Guantánamo qualify as “enemy combatants.” In previously released versions of the documents, the CIA had removed virtually all references to the abuse of prisoners in their custody; the documents released today are still heavily blacked out but include some new information. END_OF_DOCUMENT_TOKEN_TO_BE_REPLACED

A red herring is a fallacy in which an irrelevant topic is used to divert attention from the original issue. The furor over House Speaker Nancy Pelosi’s knowledge of the Bush/Cheney administration’s use of torture is the latest Washington noise that conveniently diverts attention from the illegitimate “war on terrorism” that continues to serve as the justification for torture, murder and war.

In a series of bumbling statements, Pelosi has denied her knowledge of the extent of the Bush/Cheney administration’s use of torture and other “enhanced interrogation techniques”.

Pelosi admits that she was aware, as early as September 2002, that “enhanced interrogation” techniques were being explored by the Bush/Cheney’s Office of Legal Counsel as legal options, but that she was not told that they were being used. A timeline from the CIA and statements from well-placed (but unnamed) Democratic Party sources refute Pelosi’s claim.

END_OF_DOCUMENT_TOKEN_TO_BE_REPLACED

As the Obama administration prepares to relaunch Dick Cheney and David Addington’s reviled Military Commissions (with claims that they will be used for less than 20 of the 240 prisoners still held), senior officials have been largely silent about the eventual fate of the rest of the prison’s population, with the exception of a few recent remarks indicating that they are also thinking of pressing for a form of “preventive detention” for 50 to 100 of the prisoners.

The irony — that all the prisoners have been enduring a form of “preventive detention” for over seven years — is apparently lost on the government, which has also maintained a resolute silence in response to a handful of habeas corpus cases (in which the prisoners are seeking to have their cases dismissed by the courts, as mandated by the Supreme Court last June) that have resulted in judges pouring scorn on the government’s supposed evidence.