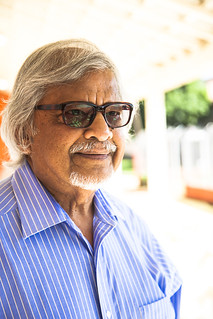 END_OF_DOCUMENT_TOKEN_TO_BE_REPLACED

(SOAPBOX #93) – Cindy hosts Arun Gandhi, grandson of Mohandas K., famously known as the “Mahatma” – or great-souled one.  (He would have hated that, tolerating only being treated as an average man!)  Nevertheless, it was that man who invented what he called satygraha (or “militant nonviolence”) and thereby changed the course of our whole world, inspiring leaders like Martin Luther King and many others, often less famed – but no less a stout and influential hero for peace.  [Such as Badshah Khan.  END_OF_DOCUMENT_TOKEN_TO_BE_REPLACED

The fact that the fifth grandson of legendary peace activist Mahatma Gandhi, should be forced to resign as head of his own peace institute in the United States, after critical remarks he had made about Israeli policy, should set alarm bells ringing — not one, but two sets of bells. On the one hand, his forced resignation seemed to confirm the fear that anyone in the United States who dared criticize Israeli policy as aggressive, would be dubbed a “bigot” or “anti-semite,” and forced to withdraw from public life. On the other hand, however, a different alarm has been sounded, one that warns that such blanket condemnation of any criticism of Israeli policy, will boomerang, and force an open, honest, no-holds-barred debate on a crucial political and moral issue. So, from this standpoint, I say, let the alarm bells ring.