This is a brief Addendum to the Introduction to my Law of Value video series. It gives some advice on how to watch these videos, cautioning to think critically about the way we contextualize information online.

END_OF_DOCUMENT_TOKEN_TO_BE_REPLACED 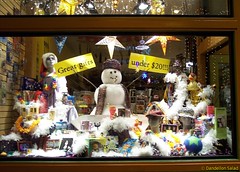 [Here’s a yo-yo. Let’s say it took an hour to make, parts and everything. And here’s a bag of high-fructose jelly beans. Let’s say they took 20 minutes to make. What if they both sold for $5, despite having different labor contents? Wouldn’t this be a big problem for Marx’s value theory?

END_OF_DOCUMENT_TOKEN_TO_BE_REPLACED

One of the more common objections raised to Marx’s theory of value, at least here in the theoretical void of cyberspace, is the objection posed by subjective value theory. Though these modern objections often take quite a crude, simplistic tone, they are echoes of a rather old debate, one that dates back to debates between Marxists and Austrian economists that took place in the late 1800′s and early 1900′s. END_OF_DOCUMENT_TOKEN_TO_BE_REPLACED

Law of Value 7: Production and Exchange

We get into trouble anytime we try to understand something in isolation. The true meaning of things exist not buried inside them but in their relation to other things. Take money for instance. The meaning of this rectangular piece of paper covered in strange hieroglyphics can only be understood when we look at the role money plays in the complex coordination of modern capitalist production. Take away capitalist production and this rectangular piece of paper loses its meaning.

END_OF_DOCUMENT_TOKEN_TO_BE_REPLACED

If you spend any time reading about Marx’s theory of value on the internet you probably will come across some version of this asinine excuse for a critique called “the mudpie argument.” The basic style of the mudpie argument is similar to many advanced by those who know nothing about Marx’s theory of value: one constructs a ridiculous strawman argument that has nothing to do with Marx and then proceeds to knock it down with “devastating” brilliance, moral outrage, and a few clever asides about Stalinism. The MudPie argument goes something like this: END_OF_DOCUMENT_TOKEN_TO_BE_REPLACED

This phenomenon where objects have social power, in which things act as if they have a will of their own, is what Marx sought to unravel with his notion of “the fetishism of commodities.” When Marx talked about fetishism he wasn’t talking about whips and chains and leather outfits. He was talking about the way the relations between producers in a capitalist society take the form of relations between things. END_OF_DOCUMENT_TOKEN_TO_BE_REPLACED

This is a brief Addendum to the Introduction to my Law of Value video series. It gives some advice on how to watch these videos, cautioning to think critically about the way we contextualize information online.

END_OF_DOCUMENT_TOKEN_TO_BE_REPLACED

[…] Our private labor doesn’t immediately become social. It must become value in order to be social. But in becoming value it is disciplined by socially necessary labor time. SNLT acts as an external force which disciplines our private labor, constantly compelling us to work more efficiently, yet never actually making our work easier or more fulfilling. SNLT creates the possibility for super-profits when one produces under the SNLT, and the search for super-profits drives much of the mad, chaotic development of the productive forces of a capitalist society, generating all sorts of unforeseen consequences. END_OF_DOCUMENT_TOKEN_TO_BE_REPLACED

This antagonism between the use value and exchange value of labor power expresses a social antagonism between capitalists and workers. Capitalists and workers have opposing interests. Workers want their means of subsistence: housing, food, clothes, beer. They want use-values. Capitalists aren’t interested in use-values. They are after exchange-value. They want to expand the size of their capital by making a profit. In order for either class to get what the want they need the other. The workers must sell themselves for a wage in order to survive. The capitalist must hire workers in order to exploit them for profits. Yet despite this codependence their interests are entirely antagonistic. The more the workers are paid in wages the less profit the capitalist makes. The more profit the capitalist makes the more impoverished the working class. END_OF_DOCUMENT_TOKEN_TO_BE_REPLACED

June 13, 2010 — “And this is where any social theory must begin: with a study of the productive activity of people as they work to create the world they live in. Not only is this the best starting place for an analysis of society, it is also the best starting point for a radical social theory whose aim is to investigate the possibility of changing the world. If we realize that human society is not the result of some natural or divine eternal logic but merely the creation of our own labor then that means that we have the power to mold and shape that society as we see fit. In a capitalist society these creative powers take the form of an external world of value and capital that acts back upon society, shaping it against the will of its creators. Yet, in the end the world of capital is nothing but the product of our own creation. If we truly want to change the world it is not up to nature, God, fate or experts, but up to us. This is the radical challenge of the law of value.” END_OF_DOCUMENT_TOKEN_TO_BE_REPLACED

You may have heard of the book by Noam Chomsky (and Ed Herman) with the same title as this video. But actually the ideas in this video are based on a different book by the same title, “Manufacturing Consent” by Michael Burawoy, which was written in 1979 years before the Chomsky book.

Rather than argue the consent to the social order is impose[d] upon people from above through the media, as Chomsky argues in his book, Burawoy argues that the structure of capitalist social relations generates its own illusions, ideology and consent. Chomsky would have done well to read Burawoy’s work before he wrote his own.

Full text can be read at:
Kapitalism101

END_OF_DOCUMENT_TOKEN_TO_BE_REPLACED

Frederick Taylor, founder of scientific management, was one of the most influential thinkers on the labor process.

Full text can be read at:
Kapitalism101 (no longer available)

END_OF_DOCUMENT_TOKEN_TO_BE_REPLACED

Why does capitalism go into crisis? In this video I attempt to summarize the basic ideas behind the theory of the falling rate of profit, often considered the corner-stone of crisis theory.