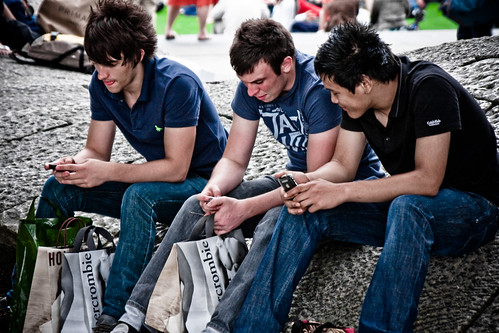 END_OF_DOCUMENT_TOKEN_TO_BE_REPLACED

In college, Economics 101 is often described as the social science discipline that deals with the production, distribution and consumption of goods and services. MIT Economist Paul Samuelson liked to focus on scarcity, or more specifically, the allocation of scarce resources. “Abundance” was always a pretty word with an idyllic connotation for Professor Samuelson. I often wonder why there weren’t a few classes about the real-life consequences of abundance, along with scarcity and people’s material welfare.

END_OF_DOCUMENT_TOKEN_TO_BE_REPLACED

Everywhere I look outside my home I see people busy on their high tech devices, while driving, while walking, while shopping, while in groups of friends, while in restaurants, while waiting in doctor offices and hospitals, while sitting in toilets – everywhere.  While connected electronically, they are inattentive to and disconnected in physical reality.

People have been steadily manipulated to become technology addicted.  Technology is the opiate of the masses.

END_OF_DOCUMENT_TOKEN_TO_BE_REPLACED

Today, U.S. Sens. Al Franken (D-Minn.), chairman of the Judiciary Subcommittee on Privacy, Technology and the Law, and Richard Blumenthal (D-Conn.) introduced legislation that would require companies like Apple and Google as well as app developers to receive express consent from users of mobile devices like smartphones and tablets before sharing information about those users’ location with third parties. The bill, called the Location Privacy Protection Act, would close current loopholes in federal law to ensure that consumers know what location information is being collected about them and allow them to decide if they want to share it.

END_OF_DOCUMENT_TOKEN_TO_BE_REPLACED

It is now inconceivable that our world could function without the 5 billion cell phones used globally.  The new book by Devra Davis “Disconnect” deserves your attention.  Indeed, if you use a cell phone a lot it should be mandatory reading.

It also seems inconceivable that the trillion dollar cell phone industry and governments worldwide could have pushed this technology without ever having solid research results proving the safety of cell phones.  If true that would be deadly frightening.  But that is exactly the reality.

END_OF_DOCUMENT_TOKEN_TO_BE_REPLACED END_OF_DOCUMENT_TOKEN_TO_BE_REPLACED

Today Congressman Dennis J. Kucinich (D-OH) announced his intent to introduce a bill to create a new national research program to study cell phones and health, require an update of the decades-old Specific Absorption Rate (SAR), and grant a consumer’s right-to-know by providing for warning labels on cell phones.

“Consumers have a right to know whether they are buying the phone with the lowest – or the highest – level of exposure to cell phone radiation. They also deserve to have up to date standards, which are now decades old,” said Kucinich.

END_OF_DOCUMENT_TOKEN_TO_BE_REPLACED

A US Appeals Court weighs a government petition on whether to allow the police to track down suspected criminals through cell-phone signals without a warrant.

The Federal Appeals Court in Philadelphia has begun working on a government appeal meant to authorize the law enforcement to obtain cell-phone tracking information of suspected individuals from telecommunication companies without having to give a possible reason for their probe.

via US seeks cell phone tracking of suspects without warrant

If you own a cell phone, you should care about the outcome of a case scheduled to be argued in federal appeals court in Philadelphia tomorrow. It could well decide whether the government can use your cell phone to track you – even if it hasn’t shown probable cause to believe it will turn up evidence of a crime.

The American Civil Liberties Union, the Electronic Frontier Foundation and the Center for Democracy and Technology will ask the court to require that the government at least show probable cause before it can track your whereabouts.

It Is Now Official: The U.S. Is A Police State + Paul Craig Roberts on Russia Today

The United Police States of America by Cindy Sheehan

“The three-year-old just walked right past me,” the Santa Rosa, CA, pediatrician reported, “talking into a cell phone.” That stark image of toddler attached to machine has troubled me. “I was amused at first,” the physician continued. “Then I felt sad. She was learning how to relate to people through a machine. It was so mechanical. Cell phones can connect people, but they also speed things up.” Must we rush even toddlers into machines?

“Half of British children aged 5 to 9 own a mobile phone. Some Experts are Unhappy,” headlines a June 23, 2009 article in the UK’s daily “The Times.” It reports that “Lawrie Challies, an emeritus professor of physics who has led the Government’s mobile-phone safety research, says that parents should not give children phones before secondary school.” (Mobile phones for children: a boon or a peril? Times Online – UK) University of Melbourne pediatrics professor Michael Carr-Gregg, a leading Australian psychologist, “is worried about the power of mobile phones to distract and overexcite” and “says that no children should be allowed a mobile phone until the age of 12.” The French Government bans sales of mobile phones to children under 6.

END_OF_DOCUMENT_TOKEN_TO_BE_REPLACED

Federal law enforcement may be able to track cellular phones users’ locations without the help of the telecommunications companies themselves, according to a report Sunday.