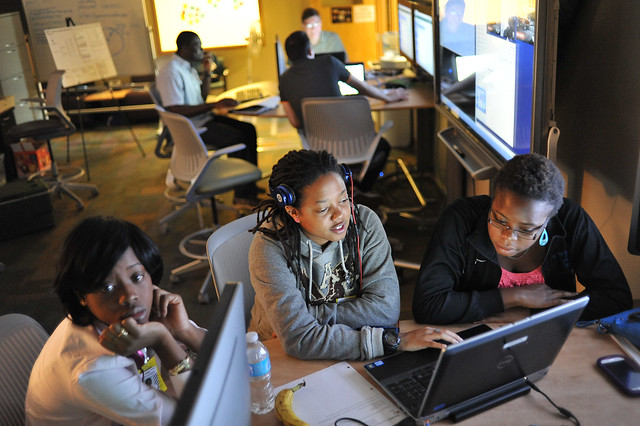 On the show this week, Chris Hedges talks to Cornell University Professor, Noliwe Rooks about how America’s public education system, under successive administrations, continues to be segregated along racial lines, and what is taught often shaped by business goals and ideas.

END_OF_DOCUMENT_TOKEN_TO_BE_REPLACED 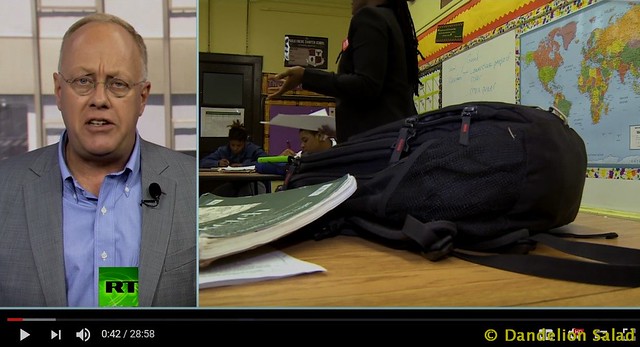 On this week’s episode of On Contact, Chris Hedges is joined by Diane Ravitch, former assistant secretary of education under President George H.W. Bush and author of Reign of Error: The Hoax of the Privatization Movement and the Danger to America’s Public Schools. RT Correspondent Anya Parampil looks at the growth of the charter school industry.

END_OF_DOCUMENT_TOKEN_TO_BE_REPLACED 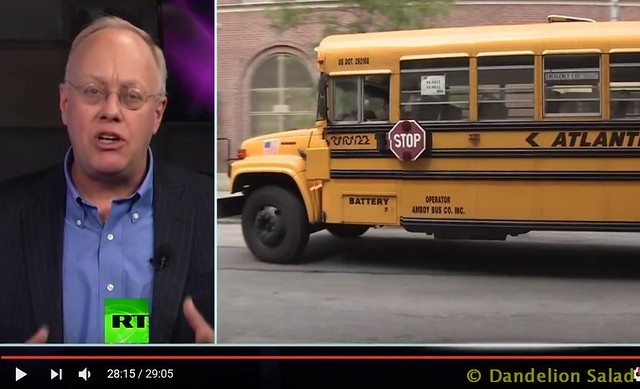 On this week’s episode of On Contact, Chris Hedges discusses how to salvage the American education system with Nikhil Goyal, author of “Schools on Trial: How Freedom and Creativity Can Fix Our Educational Malpractice”. RT Correspondent Anya Parampil explores the regimentation of education spurred by the No Child Left Behind Act.

END_OF_DOCUMENT_TOKEN_TO_BE_REPLACED

Sent to DS from Shepherd Bliss

I teach English at Montgomery High School in Santa Rosa, California. I love my school, my amazing colleagues, and the kids who enter my classroom each year. But I hate what is happening to public education.

From the national to the local level, our public schools are under attack, and that means our students are under attack. This attack takes more than one form. END_OF_DOCUMENT_TOKEN_TO_BE_REPLACED

For the last two years I have been pounding on Imam Fethullah Gulen’s web of organizations and his charter schools empire in the US. For years I have been marveling about the consistent media blackout on the Turkish Imam Fethullah Gulen’s past and present nefarious activities and highly suspicious partnerships with various US government agencies and elected officials. And of course for almost two years I have been writing and discussing Gulen with you over here at Boiling Frogs Post. Now the New York Times appears to be catching up; END_OF_DOCUMENT_TOKEN_TO_BE_REPLACED

The Controversial Muslim preacher has now extended his tentacles into schools in the United States, where he controls and operates more than 100 charter schools within a calculatively set up maze of dubious NGOs. Fethullah Gulen, whose organizations’ net worth is estimated to be somewhere between $22 billion and $50 billion, owns and operates over three hundred Madrasas around the world, including Pakistan, Central Asia, and the Caucasus. While Gulen’s suspicious and secretive Madrasas have been shut down and or restrained in countries such as Russia, Uzbekistan, and Turkmenistan, based on these governments’ justified suspicions that his schools had more than just education on their agendas, his rapidly and secretively expanding charter school empire here in the US has gone quite unnoticed and unacknowledged.

END_OF_DOCUMENT_TOKEN_TO_BE_REPLACED

The “Tough Choices or Tough Times” report of the National Commission on Skills in the Workplace, funded in large part by the Bill and Melinda Gates Foundation and signed by a bipartisan collection of prominent politicians, businesspeople, and urban school superintendents, called for a series of measures including: