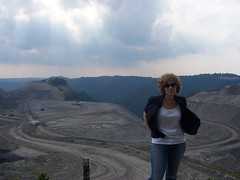 A film by brother/sister duo, Sam and Kate Fulbright to take a closer look at what climate change really means in the United States, and dive beyond the daunting numbers and graphs to meet the people and communities effected by the problem of climate change.

Learn more about getting involved at ShiftTheClimate.org

END_OF_DOCUMENT_TOKEN_TO_BE_REPLACED

Replaced video with similar ones on Mountain-Top Removal

Massive corporations are blowing up mountains and creating environmental ruins in West Virginia. All this devastation, just to extract some coal.

We went to West Virginia to investigate mountain-top removal — which a way of extracting coal from deposits under mountains. Instead of drilling into the mountain and sending men underground to take out the coal in the traditional way, they just take the whole top of a mountain off.

Hosted by Derrick Beckles | Originally aired on http://VICE.com in 2010

END_OF_DOCUMENT_TOKEN_TO_BE_REPLACED

There are some 614 coal-fired power plants in the United States, and it is up to us to shut them down. No one in the White House will do it. No one in Congress will do it. And no one at the coming U.N. climate change conference in Copenhagen will do it. We will build local movements to carry out acts of nonviolent civil disobedience to halt the burning of coal, or the polar ice caps will continue to dissolve, the Greenland ice sheet will disappear, the glaciers in the Alps, the Himalayas and Tibet will melt, and widespread droughts, rising sea levels and temperatures, acute food shortages, disease and gigantic mass migrations will envelop the globe. We are killing the ecosystem on which human life depends. One of the major polluters is coal, which supplies about half of the country’s electricity. NASA’s James Hansen has demonstrated that our only hope of getting our atmosphere back to a safe level—below 350 parts per million CO2—lies in stopping the use of coal to generate electricity. We are currently at 390 parts per million carbon dioxide.

END_OF_DOCUMENT_TOKEN_TO_BE_REPLACED

As proposed new rules may allow coal companies to expand mountain top removal mining, BILL MOYERS JOURNAL reports on local evangelical Christians who are turning to their faith to help save the earth. END_OF_DOCUMENT_TOKEN_TO_BE_REPLACED

WASHINGTON, Aug. 22 — The Bush administration is set to issue a regulation on Friday that would enshrine the coal mining practice of mountaintop removal. The technique involves blasting off the tops of mountains and dumping the rubble into valleys and streams.