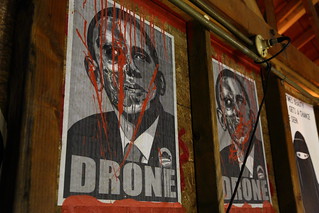 Go back to sleep America. The election is over. The “lesser of two evils” or as Glen Ford so aptly labeled him the “more effective evil” has won and all is well with the world.

You cast your faux fear vote for your faux president who was actually selected and installed by the corporate powers to serve the corporate police state that’s been put into place over the past 30 years and is now accelerating at an alarming rate. The irony is many actually believe their vote matters and global warming doesn’t exist and we’re fighting the good wars and fracking will save us from peak oil and taking our rights away will keep us safe and we’re number one.

END_OF_DOCUMENT_TOKEN_TO_BE_REPLACED

I remember sitting in the large impersonal lecture hall in my American History 101 class feeling a bit forlorn and overwhelmed. I’m a freshman at the University of South Carolina. It’s 1968, the Vietnam War is raging, Robert Kennedy and Martin Luther King have been assassinated, riots erupted in several U.S. cities, the antiwar movement, woman’s movement and civil rights movement are in full swing, my father’s currently serving in Military Intelligence, Saigon and my mom’s hospitalized after suffering 3rd degree burns because she’s having a nervous breakdown trying to deal with my father being at war leaving her responsible for raising 4 kids ranging in ages from 5 and 18. I feel like I’m hanging on by my fingernails.

END_OF_DOCUMENT_TOKEN_TO_BE_REPLACED

The moment I emerge above ground from the South Ferry Station in lower Manhattan I must appear lost. I’m not lost just disoriented, which happens from time to time when I arise from the subterranean bowels of the New York City subway system. The man standing at the corner asks, “Need a cab? “No.” I reply. “I need 55 Water Street. “ The cabbie points, “Two blocks down—on the right.” And off I go. I’m embarrassed to say I’ve never been to the Vietnam War Memorial in New York or Washington, D.C. for that matter.

END_OF_DOCUMENT_TOKEN_TO_BE_REPLACED

The woman standing at the podium may seem small and unassuming but don’t be fooled she’s a powerhouse and has a warning to share with the world. Vera Scroggins is a mother, a grandmother, resident of Susquehanna County, PA and a member of Citizens for Clean Water, a citizen-watch group of volunteers who keep an eye on the gas-drilling process by videotaping and keeping tabs on any problems or concerns. But today Vera’s in New York City at Saint John the Divine for the Global Frackdown and her message is loud and clear. “Don’t let them in.”

END_OF_DOCUMENT_TOKEN_TO_BE_REPLACED

I recently attended a matinee of Mike Daisey’s the “Agony and Ecstasy of Steve Jobs” at the Public Theatre in New York City. It’s a powerful, thought provoking tale and Daisey’s a masterful storyteller. Until Daisey stepped onto the stage before the performance began and told us briefly about his experience on the NPR radio show, “This American Life,” I didn’t realize the controversy surrounding the piece. He basically said he stands behind his work and anything false he’d removed from the script.

END_OF_DOCUMENT_TOKEN_TO_BE_REPLACED

After reading Lt. Col. Daniel L. Davis’ first hand account of his recent time spent in Afghanistan I’m more pissed off then ever. Yet another military officer comes forward to tell the truth about yet another ill-fated war we find ourselves engaged in. Another illegal war of aggression with no end in sight and surround sound corruption aided and abetted by an enabling government and a bloated military too full of its own hubris to admit defeat. END_OF_DOCUMENT_TOKEN_TO_BE_REPLACED

I believe Barack Obama was put into office to do what no Republican could ever have gotten away with. Obama has extend the wars, created new wars, extended the Bush tax cuts for the rich, given additional bail out money to the banks, allowed the health insurance industry to write the healthcare bill, extended the Patriot Act and signed the NDAA.

END_OF_DOCUMENT_TOKEN_TO_BE_REPLACED

I met Sgt. Shamar Thomas at the rally against Police Brutality on 10/22/11 in Union Square, New York City. This was right after his famous rant against the NYPD had gone viral. Sgt. Thomas served 14 months in Iraq and the war has been going on so long both his parents served there as well but when he came home and saw how the police were treating United States citizens, well; let’s just say he lost it. [see video]
END_OF_DOCUMENT_TOKEN_TO_BE_REPLACED

On Tuesday I found this information on the Occupy Wall Street website and was intrigued. Trust me these dames have been around the block more than once and good for them.

“Six years ago, 18 women attempted to enlist in the U.S. Military at the Recruitment Center in Times Square. Not only were we not welcomed, END_OF_DOCUMENT_TOKEN_TO_BE_REPLACED

END_OF_DOCUMENT_TOKEN_TO_BE_REPLACED

Van Jones is calling all people of conscience who care about America to get involved, stand up and help rebuild the American Dream.

Thursday evening I attended the “Rebuild the Dream” event in New York City hosted by Van Jones, featuring the musical group ROOTS with Shepard Fairey DJing.  Honestly I went to hear Jones but also to see Fairey whose “Make Art Not War” poster hangs in my living room.

END_OF_DOCUMENT_TOKEN_TO_BE_REPLACED

Monday evening I was honored to attend the premiere of the HBO film, “Too Big To Fail,” which opens on HBO May 23rd at 9 p.m. Curtis Hanson of “The Hand That Rocks the Cradle,” “The River Runs Wild,” “8 Mile” and “L.A. Confidential” fame, directs the film. Peter Gould bases the screenplay, on the book of the same name by Andrew Ross Sorkin about the financial collapse of Wall Street and the big banks.

END_OF_DOCUMENT_TOKEN_TO_BE_REPLACED