DemocracyNow.org – Once-secret documents reveal the FBI monitored Occupy Wall Street from its earliest days and treated the nonviolent movement as a potential terrorist threat. Internal government records show Occupy was treated as a potential threat when organizing first began in August of 2011.

END_OF_DOCUMENT_TOKEN_TO_BE_REPLACED

In his most extended interview in months, Julian Assange speaks to Democracy Now! from inside the Ecuadorian embassy in London where he has been holed up for nearly six months. Assange vowed WikiLeaks would persevere despite attacks against it. On Tuesday, the European Commission announced that the credit card company Visa did not break the European Union’s anti-trust rules by blocking donations to WikiLeaks.

END_OF_DOCUMENT_TOKEN_TO_BE_REPLACED 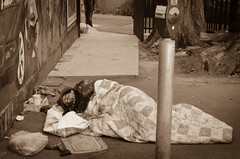 As the most expensive presidential election in U.S. history comes to an end, broadcaster Tavis Smiley and professor, activist Dr. Cornel West join us to discuss President Obama’s re-election and their hopes for a national political agenda in and outside of the White House during Obama’s second term. END_OF_DOCUMENT_TOKEN_TO_BE_REPLACED

Image by By League of Women Voters of California via Flickr

Turn off your TV.

Commentary, results, and news via the Internet.

END_OF_DOCUMENT_TOKEN_TO_BE_REPLACED

Much of the East Coast is shut down today as residents prepare for Hurricane Sandy, a massive storm that could impact up to 50 million people from the Carolinas to Boston. The storm has already killed 66 people in the Caribbean where it battered Haiti and Cuba. END_OF_DOCUMENT_TOKEN_TO_BE_REPLACED

Alan Maass reports on the surge of struggles around the U.S. against Wal-Mart, including the outcome of a strike at the company’s giant distribution center in Illinois.
SocialistWorker.org
October 10, 2012

Image by By Matt Hamilton @ Neon Tommy via Flickr

IN WAREHOUSES and stores around the country, Wal-Mart workers are putting a new spin on the company’s famous slogan “Save money, live better.” Best of all, they’re beginning to see some concrete victories.

In a high-profile battle in Elwood, Ill., southwest of Chicago, workers at the largest warehouse in the Wal-Mart distribution chain returned to their jobs victorious after a three-week strike. The 38 workers won promises that their demands about harassment and management retaliation will be addressed–and they will get full wages for the time they were on strike.

END_OF_DOCUMENT_TOKEN_TO_BE_REPLACED

There was something missing from the release of a tape showing Mitt Romney pandering to fat cats in Boca Raton, Florida with these very inflammatory words: “There are 47 percent who are with him, (Obama) who are dependent upon government, who believe that they are victims, who believe the government has a responsibility to care for them, who believe that they are entitled to health care, to food, to housing, to you name it. These are people who pay no income tax.” Romney said his job “is not to worry about those people.”

END_OF_DOCUMENT_TOKEN_TO_BE_REPLACED

DemocracyNow.org – The Obama administration has filed an emergency appeal of a federal judge’s decision to block a controversial statute that gave the government the power to carry out indefinite detention. Judge Katherine Forrest ruled against a provision in the National Defense Authorization Act, or NDAA, authorizing the imprisonment of anyone deemed a terrorism suspect anywhere in the world without charge or trial. A group of journalists, scholars and political activists had brought the case, arguing the provision was so broad it could easily infringe on freedom of speech. END_OF_DOCUMENT_TOKEN_TO_BE_REPLACED

Image by Steve Rhodes by Public Citizen via Flickr

DemocracyNow.org – As President Obama accepts the Democratic nomination to seek four more years in the White House, we host a debate on his presidency with Glen Ford of Black Agenda Report and Michael Eric Dyson, professor at Georgetown University and author of numerous books. Ford calls Obama the “more effective evil” for embracing right-wing policies and neutralizing effective opposition, while Dyson argues Obama provides the best and obvious choice for progressive change within the confines of the U.S. political system.

END_OF_DOCUMENT_TOKEN_TO_BE_REPLACED

DemocracyNow.org – When Democracy Now! senior producer Mike Burke attempted to interview billionaire casino magnate and Republican donor Sheldon Adelson inside the Republican National Convention, a woman identified as Adelson’s daughter grabbed our video camera, tried to take it into a private suite and then threw the camera to the ground. END_OF_DOCUMENT_TOKEN_TO_BE_REPLACED

END_OF_DOCUMENT_TOKEN_TO_BE_REPLACED

DemocracyNow.org – The past two weeks have witnessed the worst forest fires in Colorado history, a deadly Mid-Atlantic storm that left 23 dead and four million without power, and a record shattering heatwave across the East Coast and Midwest that has not seen since the Dust Bowl. More than 2,000 heat records have been broken in the past week. END_OF_DOCUMENT_TOKEN_TO_BE_REPLACED

DemocracyNow.org – Paraguayan President Fernando Lugo has been ousted in what he has described as a parliamentary coup. On Friday, the Paraguayan Senate voted 39-to-4 to impeach Lugo, saying he had failed in his duty to maintain social order following a recent land dispute which resulted in the deaths of six police officers and 11 peasant farmers. A former priest, Lugo was once called the “Bishop of the Poor” and was known for defending peasant rights. Argentina, Brazil, Venezuela, Chile and Uruguay have all condemned Lugo’s ouster, but the question remains whether the Obama administration will recognize the new government. END_OF_DOCUMENT_TOKEN_TO_BE_REPLACED