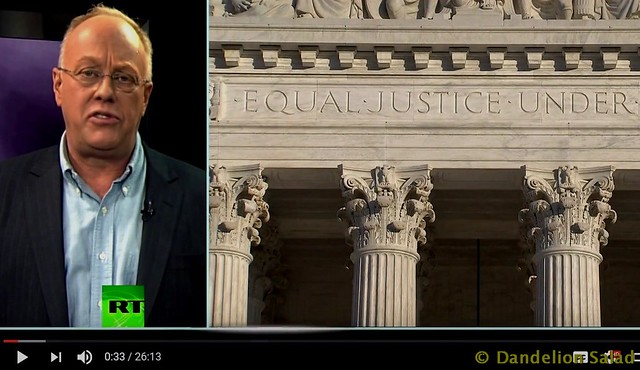 On this week’s episode of On Contact, Chris Hedges discusses restoring America’s justice system with legal scholar Edgar Cahn. Cahn is a law professor, former counsel and speechwriter to Robert F. Kennedy, and co-founder of the Antioch School of Law which placed emphasis on serving the poor and trained prospective lawyers in social activism. RT Correspondent Anya Parampil examines the collapse of our legal system.

END_OF_DOCUMENT_TOKEN_TO_BE_REPLACED

Ralph Nader speaks at a meeting about whistleblowers in Yale Law School, April 1, 2014.

As Jim Shelton reported in the New Haven Register, “Political firebrand Ralph Nader tore into the Obama administration’s claims of transparency Tuesday at Yale University, saying government spying and unchecked executive authority leaves the U.S. teetering on the verge of being a police state.” END_OF_DOCUMENT_TOKEN_TO_BE_REPLACED