END_OF_DOCUMENT_TOKEN_TO_BE_REPLACED

Factoid: A hypothesis, rumor or story so consonant with peoples’ preconceptions that it is accepted as a fact or working assumption, even though it often is made up a priori. Among the most notorious examples are the ideas of diminishing returns, equilibrium, that privatized ownership is inherently more efficient than public management, and that trickle-down economics works. (See Junk Science.)

END_OF_DOCUMENT_TOKEN_TO_BE_REPLACED

Joseph Stiglitz couldn’t believe his ears.  Here they were in the White House, with President Bill Clinton asking the chiefs of the US Treasury for guidance on the life and death of America’s economy, when the Deputy Secretary of the Treasury Larry Summers turns to his boss, Secretary Robert Rubin, and says, “What would Goldman think of that?”

END_OF_DOCUMENT_TOKEN_TO_BE_REPLACED

Rather than expanding the money supply, quantitative easing (QE) has actually caused it to shrink by sucking up the collateral needed by the shadow banking system to create credit. The “failure” of QE has prompted the Bank for International Settlements to urge the Fed to shirk its mandate to pursue full employment, but the sort of QE that could fulfill that mandate has not yet been tried.

END_OF_DOCUMENT_TOKEN_TO_BE_REPLACED

Insolvent! That would be Detroit, which gave us the Supremes and the vehicles that fueled our happy motoring paradise for decades. Unfortunately, after years of decline, the Motor City finally filed for bankruptcy protection yesterday — a move that was not entirely unexpected. That’s right — $18 billion in liabilities is at stake — a record for the US. Is this the first domino that might just validate Meredity Whitney’s 2011 prediction of a wave of muni defaults? END_OF_DOCUMENT_TOKEN_TO_BE_REPLACED

The Federal Reserve’s QE3 has flooded the stock and bond markets with low-interest liquidity that makes it profitable for speculators to borrow cheap and make arbitrage gains buying stocks and bonds yielding higher dividends or interest. In principle, one could borrow at 0.15 percent (one sixth of one percent) and buy up stocks, bonds and real estate throughout the world, collecting the yield differential as arbitrage. END_OF_DOCUMENT_TOKEN_TO_BE_REPLACED

END_OF_DOCUMENT_TOKEN_TO_BE_REPLACED

On July 1, interest rates will double for millions of students – from 3.4% to 6.8% – unless Congress acts; and the legislative fixes on the table are largely just compromises. Only one proposal promises real relief – Sen. Elizabeth Warren’s “Bank on Students Loan Fairness Act.” This bill has been dismissed out of hand as “shameless populist demagoguery” and “a cheap political gimmick,” but is it? Or could Warren’s outside-the-box bill represent the sort of game-changing thinking sorely needed to turn the economy around?

END_OF_DOCUMENT_TOKEN_TO_BE_REPLACED

Quantitative easing (QE) is supposed to stimulate the economy by adding money to the money supply, increasing demand. But so far, it hasn’t been working. Why not? Because as practiced for the last two decades, QE does not actually increase the circulating money supply. It merely cleans up the toxic balance sheets of banks. A real “helicopter drop” that puts money into the pockets of consumers and businesses has not yet been tried. Why not?  Another good question . . . .

END_OF_DOCUMENT_TOKEN_TO_BE_REPLACED

The “Federal Reserve Bank” (Fed) is not part of the United States Government. The Fed is a private, for-profit corporation ultimately owned by eight elite banking families: 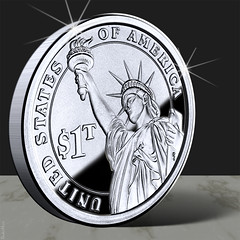 The trillion dollar coin actually represents one of the most important principles of popular prosperity ever conceived: the creation of money by sovereign governments, debt-free.

Last week on “The Daily Show,” Jon Stewart characterized the proposal that the White House circumvent the debt ceiling by minting a trillion dollar coin as an attempt to “just make shit up.”

END_OF_DOCUMENT_TOKEN_TO_BE_REPLACED

When the financial bubble burst in September 2008, U.S. and European governments responded by shifting bank losses onto their own balance sheets. The pretense is that real growth cannot resume until the banks and speculators are “made whole.” To cover the cost of bailing out the banks, governments now are trying to run budget surpluses. This adds fiscal deflation to the debt deflation left in the bubble’s wake, shrinking the economy at large. Governments are to raise taxes (or simply print new debt to swap for the financial sector’s bad loans and gambles) to reimburse financial institutions whose lending and outright gambling (not to mention the excursion into financial fraud) caused the crisis.

END_OF_DOCUMENT_TOKEN_TO_BE_REPLACED

QE3, the Federal Reserve’s third round of quantitative easing, is so open-ended that it is being called QE Infinity.  Doubts about its effectiveness are surfacing even on Wall Street.  The Financial Times reports:

Among the trading rooms and floors of Connecticut and Mayfair [in London], supposedly sophisticated money managers are raising big questions about QE3 — and whether, this time around, the Fed is not risking more than it can deliver.