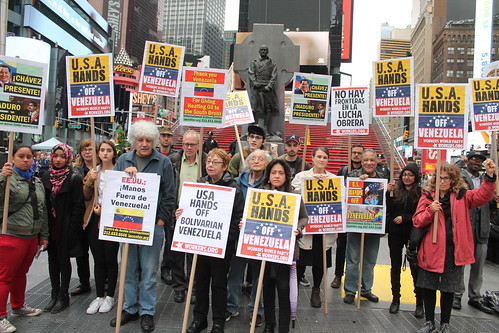 END_OF_DOCUMENT_TOKEN_TO_BE_REPLACED

The onset of the global economic crisis in mid 2008, symbolised by the collapse of some of Wall Street’s most iconic companies, led to soaring sales of Karl Marx’s seminal work Das Kapital, as many sought explanations to the tumultuous events unfolding.

Although written more than 100 years ago, this devastating and insightful dissection of how capital functions is still a powerful tool for people looking to understand and change the world.

END_OF_DOCUMENT_TOKEN_TO_BE_REPLACED

A Discussion with Federico Fuentes and Kiraz Janicke

As Venezuela’s Bolivarian Revolution enters a new decade of struggle and defiantly advances toward its goal of ‘21st Century Socialism,’ serious challenges to the future of the process emerging from both inside and outside the country still abound. As a result, key questions surrounding Venezuela’s mounting tensions with the West, the role played by its fiery and outspoken leader Hugo Chavez, and the future of the process itself remain as relevant today as ever before. Australian-based journalists and long-time Venezuela solidarity activists Federico Fuentes and Kiraz Janicke have been carefully following Venezuela’s ongoing political transformation for several years now, countering mainstream media spin and providing invaluable on-the-ground coverage and analysis about the process as it unfolds.

END_OF_DOCUMENT_TOKEN_TO_BE_REPLACED

Decisive battles between the forces of revolution and counter-revolution loom on the horizon in Venezuela.

The campaign for the September 26 National Assembly elections will be a crucial battle between the supporters of socialist President Hugo Chavez and the US-backed right-wing opposition.

But these battles, part of the class struggle between the poor majority and the capitalist elite, will be fought more in the streets than at the ballot box.

So far this year, there has been an escalation of fascist demonstrations by violent opposition student groups; the continued selective assassination of union and peasant leaders by right-wing paramilitaries; and an intensified private media campaign presenting a picture of a debilitated government in crisis — and on its way out.

END_OF_DOCUMENT_TOKEN_TO_BE_REPLACED

Addressing delegates at the International Encounter of Left Parties held in Caracas, November 19-21, Venezuelan President Hugo Chavez said that with the capitalist crisis and threat of war risking the future of humanity, “the people are clamoring” for greater unity of those willing to fight for socialism.

Chavez used his speech on November 20 to the conference, which involved delegates from 55 left groups from 31 countries, to call for a new international socialist organisation to unite left groups and social movements.

“The time has come for us to organise the Fifth International”, he said.

END_OF_DOCUMENT_TOKEN_TO_BE_REPLACED

What began as a coup aimed at deposing a millionaire landowner president, whose “crime” had been to gradually shift Honduras away from US control and implement mild pro-people reforms, has spurned on a mass resistance movement with the potential to revolutionise the country.

Roberto Micheletti, installed as president after the military overthrew the elected government of President Manuel Zelaya, told the September 30 Argentine daily Clarin: “We removed Zelaya because he was a leftist … This worried us.”

However, more than 100 days since Zeyala was kidnapped at gunpoint and exiled to Coast Rica, Micheletti has even more to worry about.

Zelaya is back in the country, in the confines of the Brazilian embassy, and there is a mobilised population demanding more than just their president restored.

END_OF_DOCUMENT_TOKEN_TO_BE_REPLACED

In Sao Paolo, Brazil, over August 17-19, Green Left Weekly journalists Kiraz Janicke and Federico Fuentes, together with journalists from Marea Socialista (Venezuela) and Alternativa Socialista (Argentina) spoke to Gilberto Rios, from the National Popular Resistance Front against the Coup in Honduras (FN).

END_OF_DOCUMENT_TOKEN_TO_BE_REPLACED

The US State Department and the coup regime in Honduras have publicly stated what many of us already knew: the June 28 military coup was not just directed against Honduran President Manuel Zelaya, but also Venezuela and the unfolding Latin American revolution.

On July 20, US state department spokesperson Phillip Crowley said he hoped Zelaya now understood that in “choosing a model government and a model leader for countries of the region to follow”, the US believes “the current leadership in Venezuela would not be a particular model”.

“If that is the lesson that President Zelaya has learned from this episode, that would be a good lesson.”

END_OF_DOCUMENT_TOKEN_TO_BE_REPLACED

On July 22, Venezuelan President Hugo Chavez again declared his complete support for the proposal by industrial workers for a new model of production based on workers’ control.

This push from Chavez, part of the socialist revolution, aims at transforming Venezuela’s basic industry. However, it faces resistance from within the state bureaucracy and the revolutionary movement.

Presenting his government’s “Plan Socialist Guayana 2009-2019”, Chavez said the state-owned companies in basic industry have to be transformed into “socialist companies”.

The plan was the result of several weeks of intense discussion among revolutionary workers from the Venezuelan Corporation of Guayana (CVG). The CVG includes 15 state-owned companies in the industrial Guayana region involved in steel, iron ore, mineral and aluminium production.

The workers’ roundtables were established after a May 21 workshop, where industrial workers raised radical proposals for the socialist transformation of basic industry.

Chavez addressed the workshop in support of many of the proposals.

END_OF_DOCUMENT_TOKEN_TO_BE_REPLACED

The Inter American Press Association IAPA is well-known for its mission to expose the Venezuelan government of President Hugo Chavez as a threat to free speech “all over the continent”.

These brave free speech warriors made a big deal this year about how they “dared” to hold a meeting in the Venezuelan capital, “defying” the repression of Chavez’s dictatorial regime.It turns out that the IAPA has found little to condemn in regards to the dictatorship that has installed itself by military force in Honduras.

It turns out that the IAPA has found little to condemn in regards to the dictatorship that has installed itself by military force in Honduras.

END_OF_DOCUMENT_TOKEN_TO_BE_REPLACED

Addressing the 400-strong May 21 workshop with workers from the industrial heartland of Guayana, dedicated to the “socialist transformation of basic industry”, Venezuelan President Hugo Chavez noted with satisfaction the outcomes of discussions: “I can see, sense and feel the roar of the working class.”

“When the working class roars, the capitalists tremble”, he said.

Chavez announced plans to implement a series of radical measures, largely drawn from proposals coming from the workers’ discussion that day.

The workers greeted each of Chavez’s announcements with roars of approval, chanting “This is how you govern!”

Chavez said: “The proposals made have emerged from the depths of the working class. I did not come here to tell you what to do! It is you who are proposing this.”

END_OF_DOCUMENT_TOKEN_TO_BE_REPLACED

At the centre of the Summit of the Americas held in Trinidad and Tobago over April 17-19, was the only country from the hemisphere not present — Cuba.

Speaking at the opening session, Nicaraguan President Daniel Ortega noted that while a large majority of the heads of states of the Americas were present, “there are two major absentees”.

The second was the nation of Puerto Rico, which continues to be an official colony of the United States — denied independence.

In 1962, Cuba was expelled from the Organisation of American States for having openly declared the nature of its revolution to be socialist — based on the ideology of “Marxism-Leninism”.

END_OF_DOCUMENT_TOKEN_TO_BE_REPLACED

Introduction. The following statement was issued on April 17 by six of the seven governments of the ALBA economic and social alliance in Latin America. (The seventh member, Ecuador, was unable to attend the meeting.) Speaking in Australia, Luis Bilbao, editor of the monthly magazine América XXI (published in Venezuela, Argentina and Uruguay), described the statement as “profound” and “historic.”

“We have seven governments of the world speaking in language that used to be the reserve of left parties only,” Bilbao said. “Gone is diplomatic language to discuss the political and economic situation facing Latin America and the Caribbean and their relation with the United States. Instead, we read that the draft statement of the Summit of the Americas is considered ‘inadequate and unacceptable.’ The ALBA countries declare that an entirely different approach to the world’s problems is required.

“In opposition to the Summit statement is a radical and far-reaching declaration of anti-capitalism and socialism. This is something which the world’s left wing parties must make known to the peoples of the world.”

END_OF_DOCUMENT_TOKEN_TO_BE_REPLACED

Sunday, 15 February, Venezuelans vote in a referendum on a proposed Constitutional Amendment that will allow for any candidate to stand for the Presidency, or indeed for any elective office, without restriction on the number of terms they may serve. Only the people’s vote will decide whether they are elected and how many terms they serve.

In other words, if President Hugo Chávez, who is already serving his second term under the provisions of the 1999 Constitution, wishes to stand for a third term, he may do so. Equally, the opposition mayor of Greater Caracas, Antonio Ledezma, may stand three or four times if he wants (and if the people vote for him).

This is no different from the practice here in the UK, where Margaret Thatcher won four elections for the Conservatives (although we did not have the privilege of voting for her personally as Prime Minister), and Tony Blair won three times for Labour. It is of course different from the situation in the U.S., where some sixty years ago a limit of two consecutive terms was introduced for the presidency.