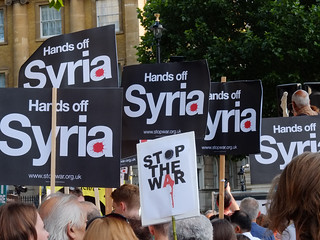 END_OF_DOCUMENT_TOKEN_TO_BE_REPLACED

It’s a moot question why the Syrian government is even meeting members of the so-called opposition Syrian National Coalition?

Both parties met for the first time in a Geneva negotiating room at the weekend. It was the first such meeting in nearly three years of conflict in the Arab country, which has caused some 130,000 deaths and a third of the population to be displaced.

END_OF_DOCUMENT_TOKEN_TO_BE_REPLACED

There is a good reason why Iran has been blocked from attending the Geneva II conference on Syria – because the meeting is not about finding a peaceful settlement. Rather, it is merely an American mechanism for engineering regime change in Syria.

END_OF_DOCUMENT_TOKEN_TO_BE_REPLACED

The fatal problem with the Geneva II negotiations on Syria, due to open next week in Switzerland, is that the process is furtively being treated by the US and its allies as a lever for regime change. It is their Plan B for regime change, where Plan A is the failed covert military tactic. That does not bode well for a successful, that is sustainable, settlement to a crisis that is nearly three years old with well over 100,000 deaths and nine million people – more than a third of the total population – displaced from their homes. It amounts to an illegal interference in the internal affairs of a sovereign state, and as such is doomed to fail.

END_OF_DOCUMENT_TOKEN_TO_BE_REPLACED

When adversaries are so illogical, their agenda needs to be simply ignored with contempt. And by contrast, an alternative, more reasonable agenda should be counter-posed and delivered with an ultimatum.

Take it or leave it.