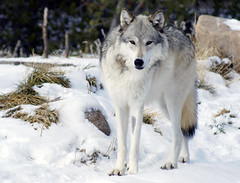 Gray wolves once ranged across North America. But by the 1930s, they were nearly extinct — trapped, poisoned and hunted by ranchers, farmers, and government agents. With protection under the 1973 Endangered Species Act, the wolf population rebounded. But wolves lost federal protection in 2011.

END_OF_DOCUMENT_TOKEN_TO_BE_REPLACED

Author of the best-selling books Captive State, The Age of Consent and Heat: How to Stop the Planet from Burning. George Monbiot is a columnist for the Guardian.

END_OF_DOCUMENT_TOKEN_TO_BE_REPLACED

A few weeks ago I read what I believe is the most important environmental book ever written. It is not Silent Spring, Small Is Beautiful or even Walden. It contains no graphs, no tables, no facts, figures, warnings, predictions or even arguments. Nor does it carry a single dreary sentence, which, sadly, distinguishes it from most environmental literature. It is a novel, first published a year ago, and it will change the way you see the world.

Cormac McCarthy’s book The Road considers what would happen if the world lost its biosphere, and the only living creatures were humans, hunting for food among the dead wood and soot. Some years before the action begins, the protagonist hears the last birds passing over, “their half-muted crankings miles above where they circled the earth as senselessly as insects trooping the rim of a bowl”. McCarthy makes no claim that this is likely to occur, but merely speculates about the consequences.

All pre-existing social codes soon collapse and are replaced with organized butchery, then chaotic, blundering horror. What else are the survivors to do? The only remaining resource is human. It is hard to see how this could happen during humanity’s time on earth, even by means of the nuclear winter McCarthy proposes. But his thought experiment exposes the one terrible fact to which our technological hubris blinds us: our dependence on biological production remains absolute. Civilization is just a russeting on the skin of the biosphere, never immune from being rubbed against the sleeve of environmental change. Six weeks after finishing The Road, I remain haunted by it.

So when I read the UN’s new report on the state of the planet over the weekend, my mind kept snagging on a handful of figures. There were some bright spots – lead has been removed from petrol almost everywhere and sulphur emissions have been reduced in most rich nations – and plenty of gloom. But the issue that stopped me was production.

Crop production has improved over the past 20 years (from 1.8 tons per hectare in the 1980s to 2.5 tons today), but it has not kept up with population. “World cereal production per person peaked in the 1980s, and has since slowly decreased”. There will be roughly 9 billion people by 2050: feeding them and meeting the millennium development goal on hunger [halving the proportion of hungry people] would require a doubling of world food production. Unless we cut waste, overeating, biofuels and the consumption of meat, total demand for cereal crops could rise to three times the current level.

There are two limiting factors. One, mentioned only in passing in the report, is phosphate: it is not clear where future reserves might lie. The more immediate problem is water. “Meeting the millennium development goal on hunger will require doubling of water use by crops by 2050.” Where will it come from? “Water scarcity is already acute in many regions, and farming already takes the lion’s share of water withdrawn from streams and groundwater.” Ten per cent of the world’s major rivers no longer reach the sea all year round.

Buried on page 148, I found this statement. “If present trends continue, 1.8 billion people will be living in countries or regions with absolute water scarcity by 2025, and two-thirds of the world population could be subject to water stress.” Wastage and deforestation are partly to blame, but the biggest cause of the coming droughts is climate change. Rainfall will decline most in the places in greatest need of water. So how, unless we engineer a sudden decline in carbon emissions, are we going to feed the world? How, in many countries, will we prevent the social collapse that failure will cause?

The stone drops into the pond and a second later it is smooth again. You will turn the page and carry on with your life. Last week we learned that climate change could eliminate half the world’s species; that 25 primate species are already slipping into extinction; that biological repositories of carbon are beginning to release it, decades ahead of schedule. But everyone is watching and waiting for everyone else to move. The unspoken universal thought is this: “If it were really so serious, surely someone would do something?”

On Saturday, for some light relief from the UN report (who says that environmentalists don’t know how to make whoopee?), I went to a meeting of roads protesters in Birmingham. They had come from all over the country, and between them they were contesting 18 new schemes: a fraction of the road projects the British government is now planning. The improvements to the climate change bill that Hilary Benn, the environment secretary, announced yesterday were welcome. But in every major energy sector – aviation, transport, power generation, house building, coal mining, oil exploration – the government is promoting policies that will increase emissions. How will it make the 60% cut that the bill enforces?

No one knows, but the probable answer is contained in the bill’s great get-out clause: carbon trading. If the government can’t achieve a 60% cut in the UK, it will pay other countries to do it on our behalf. But trading works only if the total global reduction we are trying to achieve is a small one. To prevent runaway climate change, we must cut the greater part — possibly almost all — of the world’s current emissions. Most of the nations with which the UK will trade will have to make major cuts of their own, on top of those they sell to us. Before long we will have to buy our credits from Mars and Jupiter. The only certain means of preventing runaway climate change is to cut emissions here and now.

Who will persuade us to act? However strong the opposition parties’ policies appear to be, they cannot be sustained unless the voters move behind them. We won’t be prompted by the media. The BBC drops Planet Relief for fear of breaching its impartiality guidelines: heaven forbid that it should come out against mass death. But it broadcasts a program – Top Gear – that puts a match to its guidelines every week, and now looks about as pertinent as the Black and White Minstrel Show.

The schedules are crammed with shows urging us to travel further, drive faster, build bigger, buy more, yet none of them are deemed to offend the rules, which really means that they don’t offend the interests of business or the pampered sensibilities of the Aga class. The media, driven by fear and advertising, are hopelessly biased towards the consumer economy and against the biosphere.

It seems to me that we are already pushing other people ahead of us down The Road. As the biosphere shrinks, McCarthy describes the collapse of the protagonist’s core beliefs. I sense that this might be happening already: that a hardening of interests, a shutting down of concern, is taking place among the people of the rich world. If this is true, we do not need to wait for the forests to burn or food supplies to shrivel before we decide that civilization is in trouble.

George Monbiot is the author of the best selling books The Age of Consent: a manifesto for a new world order and Captive State: the corporate takeover of Britain. He writes a weekly column for the Guardian newspaper. www.Monbiot.com