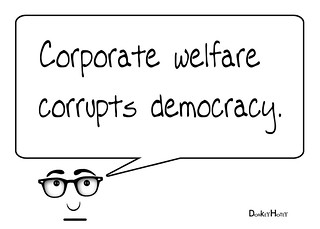 Consumer advocate Ralph Nader and anti-tax activist Grover Norquist spoke on issues where the left and right can come together at a National Press Club luncheon on Sept. 4, 2014.

END_OF_DOCUMENT_TOKEN_TO_BE_REPLACED

Like ravenous beasts of prey attacking a weakened antelope, the forces of subsidized capital and their mercenaries sunk their fangs into the United Auto Workers (UAW) and its organizing drive at the Volkswagen factory in Chattanooga, Tennessee. The UAW narrowly lost – 712 to 626 – and the baying pack of plutocrats exalted, as if they had just saved western civilization in the anti-union, lower-wage South.

END_OF_DOCUMENT_TOKEN_TO_BE_REPLACED

History never repeats itself exactly.  But it makes some pretty decent copies.  As I write this on March 29, 2011, we are winding down to the end of the so-called “debt-limit crisis,” or the possible end, or the continuation of it, or what have you.  Of course what is going on is not really about the debt-limit.  It is about the future of the federal government in the United States and its appropriate role.  As I wrote in my BuzzFlash@Truthout Commentary on Grover Norquist’s wet dream his 25-year campaign is focused only at the secondary level on taxation.  It is primarily about his stated goal of “shrinking the federal government to the size of a bathtub and then drowning it in the bathtub,” or as he used to more simply state it: “starve the beast.”