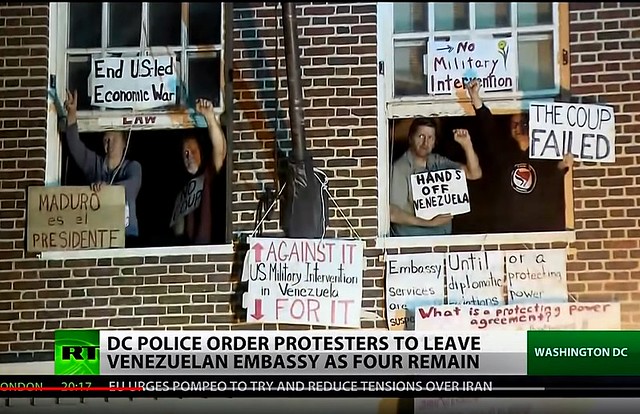 by Kevin Zeese and Margaret Flowers, from inside the Venezuelan embassy
Popular Resistance
May 15, 2019

Writing on Day 36 of the campaign to prevent a US-sponsored coup by protecting the Venezuelan Embassy from illegal takeover.

END_OF_DOCUMENT_TOKEN_TO_BE_REPLACED

Rev. Jackson: A progressives voice in DC must come from a movement in the streets

END_OF_DOCUMENT_TOKEN_TO_BE_REPLACED

Rachel reports on the dust up over Phil Gramm’s statement that Americans need to stop whining about the economy. Johnathon Alter weighs in.

Rachel reports on Fox News’ decision to give Jesse Jackson’s recording to the O’Reilly Factor and the way the story was handled by them where they said they had more of the tape but refused to air what they had, and their record of going after Jesse Jackson. Greg Mitchell weighs in.

Rachel reports on the conficting statements made by Carly Fiorina and John McCain on birth control and viagra and the campaign’s attempt to mask it’s extremely far right stances on women’s health issues. Chris Hayes from The Nation weighs in.

Max and the Marginalized: Free Evenings and Weekends (FISA)

Nader: Telecoms and Bush Above the Law