END_OF_DOCUMENT_TOKEN_TO_BE_REPLACED

It is possible to make a peace deal that would denuclearize North Korea, but don’t expect Donald Trump to deliver it, says Col. Lawrence Wilkerson.

END_OF_DOCUMENT_TOKEN_TO_BE_REPLACED 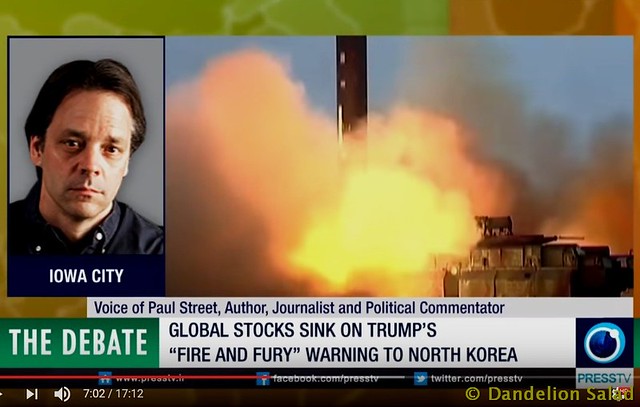 END_OF_DOCUMENT_TOKEN_TO_BE_REPLACED

Negotiating with the US over nuclear issues, sovereignty, peace and much else, is like playing card poker with a punk in a Wild West saloon. You’re never going to win because the punk makes up all the rules of the game. In fact, he can change the rules of the game as he goes along to make sure he always wins.

END_OF_DOCUMENT_TOKEN_TO_BE_REPLACED

Western so-called news media coverage of the escalating tensions on the Korean Peninsula is like watching a cross between a bad James Bond movie and a cheap horror flick about flesh-eating zombies.

It would be funny if the danger of war was not so serious and imminent. The disturbing direction of the Western media coverage is to set up North Korea – a poor impoverished country – for an all-out military attack by the world’s nuclear superpower psychopath – the United States.