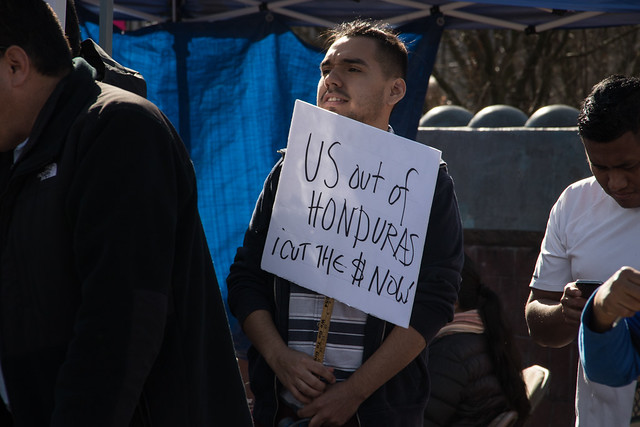 Image by Peg Hunter by Dandelion Salad via Flickr

The Grayzone’s Anya Parampil sat down for an exclusive interview with Honduran President Manuel Zelaya, on the 10th anniversary of the US-backed right-wing military coup that overthrew him.

END_OF_DOCUMENT_TOKEN_TO_BE_REPLACED 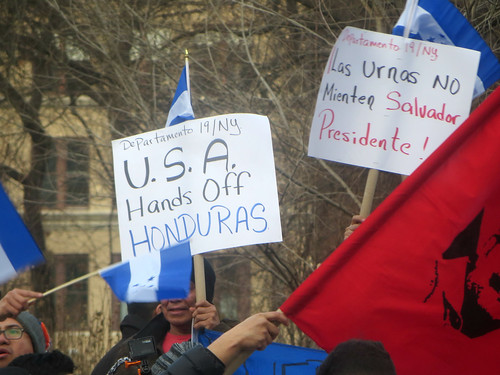 Dana Frank, Professor of History Emerita, University of California, Santa Cruz talks to Chris Hedges about America’s complicity in turning Honduras into a failed state, and its geopolitical consequences.

END_OF_DOCUMENT_TOKEN_TO_BE_REPLACED

Workers, students and activists have held a month-long general strike in Honduras to protest repression by the government of President Porfirio Lobo. Lobo came to power following elections under the regime of Roberto Micheletti, who seized power in a violent military coup against democratically elected President Manuel Zelaya in June 2009. Honduras is one of the world’s most violent countries, with a homicide rate four times higher than in Mexico, according to national statistics. In 2010, Honduras became the most dangerous country in the world for journalists, with this March being the deadliest month on record.

We speak to Gerardo Torres, an independent journalist and a leading member of the National Front of Popular Resistance in Honduras. [includes rush transcript]

END_OF_DOCUMENT_TOKEN_TO_BE_REPLACED

CARACAS, Venezuela — A U.S.-brokered accord that was supposed to return ousted Honduran President Manuel Zelaya to power has collapsed and his supporters pinned much of the blame Monday on the Obama administration.

Honduras’ Congress has made no plans to vote on whether to enact the agreement following remarks by Assistant Secretary of State Thomas Shannon that seemed to remove U.S. pressure.

END_OF_DOCUMENT_TOKEN_TO_BE_REPLACED

Deal Reached in Honduran Coup Crisis; Zelaya Restoration Would Depend on Vote by Honduran Congress

What began as a coup aimed at deposing a millionaire landowner president, whose “crime” had been to gradually shift Honduras away from US control and implement mild pro-people reforms, has spurned on a mass resistance movement with the potential to revolutionise the country.

Roberto Micheletti, installed as president after the military overthrew the elected government of President Manuel Zelaya, told the September 30 Argentine daily Clarin: “We removed Zelaya because he was a leftist … This worried us.”

However, more than 100 days since Zeyala was kidnapped at gunpoint and exiled to Coast Rica, Micheletti has even more to worry about.

Zelaya is back in the country, in the confines of the Brazilian embassy, and there is a mobilised population demanding more than just their president restored.

END_OF_DOCUMENT_TOKEN_TO_BE_REPLACED

100 days since the coup detat that ousted Manuel Zelaya, Fault Lines travels to Honduras to look at polarisation and power in the Americas, and finds resistance and repression in the streets.

END_OF_DOCUMENT_TOKEN_TO_BE_REPLACED

LeftViews is Socialist Voice’s forum for articles related to rebuilding the left in Canada and around the world, reflecting a wide variety of socialist opinion. In this article, an activist in the Honduran resistance meditates on the danger his country faces of a Haiti-style foreign military intervention.

Tegucigalpa, September 27, 2009 – The Honduras crisis has sparked great interest among thinkers of both Right and Left up and down the continent. Many people are reflecting on events, using all the analytical tools their knowledge permits. There is wide scope for speculation, mainly because – for most people – the actions of different forces have been so unexpected in character.

END_OF_DOCUMENT_TOKEN_TO_BE_REPLACED


[President of Honduras Manuel] Zelaya was deposed at gunpoint on June 28 and slipped back into his country on Monday [21 September], just two days before he was scheduled to speak before the United Nations.

END_OF_DOCUMENT_TOKEN_TO_BE_REPLACED

In Sao Paolo, Brazil, over August 17-19, Green Left Weekly journalists Kiraz Janicke and Federico Fuentes, together with journalists from Marea Socialista (Venezuela) and Alternativa Socialista (Argentina) spoke to Gilberto Rios, from the National Popular Resistance Front against the Coup in Honduras (FN).

END_OF_DOCUMENT_TOKEN_TO_BE_REPLACED

Deposed Honduran President Zelaya spoke about the political situation in Honduras and U.S.-backed efforts to negotiate a solution to the turmoil caused by a coup that had ousted him from power. He spoke about his plans to return and called on the United States to match its strong words of condemnation for the coup with actions. In his remarks he urged the Obama administration to cut off tens of millions of dollars in assistance to the de facto government and freeze the visas and assets of those involved in plotting his overthrow. Following his speech he answered questions from the audience. In Spanish with voiceover translation.

via A Conversation with Honduras President Zelaya 288665-1 : C-SPAN Video Library | Created by Cable. Offered as a Public Service.

END_OF_DOCUMENT_TOKEN_TO_BE_REPLACED

EXCLUSIVE: Ousted Honduran President Manuel Zelaya Speaks from Nicaraguan Border on Who’s Behind the Coup, His Attempts to Return Home, the Role of the United States and More

In a Democracy Now! national broadcast exclusive, ousted Honduran president Manuel Zelaya joins us from the Nicaragua-Honduras border for a wide-ranging interview on his attempts to return home, who’s behind the coup, the role of the United States, and much more. “I think the United States is going to lose a great deal of influence in Latin America if it does not turn the coup d’état around,” Zeleya says. “It will not be able to put forth its idea about democracy. It won’t be credible before anyone.” On his message to the Honduran people, Zelaya says they should “maintain their resistance against those who want to take their rights away…so that no one will be able to disrespect them, which is what the coup regime is doing today.” [includes rush transcript]

video: EXCLUSIVE: Ousted Honduran President Manuel Zelaya Speaks from Nicaraguan Border on Who’s Behind the Coup, His Attempts to Return Home, the Role of the United States and More

AMY GOODMAN: Governments around the world should continue sanctions against the coup regime in Honduras. Those are the comments of the Nobel Peace Prize-winning Costa Rican President Oscar Arias, who’s trying to mediate negotiations between ousted Honduran president and the coup leaders. He was speaking at a Latin American summit in Costa Rica a day after the US State Department’s decision Tuesday to revoke the visas of four Honduran coup officials, though the US has not cut off more than $180 million in economic aid.

END_OF_DOCUMENT_TOKEN_TO_BE_REPLACED

National Exclusive…Xiomara Castro de Zelaya, Wife of Ousted Honduran President, Calls on US to Aid Her Husband’s Return Home: “We Want Justice, We Want Peace, We Demand the Return to Democracy”