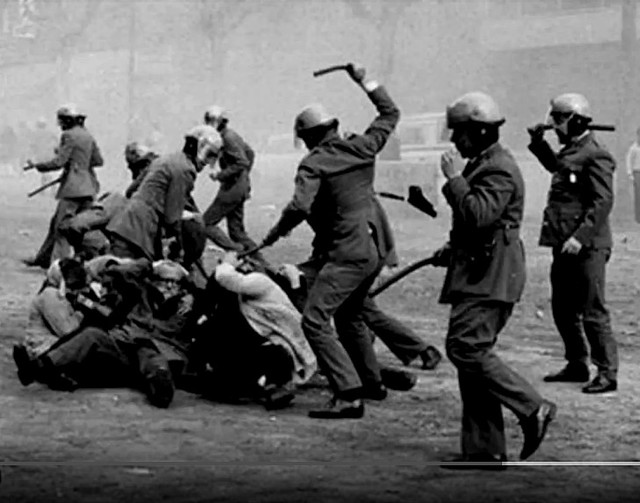 END_OF_DOCUMENT_TOKEN_TO_BE_REPLACED

Egypt has undergone many cycles of change since the revolution in January 2011, and making sense of these radical transformations in the heart of the Middle East has been challenging. We had the privilege of discussing the past, present and future of Egypt’s political landscape with Prof. Chomsky.

END_OF_DOCUMENT_TOKEN_TO_BE_REPLACED

Some parts of the Egyptian army have reportedly been put on high alert status – as the military’s ultimatum for President Morsi to resolve the violent crisis has now passed. Fresh clashes between government supporters and anti-Islamist protesters erupted earlier outside Cairo University after at least 18 people were said to have been killed there overnight. RT’s correspondents Bel Trew and Paula Slier are in the Egyptian capital right now. READ MORE: http://on.rt.com/snqlvb

END_OF_DOCUMENT_TOKEN_TO_BE_REPLACED

Jihan Hafiz reports thousands of Egyptians hit the streets rejecting the disbanding of Parliament, as the Egyptian military is moving towards full dictatorship

END_OF_DOCUMENT_TOKEN_TO_BE_REPLACED

The rumour mill is churning in the Persian Gulf with unconfirmed reports of a failed military coup against the Qatari ruler.

There were even media reports that American military helicopters had whisked the Emir and his wife to a safe unknown destination in the aftermath of the failed putsch, said to be have been attempted by high-ranking officers.

END_OF_DOCUMENT_TOKEN_TO_BE_REPLACED

A Berber group, known as the Tuaregs, have recently been instrumental in the overthrow of President Amadou Toumani Toure of Mali. Some of these Tuaregs are returning veterans, that had fought for Qaddafi in the Libyan military theater. Much like the Kurds of the Levant, Iran, Iraq, Turkey and Syria the Tuaregs/Berbers have had long-held, and enduring nationalist aspirations for an independent, autonomous and self-determining country. Although, some are indeed purported to be Islamist-linked, and indeed card-carrying members of the AQIM (Al-Qaeda in the Islamic Maghreb). The Tuaregs/Berbers are associated with a number of names/classifications, and may be called by the appellations of the Amazighs, the Kabyle or the Riffs also.

END_OF_DOCUMENT_TOKEN_TO_BE_REPLACED

We are facing soon another illegal war, an invasion to dismantle yet another country in “Western” i.e. U.S. interests.

Libya is the target nation this time, and already has “military advisers” from U.S., Britain and France, and perhaps also from Israel, on its soil. (See below).

Although genuine internal opposition to the regime exists, the Libyan “protesters” we see supported by a Western media frenzy are by and large a military force, now being trained and equipped by foreign powers who are intent on getting hold of Libyan oil to have it “privatized, i.e. to become foreign owned instead as it was nationalized by Gaddafi 40 years ago.

END_OF_DOCUMENT_TOKEN_TO_BE_REPLACED

Secret U.S. diplomatic cables recently published by the whistleblower website WikiLeaks revealed new details about how the U.S. manipulated last year’s U.N. climate talks in Copenhagen. Ecuador was one of the nations that lost funding after it refused to sign on to the U.S.-led Copenhagen Accord. Democracy Now! asks Ecuadoran President Rafael Correa about the latest WikiLeaks revelations on how the United States denied his country aid, the failed coup against him earlier this year, and his support for the controversial carbon market-based forest protection scheme known as REDD.

END_OF_DOCUMENT_TOKEN_TO_BE_REPLACED

(SOAPBOX #76) – Cindy sez: “We will be hosting Venezuelan/American Attorney and author Eva Golinger to talk about some recent South American events.”  Ms. Golinger is the author of The Chavez Code, which illuminates (using US documentation) the US’s profound part in the attempted overthrow of President Hugo Chavez in 2002.  We chat about the importance and the implications of Venezuela’s recent parliamentary elections, and last week’s coup attempt in Ecuador.  We also try to answer the age old question of why does the Huffington Post hate Hugo Chavez and Venezuela so?  I doubt you will find an hour on radio or tv that is packed with more relevant info than on today’s Soapbox.