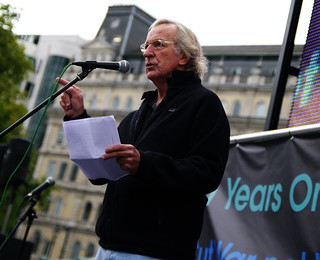 This week Cindy chats with journalist/filmmaker John Pilger about world events and his new film, Utopia.

Then young Angeleno revolutionary poet Matt Sedillo will perform one of his poems for us.

The critical moment in the political trial of the century was on 28 February when Bradley Manning stood and explained why he had risked his life to leak tens of thousands of official files. It was a statement of morality, conscience and truth: the very qualities that distinguish human beings. This was not deemed mainstream news in America; and were it not for Alexa O’Brien, an independent freelance journalist, Manning’s voice would have been silenced. Working through the night, she transcribed and released his every word. It is a rare, revealing document.

END_OF_DOCUMENT_TOKEN_TO_BE_REPLACED

The election campaign in Australia is being fought with the lives of men, women and children. Some drown, others are banished without hope to malarial camps. Children are incarcerated behind razor wire in conditions described as “a huge generator of mental illness”. This barbarism is considered a vote-winner by both the Australian government and opposition. Reminiscent of the closing of borders to Jews in the 1930s, it is smashing the façade of a society advertised as benign and lucky.

END_OF_DOCUMENT_TOKEN_TO_BE_REPLACED

I have known my postman for more than 20 years. Conscientious and good-humoured, he is the embodiment of public service at its best. The other day, I asked him, “Why are you standing in front of each door like a soldier on parade?”

END_OF_DOCUMENT_TOKEN_TO_BE_REPLACED

Imagine the aircraft of the President of France being forced down in Latin America on “suspicion” that it was carrying a political refugee to safety – and not just any refugee but someone who has provided the people of the world with proof of criminal activity on an epic scale.

END_OF_DOCUMENT_TOKEN_TO_BE_REPLACED

The dust in Iraq rolls down the long roads that are the desert’s fingers. It gets in your eyes and nose and throat; it swirls in markets and school playgrounds, consuming children kicking a ball; and it carries, according to Dr. Jawad Al-Ali, “the seeds of our death”. An internationally respected cancer specialist at the Sadr Teaching Hospital in Basra, Dr. Ali told me that in 1999, and today his warning is irrefutable. “Before the Gulf war,” he said, “we had two or three cancer patients a month. END_OF_DOCUMENT_TOKEN_TO_BE_REPLACED

The other day, I stood outside the strangely silent building where I began life as a journalist. It is no longer the human warren that was Consolidated Press in Sydney, though ghosts still drink at the King’s Head pub nearby. As a cadet reporter, I might have walked on to the set of Lewis Milestone’s The Front Page. Men in red braces did shout, “Hold the front page”, and tilt back their felt hats and talk rapidly with a roll-your-own attached indefinitely to their lower lip. You could feel the presses rumbling beneath and smell the ink.

END_OF_DOCUMENT_TOKEN_TO_BE_REPLACED

In the wake of Thatcher’s departure, I remember her victims. Patrick Warby’s daughter, Marie, was one of them. Marie, aged five, suffered from a bowel deformity and needed a special diet. Without it, the pain was excruciating. Her father was a Durham miner and had used all his savings. It was winter 1985, the Great Strike was almost a year old and the family was destitute. Although her eligibility was not disputed, Marie was denied help by the Department of Social Security. Later, I obtained records of the case that showed Marie had been turned down because her father was “affected by a Trade dispute”.

END_OF_DOCUMENT_TOKEN_TO_BE_REPLACED

What is modern propaganda? For many, it is the lies of a totalitarian state. In the 1970s, I met Leni Riefenstahl and asked her about her epic films that glorified the Nazis. Using revolutionary camera and lighting techniques, she produced a documentary form that mesmerized Germans; her ‘Triumph of the Will’  cast Hitler’s spell.

She told me that the “messages” of her films were dependent not on “orders from above,” but on the “submissive void” of the German public. Did that include the liberal, educated bourgeoisie? “Everyone,” she said.

END_OF_DOCUMENT_TOKEN_TO_BE_REPLACED

Last December, I stood with supporters of WikiLeaks and Julian Assange in the bitter cold outside the Ecuadorean embassy in London. Candles were lit; the faces were young and old and from all over the world. They were there to demonstrate their human solidarity with someone whose guts they admired. They were in no doubt about the importance of what Assange had revealed and achieved, and the grave dangers he now faced. Absent entirely were the lies, spite, jealousy, opportunism and pathetic animus of a few who claim the right to guard the limits of informed public debate.

END_OF_DOCUMENT_TOKEN_TO_BE_REPLACED

Project Censored: Important stories unreported or suppressed by the media most Americans watch or read.

In the week Lord Leveson published almost a million words about his inquiry into the “culture, practice and ethics” of Britain’s corporate press, two illuminating books about media and freedom were also published. Their contrast with the Punch and Judy show staged by Leveson is striking.

For 36 years, Project Censored, based in California, has documented critically important stories unreported or suppressed by the media most Americans watch or read. This year’s report is Censored 2013: Dispatches from the media revolution by Mickey Huff and Andy Lee Roth (Seven Stories Press). END_OF_DOCUMENT_TOKEN_TO_BE_REPLACED

In Peter Watkins’ remarkable BBC film, The War Game, which foresaw the aftermath of an attack on London with a one-megaton nuclear bomb, the narrator says: “On almost the entire subject of thermo-clear weapons, there is now practically total silence in the press, official publications and on TV. Is there hope to be found in this silence?”

The truth of this statement was equal to its irony. On 24 November, 1965, the BBC banned The War Game as “too horrifying for the medium of broadcasting”. This was false. The real reason was spelt out by the chairman of the BBC Board of Governors, Lord Normanbrook, in a secret letter to the Secretary to the Cabinet, Sir Burke Trend.

END_OF_DOCUMENT_TOKEN_TO_BE_REPLACED

What is the world’s most powerful and violent “ism”? The question will summon the usual demons, such as Islamism, now that communism has left the stage. The answer, wrote Harold Pinter, is only “superficially recorded, let alone documented, let alone acknowledged,” because only one ideology claims to be non-ideological, neither left nor right, the supreme way. This is liberalism.