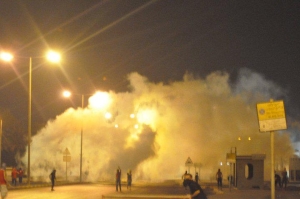 Press TV’s documentary program “The Clouds of Death” depicts the excessive use of tear gas in Bahrain by the police, as a means to suppress the unrest, which has resulted in the death of innocent people and disabilities in some.

END_OF_DOCUMENT_TOKEN_TO_BE_REPLACED

democracynow.org – The U.S.-backed monarchy in Bahrain continues the crackdown on protesters, with reports of many injuries and at least one death over the weekend. We speak to Zainab Alkhawaja, the daughter of jailed human rights leader Abdulhadi Alkhawaja, who is now on the 54th day of his hunger strike. Doctors say her father could go into a coma at any point, and she has called on President Obama to pressure the government Bahrain, its strategic ally in the region, to secure his release. END_OF_DOCUMENT_TOKEN_TO_BE_REPLACED

END_OF_DOCUMENT_TOKEN_TO_BE_REPLACED

The persistence of pro-democracy protests in Bahrain in the face of brutal repression may be giving Washington second thoughts about its unwavering support for the royal rulers of the strategically important Persian Gulf kingdom. Are we about to witness a cosmetic ‘regime change’ – not so much for the genuine sake of democratic rights in Bahrain, but more to save Washington’s vital interests across the region?The tiny island situated between Saudi Arabia and Qatar serves as the base for the US Navy’s Fifth Fleet. The Fifth Fleet, comprising 16,000 personnel and 30 vessels, is a staging ground for US military projection across the Middle East and Central Asia. It also monitors the sealanes of the Persian Gulf through which some 30 per cent of the world’s total supply of traded oil passes every day.

END_OF_DOCUMENT_TOKEN_TO_BE_REPLACED 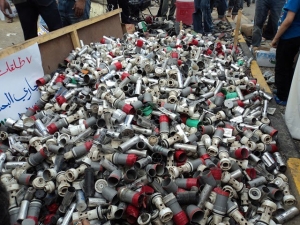 After more than five months of popular opposition to its autocratic rule, the US and British-backed unelected monarchy in Bahrain is deploying a new tactic of repression – toxic terror.

Unable to thwart widespread calls for democratic freedom, the Western-backed Bahraini dictatorship is targeting vulnerable civilians – the young, elderly and infirmed – in a bid to crush the pro-democracy movement.

END_OF_DOCUMENT_TOKEN_TO_BE_REPLACED

This third interview with Finian Cunningham, an Irish journalist now living in Manama, Bahrain, is probably the most telling yet. The arrest of 47 medical personnel and the subsequent torture after their arrest for crimes against the government in Bahrain belies this notion expressed to President Barack Obama that “everything is returning to normal” in Bahrain. With the presence of the US 5th Fleet in that country, our government surely knows that the massive reprisals by the monarchy in Bahrain are still continuing, right up to the present day.