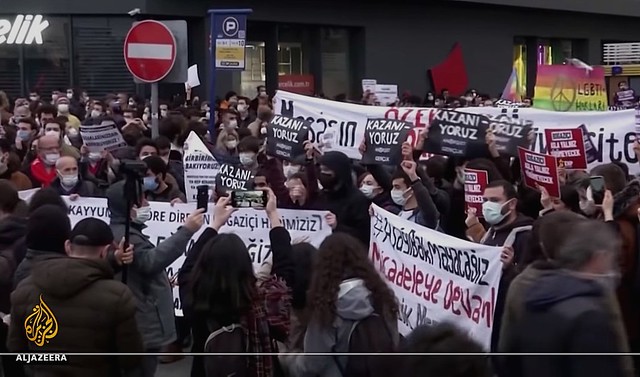 END_OF_DOCUMENT_TOKEN_TO_BE_REPLACED

It began innocently enough, it seemed, when a plan to turn Istanbul’s Gezi Park – located at Taksim Square – into a shopping mall spurred a small group of environmental activists to occupy the park in protest in late May of 2013. Within a week, a wave of urban uprisings had spread across the country, involving hundreds of thousands of protesters, in dozens of cities, met with massive state repression and violence, resulting in a few deaths and thousands of injuries and arrests. The world is now watching Turkey – the connecting landmass between Europe and Asia – once home to the Ottoman Empire, and now home to a profound lesson for the world’s people in a struggle for democracy against inequality, oligarchy, oppression and tyranny.

END_OF_DOCUMENT_TOKEN_TO_BE_REPLACED

Turkey’s Prime Minister Recep Tayyip Erdogan lives in a world of foreign intrigue and mischief making. Now his penchant for dark forces seems to be rebounding on his government – with a vengeance.

Erdogan and his ruling Justice and Development Party (AKP), accused of increasingly authoritarian tendency, are being challenged by nearly a week of widespread public protests across Turkey, which has even unnerved Washington and sent tourists and foreign investors fleeing.

END_OF_DOCUMENT_TOKEN_TO_BE_REPLACED

On May Day 2013, the police poured tonnes of tear gas on tens of thousands of workers and youth in different quarters of Istanbul, Turkey in order to stop them from approaching Taksim Square. The government had decided that this square, the traditional venue for May Day celebrations and home to daily political actions big and small, was to be shut to demonstrations this year because development work was being done on a massive scale involving huge excavated pits making it dangerous for crowds. In a ludicrous act, the governor of Istanbul stood atop a mound at the edge of one of those pits to hold a press conference in a desperate attempt to drive home the threat that these pits represented for people.

END_OF_DOCUMENT_TOKEN_TO_BE_REPLACED

More than 24 hours after it reached its final destination in Damascus, Turkey has yet to provide substantial justification for why it forced a civilian airliner to dramatically land in Ankara under coercion of F16 fighter jets.

The Airbus A320 with 37 people onboard was on a routine flight from Moscow to Damascus. Among the passengers were women and children, yet the aircraft was forced to land for nine hours and undergo a security shakedown. Reports say that Turkish security officers handcuffed the crew and pointed guns while the plane’s cargo was searched and a portion confiscated.

END_OF_DOCUMENT_TOKEN_TO_BE_REPLACED

For the second consecutive day Turkish military forces bombarded Syria’s border region with artillery. Several Syrian soldiers are reported dead from the assault in the Tel Abyad district. Civilians have also suffered injuries, according to unconfirmed video footage, despite Turkish claims that its forces are using military “rules of engagement” and radar to select targets.

END_OF_DOCUMENT_TOKEN_TO_BE_REPLACED

On April 11 Prime Minister Recep Tayyip Erdoğan told reporters accompanying him to China that Turkey is considering asking the 28-nation North Atlantic Treaty Organization to invoke its Article 5 collective military assistance clause against Syria after a reported brief cross-border skirmish between Syrian military forces and what were identified as refugees, whether armed or otherwise remains unclear. Turkey unabashedly provides refuge for and, though not publicly acknowledged, assistance to thousands of Free Syrian Army fighters in its south.