END_OF_DOCUMENT_TOKEN_TO_BE_REPLACED

WikiLeaks releases today the “Investment Chapter” from the secret negotiations of the TPP (Trans-Pacific Partnership) agreement. The document adds to the previous WikiLeaks publications of the chapters for Intellectual Property Rights (November 2013) and the Environment (January 2014).

END_OF_DOCUMENT_TOKEN_TO_BE_REPLACED 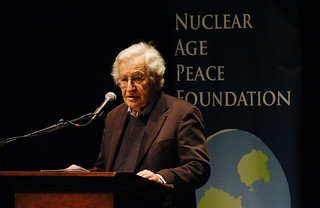 Social critic and peace activist Noam Chomsky is the most cited public intellectual of today.

His works in linguistics, philosophy and cognitive science have earned him the title the “father of modern linguistics”. His critical publications on mass media, politics and globalization have put him on the forefront of civil activism starting as anti-war activist in the 1960s and now as supporter of the Occupy movement.

END_OF_DOCUMENT_TOKEN_TO_BE_REPLACED

President Barack Obama has been a major disappointment to a liberal community that rallied to his call for genuine change. His administration has made no attempt to investigate the crimes that were committed by the Bush administration, including torture and abuse, secret prisons and renditions. President Obama rescued Wall Street, but not Main Street. And he has expanded the self-destructive war in Afghanistan, where there is no end in sight. President Obama cannot be blamed for the failure to close Guantanamo, but he continues to favor preventive detention. But the president’s most inexplicable failure, in view of his Harvard Law School background and commitment to constitutional rights, is his unwillingness to name a statutory inspector general (IG) at the Central Intelligence Agency (CIA).

END_OF_DOCUMENT_TOKEN_TO_BE_REPLACED

The new military space plane, called the X-37B, was launched yesterday from Cape Canaveral strapped to an Atlas V rocket. The X-37 will spend up to 270 days in space before landing at Vandenberg AFB in California. The space plane will mostly fly on “autopilot” since there is no human inside the craft.