Talk by Vandana Shiva, author of “Biopiracy: The Plunder of Nature and Knowledge” speaking August 2, 2013 at the “Justice Begins With Seeds 2013 International Conference” at Seattle First Presbyterian Church in Seattle, WA.  END_OF_DOCUMENT_TOKEN_TO_BE_REPLACED 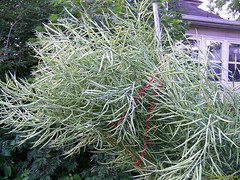 Regular readers will know we are doing what we can to support Vandana Shiva’s “Occupy the Seed” campaign, running between 2 — 16 October, 2012. This worthy “Seed Freedom Fortnight of Action” is a call to respect and liberate the world’s seeds and to maximise their diversity — their being the very basis of our existence, and an absolute wonder of biological ‘magic’ in their own right. […]

END_OF_DOCUMENT_TOKEN_TO_BE_REPLACED

On December 4, 2011, farmers and activists from across the country joined the Occupy Wall Street Farmers March for “a celebration of community power to regain control over the most basic element to human well-being: food.” Maine organic farmer Jim Gerritsen spoke to a crowd of more than 500 farmers, food workers and sustainable food and agriculture activists about his role in the Public Patent Foundation lawsuit against biotech seed and chemical giant Monsanto. Gerritsen made his first trip to New York City to share his concern about the loss of organic seeds to genetic contamination and the threat this poses to farmers and our food supply.