“The society that loses its grip on the past is in danger, for it produces men who know nothing but the present, and who are not aware that life had been, and could be, different from what it is.” — Aristotle, Politics

The title is an unapologetic P.T. Barnum hook. The three reasons? Why not a sacred ten? Or 350 million? Doesn’t everyone have his or her own take on Twitter? Isn’t reason what is behind our opinions, or my “whatever” about your reasons? END_OF_DOCUMENT_TOKEN_TO_BE_REPLACED

The Congress, that polls show the American people would like to replace in its entirety, has “kicked the can down the road” again, putting off the government shutdown until January 15th and another debt ceiling showdown until February 7th.

The polls also show, convincingly, that people blame the stubborn Republicans more than the Democrats for the adverse effects of the impasse on workers, public health, safety, consumer spending, recreational parks and government corporate contracts.

END_OF_DOCUMENT_TOKEN_TO_BE_REPLACED

An interview with Noam Chomsky

The social movement of the day camps at public spaces and calls itself Occupy. You’ve called it the first major popular response to 30 years of class war in the United States. What do you think has Occupy achieved so far?

It achieved a lot, in two aspects. It very significantly affected public sensibility and public discourse. The imagery of the one percent versus the 99 percent, that’s spread over right through the mainstream, that’s now standard discourse. And that’s not insignificant. It brings to public attention the massive inequality and the striking maldistribution of power. END_OF_DOCUMENT_TOKEN_TO_BE_REPLACED 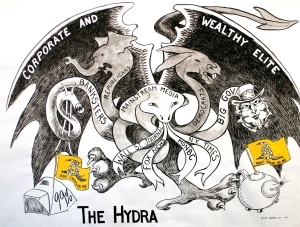 Unification of the Tea Party and Occupy movements for a common goal – a Voters’ Rights Amendment – will reestablish the United States as a democratic republic and will restore control of its government to the voters.

END_OF_DOCUMENT_TOKEN_TO_BE_REPLACED

Beginning with Occupy Wall Street in September 2011, a protest movement spread across the United States to 70 major cities and hundreds of other communities. Similar actions emerged in scores of other nations.

For the first two weeks, the corporate-owned mainstream media along with NPR did what they usually do with progressive protests: they ignored them. These were the same media that had given the Tea Party supporters saturation coverage for weeks on end, ordaining them “a major political force.”

END_OF_DOCUMENT_TOKEN_TO_BE_REPLACED

“You wouldn’t be able to get your message out there without us.” — Griff Jenkins, Fox News producer

“If you put every single left-wing cause into a blender, this is the sludge you’d get.” — Sean Hannity Show, Fox

“Here we don’t think of prohibition. Because the ruling system has even suppressed our capacity to dream. Look at the movies that we see all the time. It’s easy to imagine the end of the world. An asteroid destroying all life and so on. But you cannot imagine the end of capitalism.” — Slavoj Zizek, address October 9, 2011 to Occupy Wall Street protesters

END_OF_DOCUMENT_TOKEN_TO_BE_REPLACED

While I fully endorse the efforts and actions of the Occupy Wall Street protests, now emerging internationally, there are concerns which need to be addressed and kept in mind as the movement moves forward.

The process through which a potentially powerful movement may be co-opted and controlled is slight and subtle. If Occupy Wall Street hopes to strive for the 99%, it must not submit to the 1%, in any capacity.

END_OF_DOCUMENT_TOKEN_TO_BE_REPLACED

There’s always soma to calm your anger, to reconcile you to your enemies, to make you patient and long-suffering. — Aldous Huxley, “Brave New World”

Until and unless you discover that money is the root of all good, you ask for your own destruction. When money ceases to become the means by which men deal with one another, then men become the tools of other men. Blood, whips and guns – or dollars. Take your choice – there is no other. — Ayn Rand, “Atlas Shrugged “

By the Democrats, the Game Has Been Played Like This Since the ’60s

END_OF_DOCUMENT_TOKEN_TO_BE_REPLACED

Only in Congress, with its rules for minority rule, can a minority of the Republican Party in the House of Representatives impose its havoc on the American people there, then on the Senate side and on Obama

END_OF_DOCUMENT_TOKEN_TO_BE_REPLACED

History never repeats itself exactly.  But it makes some pretty decent copies.  As I write this on March 29, 2011, we are winding down to the end of the so-called “debt-limit crisis,” or the possible end, or the continuation of it, or what have you.  Of course what is going on is not really about the debt-limit.  It is about the future of the federal government in the United States and its appropriate role.  As I wrote in my BuzzFlash@Truthout Commentary on Grover Norquist’s wet dream his 25-year campaign is focused only at the secondary level on taxation.  It is primarily about his stated goal of “shrinking the federal government to the size of a bathtub and then drowning it in the bathtub,” or as he used to more simply state it: “starve the beast.”

END_OF_DOCUMENT_TOKEN_TO_BE_REPLACED

The GOP faces a major dilemma in the upcoming presidential election. Before I get into that, let’s define what I mean by “The GOP.” First, I don’t mean most of their public figures. Their elected officials for the most part are bought and paid for employees by those who run the Party. They have neither an independent voice nor independent power (as much as certain Tea Party GOP front men and women may think they do, this is not the case). END_OF_DOCUMENT_TOKEN_TO_BE_REPLACED