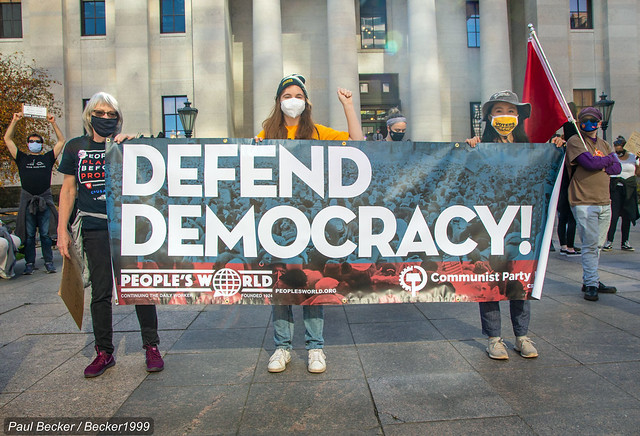 Constitutional rights lawyer talks to Abby Martin about the potential for the Supreme Court to overturn the election results in Trump’s favor, and analyzes the basis of voter fraud allegations.

END_OF_DOCUMENT_TOKEN_TO_BE_REPLACED

John Yoo, the man who provided the legal rationalizations for many of our numerous and multifaceted war crimes in Afghanistan and Iraq during the Bush II administration came to speak in Austin last week at the University of Texas law school.  I skated out from work a little early and went to see him speak.

Got there good and early to get a seat, and waited outside the auditorium while the Federalist Society types ran around trying to tie up all the loose ends.  Clearly they weren’t my type of people–all the men were wearing identical black suit white shirt red tie outfits and looked, and acted, like a hybrid of John Belushi’s two nemeses in Animal House, Neidemeyer the preppy ROTC turd, and Marmelard, the smarmy student government sellout.  Except that all the Federalist types were all short, with short-man personalities.  Their Federalist Society women had a little more flexibility in their apparel, and all dressed well and looked physically attractive but all seemed wound rather too tight.  Seeing them reminded me of a friend of mine’s remark about Sarah Palin–he’d thought she might be worth some naked time with but somehow he suspected she’d be a lousy piece of ass.  They were both officious and incompetent–the line to the auditorium didn’t get sorted out until I stepped up and started it and gave some clear directions to the crowd milling outside there.