On the show this week, Chris Hedges discusses cancel culture with Dan Kovalik, author and Associate Professor of Law at the University of Pittsburgh.

END_OF_DOCUMENT_TOKEN_TO_BE_REPLACED

The ruling class of the U.S./NATO empire justifies the heinous actions of its military forces, the brutality of its internal police states, and the cruelty towards the poor of its neoliberal economic deprivation by claiming that everything it does is necessary to combat some grand evil. Whether this evil is Islam, or communism, or the very presence of opposition to Washington’s war narratives, the threat is portrayed as being so all-encompassing and enormous that it should solely occupy our political concerns.

END_OF_DOCUMENT_TOKEN_TO_BE_REPLACED

Twitter, Facebook and other social media companies have removed President Trump from their platforms, after years of debate about the disinformation he shared to millions of followers from his accounts.

END_OF_DOCUMENT_TOKEN_TO_BE_REPLACED 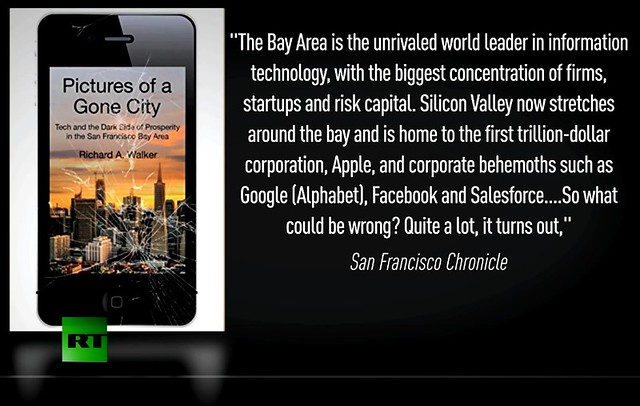 Richard Walker, Professor Emeritus of Geography at the University of California, Berkeley, discusses his new book, Pictures of a Gone City: Tech and the Dark Side of Prosperity in the San Francisco Bay Area with journalist Chris Hedges. The book reveals Silicon Valley’s tech giant elitism, its role as a symbol of new capitalism, and the dark world of underpaid workers who lack security and rising homelessness.

END_OF_DOCUMENT_TOKEN_TO_BE_REPLACED

As Facebook and Twitter are purging alternative media outlets, a neoconservative operative at a US government-funded think tank says more censorship is on its way. Max Blumenthal and Jeb Sprague discuss how scaremongering over Russia and China is being exploited to silence dissent on social media.

END_OF_DOCUMENT_TOKEN_TO_BE_REPLACED

Facebook is erasing popular alternative media pages that had millions of likes and suspending anti-war and anti-police brutality accounts, in coordination with Twitter. Journalist Max Blumenthal says this is part of a larger political crackdown; EFF’s David Greene says the implications are dangerous.

END_OF_DOCUMENT_TOKEN_TO_BE_REPLACED

In 2009, the US Agency for International Development, USAID, created a Twitter-like social network called ZunZuneo in order to fuel dissent in Cuba. According to the Associated Press, the service was intended to let users not only discuss topics such as sports and music, but also organize protests, voice dissent, and avoid censorship in the island nation. Topping out at around 40,000 users that the US gathered demographic and other information on, the program was ended after a government grant expired in September 2012. RT’s Ameera David dives into the details of this newly revealed USAID program.

END_OF_DOCUMENT_TOKEN_TO_BE_REPLACED

Despite the best efforts of Hosni Mubarak’s government, images of millions of Egyptians protesting on the streets of Cairo, Alexandra and Suez have been beamed around the world. But while the clashes between anti- and pro-Mubarak protestors dominated the airwaves, the journalists covering the fighting became targets themselves. Many were harassed, arrested and beaten while others had their equipment confiscated, but they continued to cover the story.

The government pulled the plug on the country’s internet connection, cut the phone lines for a time, poured propaganda out on state-controlled media but the momentum of the demonstrators was unstoppable. We trail the coverage of one of the biggest political protests in Arab history, one that came together online, dominated the headlines and sent tremors all the way from Sanaa to Washington.