photo by Hakim
used with permission
© All rights reserved

Love or Enmity in Afghanistan? Are Pushtoons, Tajiks, Hazaras, Uzbeks and other ethnic groups in Afghanistan doomed by geopolitics to hate one another? Is non-violence an ‘obsolete’ concept for Afghans? Can economic self-reliance be built out of a globally dominant capitalism? Is genuine love possible in Afghanistan? Can the Afghan Peace Volunteers find peace in Afghanistan?

END_OF_DOCUMENT_TOKEN_TO_BE_REPLACED

There’s always soma to calm your anger, to reconcile you to your enemies, to make you patient and long-suffering. — Aldous Huxley, “Brave New World”

Until and unless you discover that money is the root of all good, you ask for your own destruction. When money ceases to become the means by which men deal with one another, then men become the tools of other men. Blood, whips and guns – or dollars. Take your choice – there is no other. — Ayn Rand, “Atlas Shrugged “

By the Democrats, the Game Has Been Played Like This Since the ’60s

END_OF_DOCUMENT_TOKEN_TO_BE_REPLACED 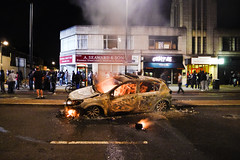 “At 9.22 the Brixton shopping centre appeared almost calm by comparison to Railton Road. Rubbish was strewn across the main A23 Brixton Road; burglar alarms rang vainly from looted shops; and knots of youths, black and white, drifted along in the almost complete absence of police.” — ‘Eyewitness: Looters moved in as the flames spread’

END_OF_DOCUMENT_TOKEN_TO_BE_REPLACED

An event at Andover High School sponsored by the Andover Education Association to promote student, teacher, and community civic action.

END_OF_DOCUMENT_TOKEN_TO_BE_REPLACED

“European students live in societies where it becomes more difficult to collapse public life into largely private considerations. Students in these countries have access to a wider range of critical public spheres;
politics in many of these countries has not collapsed entirely into the spectacle of celebrity/commodity culture; left-oriented political parties still exist; and labor unions have more political and ideological clout than they do in the United States.”  — Henry A. Giroux, Left Behind? American Youth and the Global Fight for Democracy Truthout (www.truth-out.org)

END_OF_DOCUMENT_TOKEN_TO_BE_REPLACED

“The command of Egypt’s military stepped forward Thursday in an attempt to stop a three-week-old uprising, declaring on state television it would take measures “to maintain the homeland and the achievements and the aspirations of the great people of Egypt” and meet the demands of the protesters. The development appeared to herald the end of President Hosni Mubarak’s 30-year rule.” — The New York Times, 10 February, 2011

END_OF_DOCUMENT_TOKEN_TO_BE_REPLACED

In one of the most striking political comebacks in U.S. history, the Republican Party marched in lockstep to victory in the midterm elections and seized control of the House of Representatives and state houses across the nation. Republicans made a battle plan, they disciplined their troops, and the corporations paid for the ammunition.

Unless the Democrats do something drastically differently during the next two years, the rich and powerful will cement their victory around the body of democracy and dump the barrel of freedom into the deep dark waters of cash politics where it will be lost forever.