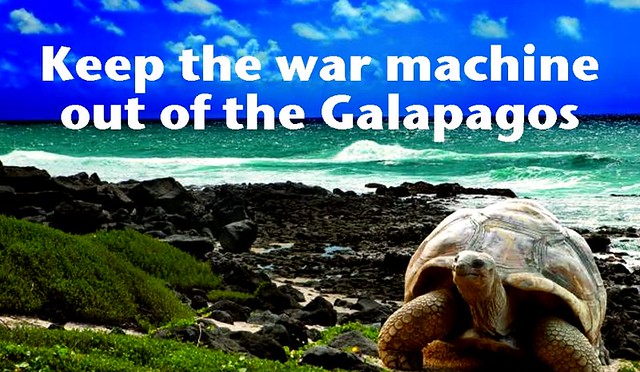 The government of Ecuador has recently agreed to allow the U.S. military to base aircraft and naval ships at one of the Galapagos Islands in violation of the Constitution of Ecuador, which both forbids any foreign military installations and provides the natural environment with the right to be protected.

The Galapagos Islands are home to a large number of endemic species and are the source of Charles Darwin’s studies and observations which led to the Darwin theory of evolution. The islands and surrounding waters are a natural environment treasure and have been designated as a UNESCO World Heritage Site and a biosphere reserve.

The United States currently has over 1,000 military bases around the world which are a source of major environmental destruction. Recently the U.S. Navy destroyed pristine coral reefs in Jeju Island, South Korea and local residents in Okinawa are desperately trying to stop the construction of a new base in Henoko.

It would be a travesty to allow a major producer of pollution and environmental destruction to be based on an irreplaceable site precious to the world.

A petition to the government of Ecuador from the people of the world:

We demand that the government of Ecuador keep the U.S. military out of the Galapagos Islands.

Ecuador has granted the United States permission to use one of its famed Galapagos islands as an airfield. But the government in Quito is facing a backlash for what critics are calling a violation of the country’s constitution, which doesn’t allow foreign military bases on its soil.

U.S. Surveillance Planes Will Operate From The Galapagos

U.S. surveillance planes will operate from the Galapagos as the United States are funding an extension of the San Cristobal Island airport in the Ecuadorean archipelago.

See also: Ecuadoreans Protest US Military’s Use of Galapagos Airport

Chris Hedges and Kristinn Hrafnsson: The US Extradition Request for Julian Assange