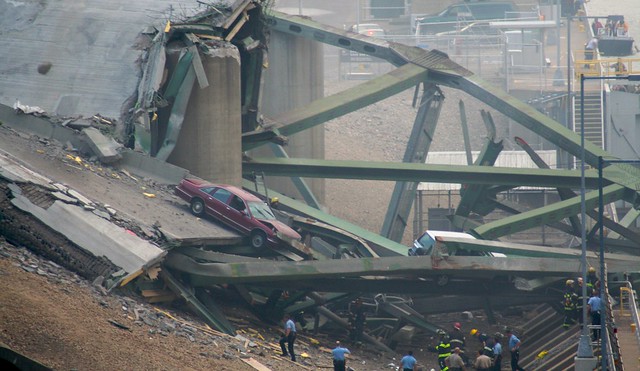 In a landmark infrastructure bill passed in December, Congress finally penetrated the Fed’s “independence” by tapping its reserves and bank dividends for infrastructure funding.

The bill was a start. But some experts, including Congressional candidate Tim Canova, say Congress should go further and authorize funds to be issued for infrastructure directly.

For at least a decade, think tanks, commissions and other stakeholders have fought to get Congress to address the staggering backlog of maintenance, upkeep and improvements required to bring the nation’s infrastructure into the 21st century. Countries with less in the way of assets have overtaken the US in innovation and efficiency, while our dysfunctional Congress has battled endlessly over the fiscal cliff, tax reform, entitlement reform, and deficit reduction.

Both houses and both political parties agree that something must be done, but they have been unable to agree on where to find the funds. Republicans aren’t willing to raise taxes on the rich, and Democrats aren’t willing to cut social services for the poor.

In December 2015, however, a compromise was finally reached. On December 4, the last day the Department of Transportation was authorized to cut checks for highway and transit projects, President Obama signed a 1,300-page $305-billion transportation infrastructure bill that renewed existing highway and transit programs. According to America’s civil engineers, the sum was not nearly enough for all the work that needs to be done. But the bill was nevertheless considered a landmark achievement, because Congress has not been able to agree on how to fund a long-term highway and transit bill since 2005.

That was one of its landmark achievements. Less publicized was where Congress would get the money: largely from the Federal Reserve and Wall Street megabanks. The deal was summarized in a December 1st Bloomberg article titled “Highway Bill Compromise Would Take Money from US Banks”:

The highway measure would be financed in part by a one-time use of Federal Reserve surplus funds and by a reduction in the 6 percent dividend that national banks receive from the Fed… . Banks with $10 billion or less in assets would be exempt from the cut.

The Fed’s surplus capital comes from the 12 reserve banks. The highway bill would allow for a one-time draw of $19 billion from the surplus, which totaled $29.3 billion as of Nov. 25… .

Banks vigorously fought the dividend cut, which was estimated to generate about $17 billion over 10 years for the highway trust fund.

According to Zachary Warmbrodt, writing in Politico in November, the Fed registered “strong concerns about using the resources of the Federal Reserve to finance fiscal spending.” But former Federal Reserve Chairman Ben Bernanke, who is now at the Brookings Institute, acknowledged in a blog post that the Fed could operate with little or no capital. His objection was that it is “not good optics or good precedent” to raid an independent central bank. It doesn’t look good.

Rep. Peter DeFazio (D-Oregon), ranking member on the House Transportation Committee, retorted, “For the Federal Reserve to be saying this impinges upon their integrity, etc., etc. — you know, it’s absurd. This is a body that creates money out of nothing.”

DeFazio also said, “[I]f the Fed can bail out the banks and give them preferred interest rates, they can do something for the greater economy and for average Americans. So it was their time to help out a little bit.”

An Idea Whose Time Has Come

It may be their time indeed. For over a century, populists and money reformers have petitioned Congress to solve its funding problems by exercising the sovereign power of government to issue money directly, through either the Federal Reserve or the Treasury.

In the 1860s, Abraham Lincoln issued debt-free US Notes or “greenbacks” to finance much of the Civil War, as well as the transcontinental railroad and the land-grant college system. In the 1890s, populists attempted unsuccessfully to revive this form of infrastructure funding. In the Great Depression, Congress authorized the issuance of several billion dollars of US Notes in the Thomas Amendment to the 1933 Agricultural Adjustment Act. In 1999, Illinois Rep. Ray LaHood introduced the State and Local Government Economic Empowerment Act (H. R. 1452), which would have authorized the US Treasury to issue interest-free loans of US Notes to state and local governments for infrastructure investment.

Law professor Timothy Canova plans to reintroduce this funding model if elected to represent Florida’s 23rd Congressional district, where he is now running against the controversial Debbie Wasserman Schultz, current chair of the Democratic National Convention. Prof. Canova wrote in a December 2012 article:

… Wall Street bankers and mainstream economists will argue that greenbacks and other such proposals would be inflationary, depreciate the dollar, tank the bond market, and bring an end to Western civilization. Yet, we’ve seen four years of the Federal Reserve—now on its third quantitative-easing program—experimenting with its own type of greenback program, creating new money out of thin air in the form of credits in Federal Reserve Notes to purchase trillions of dollars of bonds from big banks and hedge funds. While the value of the dollar has not collapsed and the bond market remains strong, neither have those newly created trillions trickled down to Main Street and the struggling middle classes. The most significant effect of the Fed’s programs has been to prop up banks, bond prices, and the stock market, with hardly any benefit to Main Street.

In a January 2015 op-ed in the UK Guardian titled “European Central Bank’s QE Is a Missed Opportunity,” Tony Pugh concurred, stating of the US and European QE programs:

Quantitative easing, as practised by the Bank of England and the US Federal Reserve, merely flooded the financial sector with money to the benefit of bondholders. This did not create a so-called wealth affect, with a trickle-down to the real producing economy.

… If the EU were bold enough, it could fund infrastructure or renewables projects directly through the electronic creation of money, without having to borrow. Our government has that authority, but lacks the political will. The [Confederation of British Industry] has calculated that every £1 of such expenditure would increase GDP by £2.80 through the money multiplier. The Bank of England’s QE programme of £375bn was a wasted opportunity.

According to IMF director Christine Lagarde, writing in The Economist in November 2015:

IMF research shows that, in advanced economies, an increase in investment spending worth one percentage point of GDP raises the overall level of output by about 0.4% in the same year and by 1.5% four years after the spending increase.

In a December 2015 paper titled “Recovery in the Eurozone: Using Money Creation to Stimulate the Real Economy”, Frank van Lerven expanded on this research, writing:

For the Eurozone, statistical analysis of income and consumption patterns suggests that €100 billion of newly created money distributed to citizens would lead to an increase in GDP of around €232 billion. Using IMF fiscal multipliers, our empirical analysis further suggests that using the money to fund a €100 billion increase in public investment would reduce unemployment by approximately one million, and could be between 2.5 to 12 times more effective at stimulating GDP than current QE.

The invariable objection to exercising the government’s sovereign money-creating power is that it would lead to hyperinflation, but these figures belie that assumption. If adding €100 billion for infrastructure increases GDP by €232 billion, prices should actually go down rather than up, since the supply of goods and services (GDP) would have increased more than twice as fast as demand (money). Conventional theory says that prices go up when too much money is chasing too few goods, and in this case the reverse would be true.

In a November 2015 editorial, the Washington Post admonished Congress for blurring the line between fiscal and monetary policy, warning, “Many a banana republic … has come to grief using its central bank to facilitate government deficit spending.” But according to Prof. Michael Hudson, who has studied hyperinflations extensively, that is not why banana republics have gotten into trouble for “printing money.” He observes:

Any encroachment on the Fed’s turf is viewed by Wall Street and the mainstream media with alarm. But to people struggling with mounting bills and crumbling infrastructure, the development has promising potential. The portal to the central bank’s stream of riches has been forced open, if just a crack. The trickle could one day become a flow, a mighty river of liquidity powering the engines of productivity of a vibrant economy.

For that to happen, however, we need an enlightened citizenry and congressional leaders willing to take up the charge; and that is what makes Prof. Tim Canova’s run for Congress an exciting development.

After 100 Years, It’s Time to Make the Federal Reserve a Public Utility by Ellen Brown

5 thoughts on “The Citadel Is Breached by Ellen Brown”