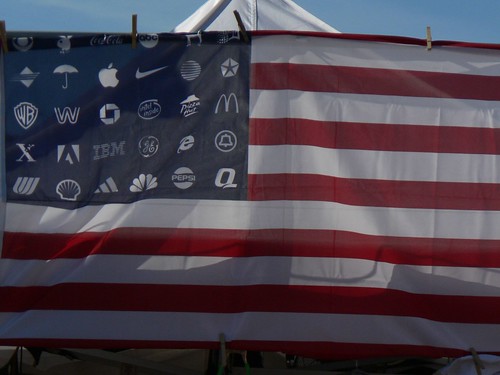 Corporatized and commercialized elections reach a point where they stand outside and erode our democracy. Every four years the presidential and Congressional elections become more of a marketplace where the wealthy paymasters turn a civic process into a spectacle of vacuous rhetorical contests, distraction and stupefaction.

The civic minds of the people are sidelined by the monetized minds of a corrupted commercial media, political consultants, pundits and the purveyors of an ever-more dictatorial corporate state.

The dominance of influence money by the plutocracy and now big business PACs, such as that of the super-rich Koch brothers is just the beginning. The monetized minds don’t just rely on their “quid pro quo” checkbooks. They foster gerrymandering electoral districts so that politicians indentured to them pick the voters instead of a legitimate congressional district’s voters picking a candidate. And the debates now are more ratings inventory for Big Media than a discussion of major issues which remain off the table.

Presidential debates are controlled by a Commission on Presidential Debates (CPD) – a private corporation – created by the Republican and Democratic parties and funded by beer, auto, telephone and other corporations whose patronage includes lavish hospitality suites. Thus, through the cover of CPD, the two big parties control the number of debates, who is invited to participate and which reporters ask the questions before an approved audience.

This year, the monetized minds went further. Now a commercial cable or network television company decides the formats and who is in tier one, tier two or not included at all. The Big Media sponsors(Fox, CNN, NBC and others) decided that Mark Everson, who dropped out in November, was the first candidate to go to all of Iowa’s 99 counties, and he was excluded from the competition because he does not have a PAC sponsor and hasn’t raised enough money. Yet he is the only Republican presidential candidate with executive experience. Under George W. Bush, he was head of the IRS and Deputy Commissioner of the Immigration and Naturalization Service.

Monetizing elections has predictable consequences. The ditto-head reporters, obsessed with tactics and gaffes, never ask about corporate crime, corporate welfare, the American Empire with its un-auditable Defense Department, the over $300 billion a year in computerized billing fraud in the health care industry, or why corporations are given free exploitation of our public property – such as gold and silver mines on public land , the public airwaves and the trillions of dollars of federal research given away to big business in such industries as the drug, aerospace, computer, biotech and information companies.

Commercializing elections leads to an astonishing similarity among reporters traveling with candidates or those asking questions during so-called debates.

For example, Donald Trump always brags about his business prowess as an asset for his presidential run to “make America great again” but is not pressed by reporters to voluntarily release his thousands of pages of annual tax returns to see whether his boasts are justified.

The pretentious Marco Rubio, fresh from the Florida legislature and now an absentee U.S.  Senator still getting his pay, repeatedly flaunts his difficult previous experience with student loans and living paycheck to paycheck. No reporter asks why then he is opposed to raising the inflation-gutted minimum wage and has no proposal to deal with the massive yoke of $1.3 trillion in student loans, with very high interest rates.

The brazen PAC-created Senator Ted Cruz now tells his audiences that the time for rhetoric is over, and that the focus should be on a candidate’s record. Meanwhile, he gets away without having to explain one of the zaniest, hateful, corporatist, empty presences in the U.S. Senate.

The monetized minds running our elections also make sure that our civic culture and its many intelligent civic advocacy groups are sidelined when it comes to informing both the voters about important issues. This is just about the most amazing exclusion of them all. Non-partisan civic leaders and specialists, people who know the most about energy, the environment, the health industry, about militarism abroad and public budget abuses at home, about taxation and electoral reforms, about law enforcement regarding corporate crime and the prison industrial complex are rarely given voice by the media, including PBS and NPR.

Look at the Sunday morning network news shows. Pundits and politicians fill the stages. The real experts don’t get interviewed; they have trouble getting into the op-ed pages of the print media and are rarely drawn on by the candidates who are too busy dialing for commercial dollars that conflict with seeking out those who work with facts, for truth and justice.

Consequently, shorn of any participating civic culture, the political culture is ready for hijacking by the commercial interests and the corporate state.

The politicians ride merrily on a torrent of words and opinions without having to explain their record, so often different or at odds with what they are bloviating. Hillary Clinton gets away with her illegal war on Libya (against the advice of Secretary of Defense Robert Gates) and the resultant chaotic bloodshed spilling over into other African countries.

None of the candidates are asked whom they would consider as their White House advisors and cabinet secretaries. This information would give voters an idea of the likelihood of broken promises.

In 2008 Barack Obama campaigned repeatedly for “hope and change.” Then after his election, he gathered for a surprise photo opportunity with Clinton retreads like the bailout, self-enrichment banker, Robert Rubin, and others known for anything but “hope and change.”

Voters, you can change all this rancid defilement of our Republic and its democratic dreams. Do your homework on the parties and the candidates, form informal groups to demand debates and agendas that you preside over, push for more choices on the ballot, make votes count over money. The internet can help speed up such efforts.

You outnumber the politicos and their entourages everywhere.  You are the ones who keep paying the price for letting politics remain a deadly form of distracting entertainment with a mainstream media obsessed with the horse race rather than the human race.