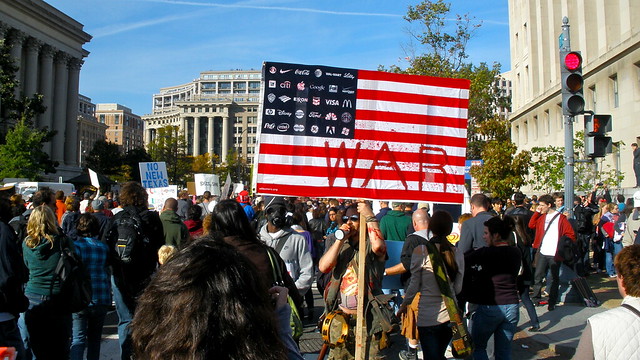 Writer and activist David Swanson discusses his new book Curing Exceptionalism, with TRNN’s Ben Norton, exploring how American nationalism and the myth of US superiority is used to justify hyper-militarism and capitalist oppression.

Suzy Hansen’s book Notes on a Foreign Country is the diary of someone going through the process of gaining the world by losing their religion, the religion of U.S. Exceptionalism. She begins as an ordinary U.S. resident, not believing anything that you would find unusual, but assuming all the certifiably insane things you assume are not even questionable:

Hansen’s book, focused on her experience living in Istanbul, is a powerful case for living abroad and for reshaping U.S. education and culture to include time abroad, exchanges and visits, and the provision within the United States of basic information about what the world outside consists of. Hansen recounts her transition to humanism, or whatever you’d like to call the absence of Exceptionalism, much as a whistleblower would describe losing their loyalty as a government employee. But she’s not a government employee, rather a member of a society — something you don’t exactly lose so much as outgrow.

Hansen, by her own account, arrives in Turkey shocked to see a nicer airport than the U.S. one she departed from, shocked to see a standard of living (for some) as high or higher than in the United States, reluctant to believe the extent of U.S. influence on Turkey that people describe to her, and ignorant of the impact of the past on the present. “Americans are surprised,” she writes, “by the direct relationship between their country and foreign ones because we don’t acknowledge that America is an empire; it is impossible to understand a relationship if you are not aware you are in one.”

Hansen finds, as she might have found in any number of countries, that in Turkey at least many people are quite aware of past U.S.-supported coup governments, U.S. construction projects, U.S. sabotage of the labor movement, U.S. influence through propaganda/entertainment, U.S. military bases in Turkey, U.S. wars nearby — in short the impossibility that Turkey would be what it is now, for better and worse, without the heavy hand of the United States. Meanwhile over here in Virginia when I complain that, like most Democratic and many Republican Party candidates for Congress, the latest Democratic nominee in my district steadfastly refuses to mention the existence of the world or to take any opinion whatsoever on the 60% of the discretionary budget that goes to militarism, I get responses from earnest neighbors who tell me that House members have no role in foreign policy — as if Article I, Section 8, the committees on foreign relations and armed so-called services, the votes to destroy Afghanistan and Iraq, and so much else is all just in my imagination. If I were to conduct a survey on people’s views on Turkey, very few would have any views at all, and many would not be able to locate it on a globe.

That the leader of a major political movement in Turkey lives in Pennsylvania would surprise many people in the United States if they could manage to take an interest in it long enough to be surprised. And if the fact elicited any opinion it would undoubtedly be: Well that must be good for Turkey to learn from Pennsylvania. This opinion would come from people with almost certainly in most cases no thought of or knowledge of Pennsylvania’s history as a colony that thrived by rejecting war and genocide in stark contrast to its northern and southern neighbors. Rather, Pennsylvania, like any state, would mean essentially the U.S.A.

As Hansen comes to understand the importance and the destructiveness of, for example, U.S. economic influence on Turkey, Greece, Egypt, and elsewhere, she finds herself having to become aware of and outgrow the idea that any changes in the direction of resembling the United States are changes for the good. She gets to this point by respecting non-Americans as human beings and learning their history. And once she gets to this point, she comes to an understanding of what else her belief system involves:

“American exceptionalism did not only define the United States as a special nation among lesser nations, it demanded that all Americans believe they, too, were born superior to others, a concept of goodness that requires the existence of evil for its own sustenance. How could I, as an American, understand a foreign people when unconsciously I did not extend the most basic faith to other people that I extended to myself? This was a limitation that was beyond racism, beyond prejudice, and beyond ignorance. This was a kind of nationalism so insidious that I had not known to call it nationalism.”

In recent U.S. culture, or part of it anyway, it has become common to investigate one’s own unknown depths of racism, sexism, and other prejudices — a trend that for the most part I consider very positive. But going beyond that to examine nationalism, patriotism, exceptionalism, militarism, and the embarrassing and horrifying assumptions on which these isms rest is generally off limits. Farrar, Straus, and Giroux is to be credited for having been willing to publish Hansen’s book. Millions of liberals intent on breaking down prejudice and stirring up hatred of Russians while justifying a trillion-dollar-a-year military empire should consider reading it.

Chris Hedges: The Rise of Fascism in India

7 thoughts on “David Swanson: How American Exceptionalism Is Exploited to Justify War + How Suzy Hansen Lost Her U.S. Exceptionalism”