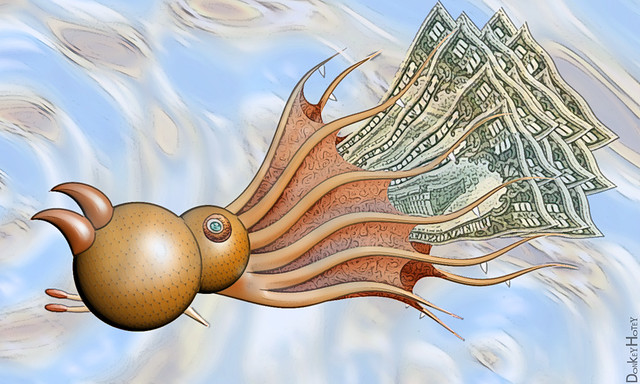 Matt Taibbi concluded that the 2008 Wall Street bailout had “built a banking system that discriminates against community banks, makes Too Big to Fail banks even Too Bigger to Failier, increases risk, discourages sound business lending and punishes savings by making it even easier and more profitable to chase high-yield investments than to compete for small depositors.” In this post-crash environment, the largest financial institutions gained more of a hegemonic grip than ever, with the five biggest banks having come to own almost half the industry by 2015.

With this year’s even larger economic crash, the process of monopolization and financialization has gone several steps further. The re-bailout of Wall Street began last fall, when the Federal Reserve had to respond to the first undeniable indications that another crash was approaching. Since then, the Fed has given out hundreds of billions of dollars in corporate welfare as part of its Covid-19 stimulus package, with the big banks getting the best deals from the bailout. The big banks have also exploited the crisis to gain long-wanted deregulations, with the post-2008 rules on financial risk-taking having recently been lifted.

But the type of monopoly finance capitalism that’s emerged with this latest crash involves more sinister developments than these reinforcements of the power of the biggest banks. The entity that’s benefited the most from the crisis isn’t a traditional bank like Goldman Sachs or JP Morgan, but a corporation called BlackRock—which has been called the world’s largest shadow bank. Since the Fed tapped BlackRock to carry out three government debt-buying programs that relate to the Covid-19 stimulus, the company has made millions off of this job while gaining unparalleled dominance over finance. BlackRock’s pivotal role in the operation was no accident; BlackRock itself authored the plan for a bailout before there even was a crisis.

The initial implication of BlackRock’s facilitation of the Fed’s pandemic response is what Pepe Escobar has called the “Wall Street-ization of the Fed.” The plan behind this, as Escobar explains, is essentially a scheme to consolidate the economy so that BlackRock can increase its profits and its leverage over industry:

“Wall Street has turned the Fed into a hedge fund. The Fed is going to own at least two thirds of all U.S. Treasury bills wallowing in the market before the end of the year. The U.S. Treasury will be buying every security and loan in sight while the Fed will be the banker — financing the whole scheme. So essentially this is a Fed/Treasury merger. A behemoth dispensing loads of helicopter money — with BlackRock as the undisputable winner. BlackRock is widely known as the biggest money manager on the planet. Their tentacles are everywhere. They own 5% of Apple, 5% of Exxon Mobil, 6% of Google, second largest shareholder of AT&T (Turner, HBO, CNN, Warner Brothers) — these are just a few examples. They will buy all these securities and manage those dodgy special Purpose Vehicles (SPVs) on behalf of the Treasury.”

Both financially and politically, BlackRock has become the dominant force of the corporatocracy. BlackRock is bigger than Goldman Sachs, JP Morgan and Deutsche Bank combined, and it’s a major donor to both Republican and Democratic candidates. Now that it’s the operating system of the Fed and the Treasury, it holds a monopoly on the currency system of the United States; since it controls how the money is distributed, it controls who gets the money.

Of course, this doesn’t mean that federal aid will now exclusively go to the big banks and corporations. But it represents a shift towards a dark phase in monopoly capitalism, one where BlackRock and its political and business partners use their newly consolidated economic control to further the process of neoliberal inequality. While the country’s crises bring profits for the ruling circle of business elites in Wall Street and Silicon Valley, the people at large are falling into poverty and being exploited more. The job market has shrunk as tens of millions have permanently become unemployed, and all the household debt that working class people have accumulated since the Great Recession is becoming far less manageable. In addition to the big banks, the only winners are the big companies that can save money on shrunken labor costs, or that can profit from the pandemic in various ways.

BlackRock, with its dominance over the system’s means of financial distribution, represents the structural foundation of the global corporatocracy that’s oppressing people within and outside of the imperial core. In Imperialism, the Highest Stage of Capitalism, Lenin described finance capital as serving the central function of generating profits from imperialist exploitation. So the big financial institutions serve the role of the empire’s engine for transferring wealth upward to the ruling oligarchy, with BlackRock now being the dominant facet of the great financial machine.

“Finance capital, concentrated in a few hands and exercising a virtual monopoly, exacts enormous and ever-increasing profits from the floating of companies, issue of stock, state loans, etc., strengthens the domination of the financial oligarchy and levies tribute upon the whole of society for the benefit of monopolists,” Lenin wrote in Finance Capital and the Financial Oligarchy. “Here is an example, taken from a multitude of others, of the business methods of the American trusts, quoted by Hilferding. In 1887, Havemeyer founded the Sugar Trust by amalgamating fifteen small firms, whose total capital amounted to 6,500,000 dollars. Suitably ‘watered’, as the Americans say, the capital of the trust was declared to be 50 million dollars. This ‘overcapitalisation’ anticipated the monopoly profits, in the same way as the United States Steel Corporation anticipates its monopoly profits in buying up as many iron ore fields as possible.”

The modern versions of those trusts are using similar methods to gain an unprecedented amount of control over the economy, and to accelerate the decline of living standards for everyone but the rich. The only thing the working class has to look forward to is a “gig economy” where housecleaning, delivery service, and what remains of retail are the main employment options, while unemployment remains so high that you’re lucky if you can get a job. This will be exacerbated by the coming austerity measures, which BlackRock’s Trump administration allies aim to carry out. The climate crisis, which BlackRock is hugely contributing to, will be the next phase in the pushing of Americans and others towards Third World conditions; storms, floods, and droughts are expected to drive over 100 million people into poverty by 2030 alone.

BlackRock has emerged as the top player in this brutal late-stage neoliberal order, a “vampire squid” that profits from the intensifying exploitation of the proletariat and the overall decay of society. The fact that it’s now the central part of American capitalism has exposed our system for what it is: a plutocracy that’s slowly imploding in on itself and feeding off of the resulting carnage.

How BlackRock exploited the COVID-19 pandemic

As the country is distracted by the COVID-19 pandemic, another “too big to fail” asset manager which handles more than $7 trillion in direct management and another $20 trillion through its proprietary software, BlackRock, is coming under scrutiny by one investigative author. She’s calling for it to be broken up under antitrust laws. Attorney, author and founder of the Public Banking Institute Ellen Brown joins In Question to discuss.

The Fed and The Big Bank Wealth Heist. Why We Need Public Banking – Ellen Brown

Ellen Brown is an attorney, founder of the Public Banking Institute, and author of thirteen books including Web of Debt and The Public Bank Solution. Her latest book is Banking on the People: Democratizing Money in the Digital Age, published by the Democracy Collaborative. She also co-hosts a radio program on PRN.FM called “It’s Our Money.” Her 300+ blog articles are posted at EllenBrown.com.

Another Bank Bailout Under the Cover of a Virus, by Ellen Brown

Did Congress Just Nationalize The Federal Reserve? No. But… by Ellen Brown