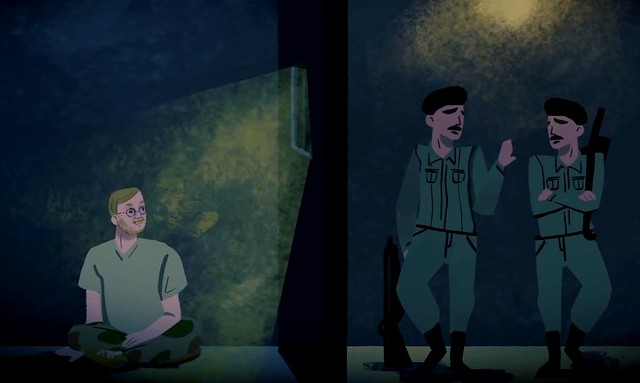 Evil, even in the darkest moments, is impotent before the miracle of human kindness. This miracle defies prejudices and hatreds. It crosses cultures and religions. It lies at the core of faith. Take a brief journey through the eyes of American, Pulitzer Prize-winning journalist Chris Hedges to Jerusalem, Gaza, and Iraq, and discover the sacred bonds that make us human.

I studied Arabic four hours a day, five days a week, with my Palestinian professor, Omar Othman, in Jerusalem. We met in my house on Mt. Scopus overlooking the old city every morning. He would arrive with his books and something from his garden, olives, peaches, apricots or a bag of pistachios he would patiently unshell as we worked and then push towards me. Yom fil mishmish, we would say as we ate his apricots, literally meaning tomorrow will be good times and we will eat apricots, but given the long tragedy that has befallen the Palestinians, this phrase is converted into a wistful tomorrow will never come.

Omar, a polyglot who spoke German, Hebrew, and English fluently and who had worked as a teacher in the court of King Hussein in Jordan, was determined I would not only learn Arabic, but the politesse and formalities of Palestinian society. He drilled into me what to say when someone offered me food – Yislamu Edek – may God bless your hands, or when a women entered the room — nowar el beit – you light up the house – or when someone brought me a small cup of thick, sugary Arabic coffee — away dime. A phrase that meant, may we always drink coffee together in an occasion like this.

Omar had a fondness for the Lebanese child singer Remi Bandali, a fondness I did not share, but on his insistence, I memorized the lyrics to several of her songs. He told long involved shaggy dog jokes in Arabic and made me commit them to memory, although sometimes the humor was lost on me.

In March of 1991 I was in Basra, Iraq during the Shiite uprising as a reporter for The New York Times. I had entered Kuwait with the Marine Corps and then left them behind to cover the fighting in Basra. I was taken prisoner by the Iraqi Republican Guard, who in the chaos – whole army units had defected to join the rebels – had ripped their distinguishing patches off their uniforms so as not to be identified with the regime of Saddam Hussein. I was studiously polite, because of Omar, with my interrogators. I swiftly struck up conversations with my guards. My facility in Arabic rendered me human. And when I ran out of things to say, I told the long, shaggy dog jokes taught to me by Omar. Perhaps it was my accented Arabic, but my guards found these jokes unfailingly amusing.

I spent a week as a prisoner. I slept and ate with Iraqi soldiers, developed friendships with some, including the major who commanded the unit, and there were several moments when, trapped in heavy fighting with the rebels, they shielded and protected me. I would hear them whisper at night about what would happen to me once I was turned over to the secret police or Mukhabarat, something they and I knew was inevitable and dreaded.

That day came. I was flown on a helicopter to Baghdad and handed to the Mukhabarat, whose dead eyes and cold demeanor reminded me of the East German Stasi. There was no bantering now. I was manhandled and pushed forcefully into a room and left there without food or water for 24 hours.

I awoke the next day to plaintive call to prayer, the adhaan, as the first pale light crept over the city.

“God is greater. There is no god but Allah, Muhammad is the messenger of God.”

I went to the window and saw the heavily armed guards in the courtyard below. I did not know if I would live or die.

At dawn the women and often children climb to the flat roofs in Baghdad to bake bread in rounded clay ovens. I was famished. I called out in Arabic to these women. “I am an American journalist. I am a captive. I have not eaten.”

A mother handed fresh bread to her young son who scampered across the roofs to feed me. A few hours later I was turned over to the International Committee for the Red Cross and driven to Jordan and freedom.

Where are they now, these men and women who showed me such compassion, who ignored the role my own country had played in their oppression, to see me as a one of them? How can I replay this solidarity and empathy? How can I live to be like them? I owe Omar, I owe all these people, some of whom I did not know, the miracle of human kindness – and my life.

5 thoughts on “Chris Hedges: How Kindness Saved My Life”