That most charming of couples: Nationalism and hypocrisy

It’s not easy being a flag-waving American nationalist. In addition to having to deal with the usual disillusion, anger, and scorn from around the world incited by Washington’s endless bombings and endless wars, the nationalist is assaulted by whistle blowers like Bradley Manning and Edward Snowden, who have disclosed a steady stream of human-rights and civil-liberties scandals, atrocities, embarrassing lies, and embarrassing truths. END_OF_DOCUMENT_TOKEN_TO_BE_REPLACED

As millions take to the streets demanding political participation, social justice and freedom, opponents to change – governments and reactionary forces worldwide – centralise power, tighten control of civil society and the media and trample on democratic ideals. The dangerous accumulation of powers, “legislative, executive, and judiciary” that the “father of the [American] constitution” James Madison wrote,[i] “in the same hands whether of one, a few, or many, and whether hereditary, self-appointed, or elective, may justly be pronounced the very definition of tyranny.”

END_OF_DOCUMENT_TOKEN_TO_BE_REPLACED 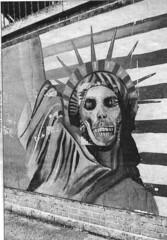 END_OF_DOCUMENT_TOKEN_TO_BE_REPLACED

In the second quarter of 2013, the third-largest U.S. bank by assets, Citigroup, posted a 42% increase in profits which CEO Michael Corbat praised as a “well balanced” result of “cost cutting” programs, including the firing of 11,000 workers.

This big bank has a sordid history of predatory profiteering and criminal activity, not unlike all the other large banks. In the early 20th century, what was then National City Bank was the main bank for the Rockefeller Standard Oil interests. END_OF_DOCUMENT_TOKEN_TO_BE_REPLACED