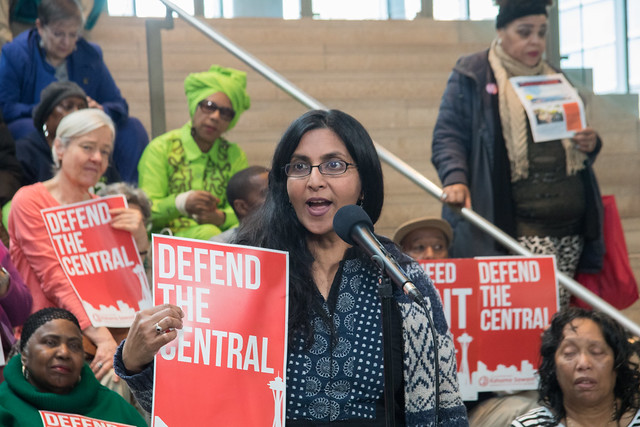 In December Socialist Alternative leader and Seattle City Councilmember Kshama Sawant defeated a well-funded campaign by the city’s business community to remove her in a recall vote.

Since being elected to office in 2013 Sawant and her socialist party have been locked in a bitter battle against the city’s moneyed elites, which has poured hundreds of thousands of dollars into a corporate PAC called “A Better Seattle” and saturated television and digital platforms with negative advertising. She and her party have been denied ads by Google, YouTube, and Hulu. Amazon alone spent over $3 million to defeat her run for office in 2019.

Sawant is hated because she is effective. She helped lead the fight in 2014 that made Seattle the first major American city to mandate a $15 dollar an hour minimum wage. Following a three-year struggle against the richest man in the world – Jeff Bezos – and his political establishment, she and her allies pushed through a tax on big business that increased city revenues by an estimated $210 to 240 million a year.

She was part of the movement that led to Seattle’s successful ban on school-year evictions of schoolchildren, their families and school employees. She was a cosponsor of a bill that protects tenants from being evicted at the end of their “term leases,” requiring landlords to provide tenants with the right to renew their leases and prohibiting landlords from evicting tenants for non-payment of rent if the rent was due during the COVID civil emergency and the renter could not pay due to financial hardship.

Her leadership and her party provide an example of effective resistance to the war being waged on the working class and the poor—but, as she explains in this episode of The Chris Hedges Report, every victory has been won in spite of entrenched opposition from Democrats. Instead of depending on the Democratic Party establishment, Sawant says the only way to make advances in the class war is through class struggle and mobilizing ordinary people.

Chris Hedges and Kshama Sawant: How to Counter Establishment Politics

One thought on “The Chris Hedges Report: How to Defeat the Billionaire Class, with Kshama Sawant”