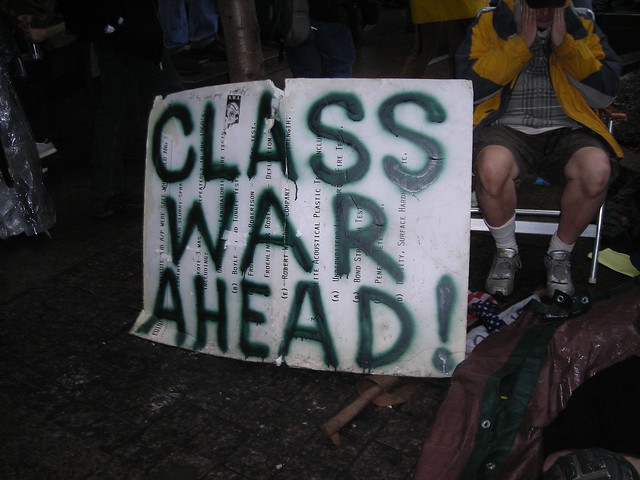 We have been losing ground. Corporate politics has invaded many sectors of our lives. In times of tactical retreat (in preparation for later advances), the military uses a tactic called blowing up the armory to describe a situation in which they will destroy any unsecured weapons and munitions to prevent their opponents from capturing them and using the arsenal against the retreating forces.

Those of us engaged in nonviolent struggle may look around at the innocuous weapons of our pamphlets and banners and dismiss this tactic as not applicable. This, however, is a mistake. The armories of nonviolent struggle are the social institutions that maintain the status quo of civil society. A treasure trove of resources is stored within these facilities: law, education, communication, transportation, wealth, authority, governmental processes, business, commerce, transaction, regulation, media, entertainment, and much more.

We must look starkly at the flailing status of our struggle: these institutions have been invaded by corporate control and extreme greed. We no longer have the option of blowing up these armories – too many innocent civilians are entrenched inside these conquered territories. Nonviolent struggle rejects the notions of “acceptable levels of casualties”. No loss of human life or causing of physical harm can be justified by the worthiness of our cause. We have never had the militaristic luxury of wanton destruction.

But neither can we be passive. The tools of our civilization are being forged into weapons of mass destruction. Our responsibility is clear. We must help citizens to safety. We must remove the arsenal from being used to cause harm to ourselves and others. We must strengthen and build up our own armories of resistance: independent institutions of governance, law, education, communication, information, transportation, and so on.

Furthermore, we must go into the conquered territories of our own society and seek out those who are courageous enough to join us. We must bring the invaluable munitions of skills and knowledge to our aid, encouraging the active participation of scientists, educators, analysts, writers, organizers, and technicians to leave the corporate-political regime and actively struggle for all of humankind.

Although I speak with military terms, I use such language only so that you will understand the ruthlessness of the war that is being waged against us. The corporate-political elite has bent the tools of civilization into the very swords with which they slaughter us. We must melt their swords back into ploughshares. The armories of civil society must be dismantled and reformed to our advantage. It can be done and this is how:

If our municipal corporations (known as city councils and county commissions) are being poised to uphold the domination of the corporate-political state, we should fearlessly use them as a bulwark against the onslaught of injustice even if it leads to the dissolving of the municipal body. In such cases, citizens must then, without hesitation or question, form a system of local self-governance, free from unjust laws or tyrannical destruction of life.

If our police officers are ordered to enforce the immoral, unconstitutional laws, then we must ask them to lay down their badges and stand with us as ordinary citizens. We must relieve them of duty if they comply with commands to use harmful and deadly force against those exercising their Constitutional Rights of Speech, Assembly, and Petition. If an entire police force is determined to maintain the power of corporate interests, then we must renounce their authority as illegitimate.

If our judicial system continues to repeat its long history of pandering to corporate interests to the detriment of the rights and well-being of the people, then we must ask our lawyers and judges to burn their licenses like draft cards, cast off the corrupted weight of precedence, and form arbitration courts such as those created by Gandhi and the Indian lawyers.

If our academic institutions persevere in bending to corporate financial influence, then our young adults must leave the universities and colleges. Similarly, if our public education system continues to allow standardized testing to shape our precious children into obedient soldiers, unthinking consumers, and corporate loyalists, then we must remove our children and ask the teachers to walk out with us.

If our banks maintain the devastating trends of elitist favoritism, political domination, and enforcing the systems of wealth inequality, then we must withdraw our money down to the last penny. We must remove our investments in corporations of tyranny and destruction. We must pressure larger investors to relinquish the privilege of profit that comes at the price of human suffering.

This list is only partial. It must serve as a start to your own strategic thinking on this subject. These actions are not light, nor easy. The ramifications are profound. The Dandelion Insurrection wages struggle within and without the armories of our civilization. We do so nonviolently, but with strength and determination. When our social institutions fall into destructive hands, then we must challenge our courage to the extreme, release the corrupt and conquered halls of power, retreat to higher ground, and wage our struggle from a foundation of strength.

Are You Complicit? by The Anti-Social Socialist

2 thoughts on “Blowing Up The Armory”