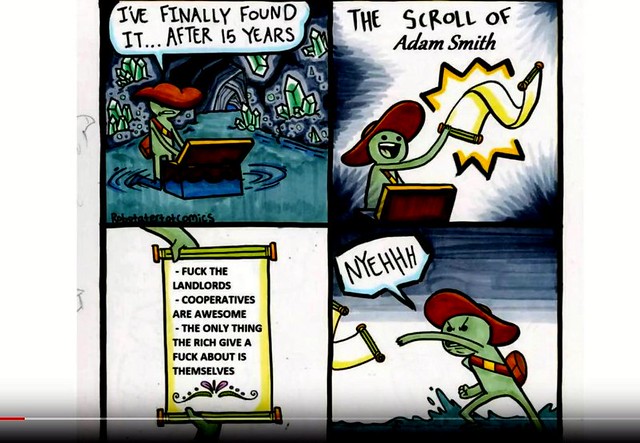 Dave Rubin is fond of calling himself a Classical Liberal, but Adam Smith, whose ideas were a precursor to the ideology, as well as classical liberals like John Locke, John Stuart Mill and Thomas Paine, had very different beliefs than the ones held by Rubin and others who favor free markets.

Smith, known as the Father of Free Market Capitalism was against what he called “The Vile Maxim of the Masters of Mankind” – “All for ourselves and nothing for other people.” He vigorously condemned the gratuitous accumulation of wealth saying:

Smith argued for high and rising wages and state funded education. He was also in favor of government intervention on one condition; that it favored the workers. Smith wrote:

“But in every improved and civilized society this is the state into which the laboring poor, that is, the great body of the people, must necessarily fall, unless the government takes some pains to prevent it.”

Though they were pre-capitalists, Smith and the classical liberals understood that an uneven distribution of wealth and resources would undermine political freedom. They condemned the new property owners with Smith going so far as to label the idle rich as “the unproductive class” who wrangled the wealth out of the hands of those who created it in the form of profits, interest and rent.

“Every tax, however, is to the person who pays it a badge, not of slavery but of liberty.” And “It is not very unreasonable that the rich should contribute to the public expense, not only in proportion to their revenue, but something more than in that proportion.”

John Locke, known as the Father of Classical Liberalism, like Adam Smith, based his idea of property rights on labor, forming the concept of “The Labor Theory of Value” which states property comes about by the exertion of labor upon natural resources. In other words, those who labor on the land, own it; a concept completely antithetical to the capitalist concept of private property in which the capitalists own properties others work.

But the father of Dave Rubin’s ideology went much, much farther formulating what would later become the socialist concept of positive liberty in which individual’s basic needs are met. Locke wrote:

“Charity gives to every man a title to so much out of another’s plenty, as will keep him from extreme want.”

A title is a property right. According to Locke, the right to charity is equal to the right of land ownership or any other property rights; a concept curiously absent from right-wing ideology and today’s property laws.

Thomas Paine, America’s most famous classical liberal, was a tax collector and the first to champion a welfare state in which social insurance would be provided for the poor and those unable to work. Paine also thought social programs should be funded by property tax. He argued that, in the coming decades, Americans would be denied equal access to land and that those who owned it were responsible for paying damages to future generations for that loss.

So if classical liberals believed in taxation, government intervention on behalf of workers, estate tax, property rights of labor, state regulation, free education, worker autonomy, social insurance and a robust welfare state, why do Dave Rubin and others like him call themselves Classical Liberals?

Because Classical Liberals could have never anticipated the 2nd Industrial Revolution. The world they were writing about was one where workers had access to their own means of production and could make a living without renting themselves to an owner who kept the majority of the wealth that worker produced.

The industrial revolution destroyed the craft version of production that Smith, Locke and Paine were writing about. In their day, craftsmen worked side by side with temporary employees learning the trade or, in a worker cooperative. This model was then transformed into the factory system where the owners were separated from the employees and where wealth was scientifically extracted from the workforce and given to the owner.

The Industrial Revolution gave birth to contemporary class distinctions and inverted the classical liberal notion that the idle rich should not eat by focusing that concept downward on the emerging underclass created by the new social order. Conservatives and libertarians perverted this ideology and reversed the targets of Smith, Locke and Paine.

Pre-capitalist, classical liberals were in favor of markets on the condition that all citizens had a right to the same resources and if they didn’t, citizens were compensated for being denied that access. Today we live under the thumb of internal command economies known as the modern corporation; hierarchical, monopolistic institutions that deny citizens those basic rights and do not compensate us for them. Contemporary libertarians who claim the label of classical liberals never address this glaring contradiction.

This willfully neglected fact was best summed up by anarchist Rudolf Rocker who said:

“Democracy with its motto of equality of all citizens before the law, and Liberalism with its right of man over his own person, both were wrecked on the realities of capitalist economy. As long as millions of human beings in every country have to sell their labour to a small minority of owners, and sink into the most wretched misery if they can find no buyers, the so-called equality before the law remains merely a pious fraud, since the laws are made by those who find themselves in possession of the social wealth. But in the same way there can be no talk of a right over one’s own person, for that right ends when one is compelled to submit to the economic dictation of another if one does not want to starve.”

How Do We Rent Our Lives? by The Anti-Social Socialist

Who Was The Real Adam Smith? by The Anti-Social Socialist

What is Private Property? by The Anti-Social Socialist