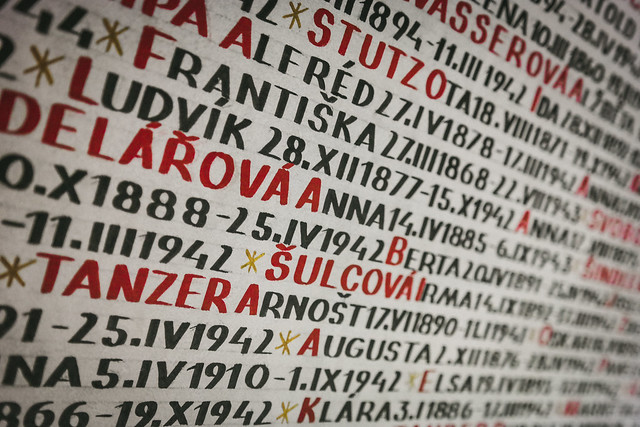 One of the most powerful moments on any trip I have taken in my life was at the Pinkas Synagogue in Prague. It was built at least 500 years ago, and now holds a museum.

In one part is a collection of children’s drawings from the Theresienstadt Ghetto during the Shoah (Holocaust). Artist and teacher Friedl Dicker-Brandeis encouraged the children of the ghetto to make drawings about their experiences. In silence, I pored over dozens of depictions. Visions of tender humanity living in a nightmare.

On the walls of the synagogue were listed the names of the dead. Children, women, men. Thousands of names. 77,297 names. Each one of them painstakingly written by hand. There was something visceral about seeing those names. Too many to read. But I read as many as I could. And each one seemed to animate itself in my mind. A human soul behind each one peering out at me through the veil between life and death.

Between 1933 and 1945, six million Jews and millions of others, Slavs, Roma, communists, homosexuals, the disabled, were murdered by a regime of supremacist evil. A fascist regime in every definition. And the killings were only part of it. The misery this reign of terror meted out on millions more was unimaginable.

January 27th is Holocaust Remembrance Day. A day to remember and honour those killed through systematic butchery in that brutal and sadistic era. And a day where those of us who stand as witnesses declare “never again.”

In fact, an entire international legal framework has been meticulously constructed to push back against any modest gain from the Geneva Convention. Every act of barbarism condemned in those years of infamy has been sanitized by a new set of mercenaries, occupiers, settlers, soldiers and genocidaires.

If the names of every civilian killed since World War II through state violence were etched into a wall by hand today it would take a century to complete and would likely be long enough to extend to the moon. Add to it the names of soldiers fooled or conscripted to fight in one of the countless and senseless wars fought by empires, and that list would extend far beyond that. And I don’t want to even think about the unnamed species treated as disposable by far too many of our kind.

I have been pausing a lot today to reflect on that wall in Prague. To think about these names beyond the beautiful calligraphy etched into stone. To contemplate my own place in history and how we are all born into an age where our voice is small unless connected in a chorus. To ponder how methodically cruel we can be toward one another when guided by lies, fear and social hatred. And to consider the soaring heights we can reach when that animus is replaced with solidarity and empathic courage.

“Never again” is not a declaration, so much as it is a warning. A scream against the madness. It must be that, or it is nothing but an empty sigh of complacency against an ever encroaching and ravenous night.

WWII Was Not Fought To Save Anyone From Death Camps, by David Swanson

4 thoughts on “A Scream Against the Madness, by Kenn Orphan”