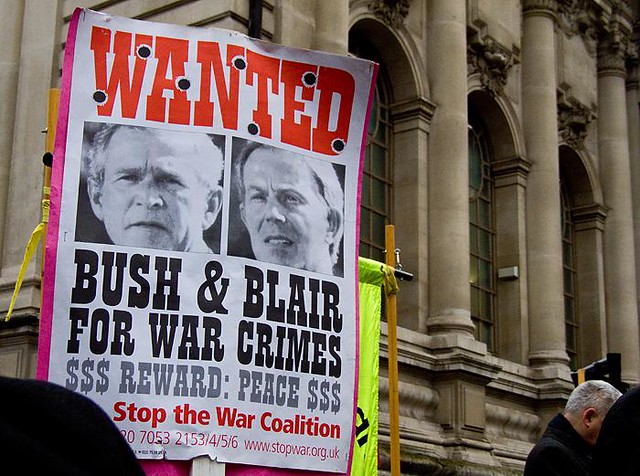 As the world watches the horror of Putin’s war on Ukraine unfold, there is another that must be remembered. Nineteen years ago, on the 20th of March, 2003, George W. Bush launched his infamous war on the people of Iraq. It was a war based on lies. Yet Bush was never sanctioned. Never had to face charges. Never saw the inside of a courtroom, let alone a jail cell.

On the contrary, Bush’s image was rehabilitated from war criminal to statesman by a sycophantic media that adores the myths of American exceptionalism far more than they honour the truth. A grandfather who paints portraits, goes to football games with Ellen DeGeneres, and gets hugs from Michelle Obama. How quickly the focus shifted from the mountains of corpses and rivers of blood he was responsible for.

His partner in crime across the pond, Tony Blair, would receive a similar makeover. His crimes were rewarded with knighthood. In fact, the only ones punished in this tale of corruption and brutality have been those who revealed it all to the public. Chelsea Manning and Julian Assange. And now Assange sits in a gulag awaiting a terrible fate of extradition to the US.

Hundreds of thousands of civilians have been killed in the wars led, supported or funded by the US and its allies, from Afghanistan to Iraq to Yemen. But their ghosts fade into the fog of Western memory with each passing year. Those souls tortured in Abu Ghraib have been rendered invisible by a culture obsessed with rebranding history.

The hypocrisy of the West has been painfully obvious these past few weeks. As in Yemen, the people of Afghanistan have all but been forgotten as they starve thanks to a freeze on their assets by the US. Their plight and its cause are seldom discussed in mainstream media. If it was, then the selective outrage over Ukraine would be revealed. How could they explain their deliberate starvation of children, women and men in some of the poorest places on earth while they lambast Putin?

Without a doubt, Putin’s war on Ukraine is abhorrent. It and his imperialistic ambitions should be condemned. But no more so than the imperialism and scores of military actions taken against the Global South by the US and its allies. This isn’t “whataboutism,” it is fact. And it is only thanks to racism that this ridiculous charge is brought up over and over against anyone who dares jog the short memory of the Western elite.

On this grim anniversary, it is worth a reminder that most people in war zones, whether it be in the Middle East, Africa or Europe, don’t care very much about which flag is emblazoned on the bombs falling on their houses. They just want the bombs to stop falling.

Will Tony Blair Finally Stand Trial for His Part in the “Supreme International Crime”? by Felicity Arbuthnot

2 thoughts on “They Just Want the Bombs to Stop Falling, by Kenn Orphan”