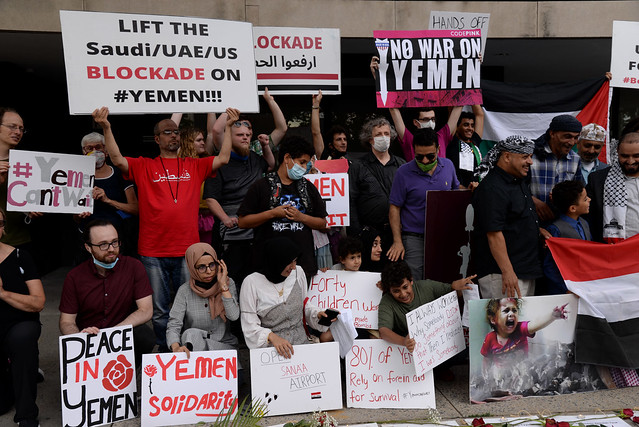 For decades, the U.S. public seemed largely indifferent to most of the horrible suffering of war. The corporate media outlets mostly avoided it, made war look like a video game, occasionally mentioned suffering U.S. troops, and once in a blue moon touched on the deaths of a handful of local civilians as if their killing were some sort of aberration. The U.S. public funded and either cheered for or tolerated years and years of bloody wars, and came out managing to believe falsely that a large percentage of war deaths are of troops, that a large percentage of war deaths in U.S. wars are U.S. troops, that wars happen in a mysterious place called a “battlefield,” and that with rare exceptions the people killed by U.S. troops are people who need killing exactly like those given death sentences in U.S. courts (except for the ones later exonerated).

For decades, wise and strategic peace advocates counseled against bothering to mention the millions of men, women, and children slaughtered, wounded, made homeless, terrified, traumatized, poisoned, or starved by U.S. wars. Nobody would care about them, we were told, so mentioning them wouldn’t actually help them. It would be smarter to mention only U.S. troops, even if it perpetuated the false belief that the wars were not one-sided genocidal slaughters. It would be even smarter, we were told, to focus on the financial costs of the wars, even though the U.S. government simply invents how ever much money it wants for more wars. Money, we were told, is something that people can care about.

Of course, the obvious problem wasn’t what we talked about, but that we weren’t allowed on television. Of course, the average U.S. resident is not a heartless sociopath. Of course, people care all the time about distant and different human beings. When hurricane victims are presented in the media as worthy, people donate. When a famine is blamed on nature, the money gushes forth. When cancer is depicted as arising from a pristine, unsullied environment, I just dare you to find a neighborhood that won’t run a marathon to cure it. So, in theory, I always believed that people in the United States could in fact care about war victims. Just as they could declare “We Are All French” when a bomb went off in France, they could in theory declare “We Are All Yemeni” when the U.S. and Saudi militaries terrorize Yemeni children, or announce “We Are All Afghans” when Joe Biden steals billions of dollars needed for basic survival.

You’ll have spotted the actual problem, of course. There’s no such thing as being terrorized by the U.S. military or a U.S. president stealing from foreigners. Just about nobody, in fact, even knows what colors the Yemeni flag is — much less have they pasted them up everywhere. In the U.S. media those things do not exist. But caring about war victims does exist. I distinctly remember how much people cared about fictional infants removed from incubators to get the first gulf war going, or the impact had by videos of individual victims of ISIS. “Rwanda” was a nonsensical argument for a war on Libya precisely because people are understood to care about war victims when needed to. Syrians have been worthy war victims when the wrong side has been falsely accused of using the wrong kind of weapon. Caring about war victims was always a possibility, and now it has burst forth onto central stage. We now see, directed toward Ukrainians, the concern and empathy that were always possible for little children and grandmothers murdered by war in Iraq or dozens of other countries.

For those of us whose opposition to war was always principally driven by concern for its direct victims — augmented by concern for the victims of diverting so many resources into war instead of into useful things — this is an opportunity to speak honestly. Speaking honestly is always more persuasive than speaking manipulatively. Unless you’ve decided to cheer for Russian mass-murder, here is a chance to say to the media-consuming public: YES! YES! We are with you! War is horrendous! War is immoral! There is nothing worse than war! We must abolish this barbarism! We must abolish it no matter who does it or why. And we’ll only do that if we learn the power of nonviolent action to resist it.

Millions of Russians and non-Russians believe that Russia is acting defensively and that whatever it does is justified. Millions of Ukrainians and non-Ukrainians believe that whatever it does is defensive and justified. The arguments are wildly different, and we need not dignify the idiocy of objecting to equating them. There is nothing equal or even measurable about human actions. But Russia had nonviolent alternatives to resist NATO expansion and chose violence. Ukraine had nonviolent alternatives to resist Russian invasion, and U.S. televisions are not telling us to what extent Ukrainians have in fact chosen, with little support or organization, to attempt them.

If we all survive this crisis, the one lesson we need to take away from it is that human beings live under those fantastic streaks of light that television talking heads ooh and aah over. And if those human beings don’t seem to matter much, we can just try thinking of them as if they were Ukrainians. Then we can work on comprehending that the enemy is not the people in whose names the bombs fall. The enemy is war.

U.S.-Poland Dogfight over Ploy for Sending NATO Warplanes to Ukraine, by Finian Cunningham

12 thoughts on “OMG, War Is Kind of Horrible, by David Swanson”