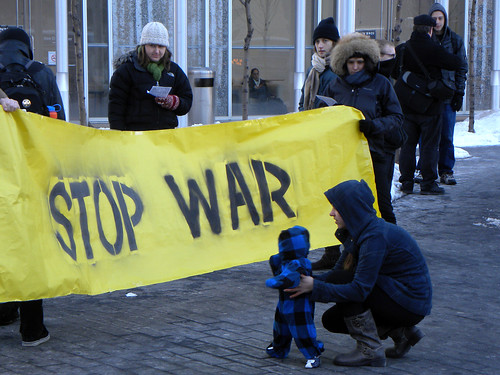 END_OF_DOCUMENT_TOKEN_TO_BE_REPLACED

democracynow – A federal judge has upheld the National Security Agency’s bulk collection of U.S. telephone data just days after a separate court reached an opposite opinion. On Friday, District Judge William Pauley dismissed a lawsuit from the American Civil Liberties Union challenging the NSA’s mass collection of U.S. phone records. Pauley said telephone metadata could have potentially prevented the 9/11 attacks by alerting the government to hijackers who made phone calls from the United States. The issue will likely head to the Supreme Court — Pauley’s ruling comes less than two weeks after another federal judge questioned the program’s constitutionality and described the bulk collection as “almost Orwellian.” We’re joined by two guests: Jameel Jaffer, ACLU deputy legal director and director of its Center for Democracy; and Glenn Greenwald, the journalist who first broke the story about Edward Snowden’s NSA leaks.

END_OF_DOCUMENT_TOKEN_TO_BE_REPLACED

Mongi Dhaouadi of CAIR CT introduces Sandy Staub of the CT Chapter of the American Civil Liberties Union. She speaks at the “NSA Don’t Spy on US Forum” June 30, 2013, Berlin, CT for more http://www.acluct.org. END_OF_DOCUMENT_TOKEN_TO_BE_REPLACED

What the disclosures of former CIA contractor Edward Snowden show perhaps above all else is just how petrified the leaders of the United States have become – of ordinary citizens both in the US and around the world. When we say “leaders” we mean the ruling elite – the top one percent of the financial-corporate-military-industrial complex and its bought- and paid-for politicians.

The international manhunt by the US authorities for Snowden, which has accelerated with his flight to Moscow to evade extradition from Hong Kong, is indicative of the desperation in Washington’s elitist establishment to quash him and what he is revealing about their despotic rule.

END_OF_DOCUMENT_TOKEN_TO_BE_REPLACED

Congressman Dennis Kucinich (D-OH), who has led opposition to the PATRIOT Act since its inception, today released the following statement after the Justice Department confirmed it maintains classified legal interpretations of the Act.

“In response to a Freedom of Information Act lawsuit filed by the American Civil Liberties Union, the Department of Justice recently confirmed that it maintains secret interpretations of Section 215 of the PATRIOT Act. END_OF_DOCUMENT_TOKEN_TO_BE_REPLACED

Rick Rozoff, the manager of Stop NATO, censures Attorney General Eric Holder’s speech in which he insisted that the U.S. president has a right to order the assassination of U.S. citizens overseas, and called it “a frightening development.”

END_OF_DOCUMENT_TOKEN_TO_BE_REPLACED

NEW YORK – The government today asked the Supreme Court to overturn an appeals court ruling that allowed the American Civil Liberties Union to challenge the constitutionality of a law that gives the government unprecedented authority to monitor international emails and phone calls by Americans.

END_OF_DOCUMENT_TOKEN_TO_BE_REPLACED

On Tuesday, in an extremely troubling ruling in the District Court in Washington D.C., Judge John D. Bates dismissed a lawsuit contesting what is described as President Obama’s “targeted killing” policy, but which is, in fact, a program to assassinate US citizens anywhere in the world, without explanation, and without the involvement of Congress or the judiciary.

The case concerns Anwar al-Awlaqi (aka al-Awlaki or al-Aulaqi), an American citizen living in Yemen, who “was placed on kill lists maintained by the CIA and the US military’s Joint Special Operations Command (JSOC) earlier this year,” as the Center for Constitutional Rights has explained. Al-Awlaki was also labeled as a “specially designated global terrorist” on July 16, even though, behind the rhetoric, doubts have been expressed about his significance, which make it obvious that there are profound problems in allowing the executive branch to have the unfettered power to decide when American citizens should be designated for assassination.

END_OF_DOCUMENT_TOKEN_TO_BE_REPLACED

WASHINGTON – In testimony before a House Appropriations Subcommittee today, Attorney General Eric Holder defended the merits of his November decision to try the 9/11 defendants in federal criminal court, but nevertheless stated that the administration may still consider using the untested military commissions, instead. Holder said a final decision regarding the 9/11 suspects was “weeks away.”

Since 9/11, the military commissions have resulted in three terrorism-related convictions. Federal courts, on the other hand, have produced over 300.

END_OF_DOCUMENT_TOKEN_TO_BE_REPLACED

Congressman Dennis Kucinich (D-OH) yesterday wrote to Attorney General Eric Holder following news reports that Americans have been included on targeted assassination lists maintained by the Central Intelligence Agency (CIA) and the Joint Special Operations Command (JSOC). The reports indicate that the President has authorized military operations with the express understanding that Americans might be killed under this policy.  In the letter, Kucinich requests the legal basis for revoking the constitutional rights of any American citizens. END_OF_DOCUMENT_TOKEN_TO_BE_REPLACED

WASHINGTON – Criticizing the Obama administration’s decision to charge accused Christmas Day attacker Umar Farouk Abdulmutallab in the criminal court system, members of Congress are calling for legislation requiring intelligence officials to be consulted about how to handle terrorism suspects after their capture, arguing that options other than the criminal justice system should be considered. The Washington Post, in an editorial on January 23, supported this approach.

The following can be attributed to Anthony D. Romero, Executive Director of the American Civil Liberties Union:

END_OF_DOCUMENT_TOKEN_TO_BE_REPLACED

NEW YORK – In a Freedom of Information Act (FOIA) request filed today, the American Civil Liberties Union asked the government to disclose the legal basis for its use of predator drones to conduct “targeted killings” overseas. In particular, the ACLU seeks to find out when, where and against whom drone strikes can be authorized, and how the United States ensures compliance with international laws relating to extrajudicial killings.