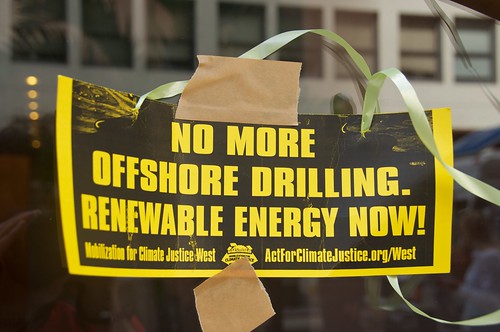 END_OF_DOCUMENT_TOKEN_TO_BE_REPLACED

By Erika Bolstad
McClatchy Newspapers
May 29, 2010

BP has abandoned its most recent “top kill” effort to contain its runaway oil well in the Gulf of Mexico, a company official announced Saturday evening.

“After three full days, we have been unable to overcome the flow,” said the company’s chief operating officer, Doug Suttles at a news conference in Robert, La. “. . . This scares everybody, the fact that we can’t make this well stop flowing, or the fact that we haven’t succeeded so far.”

END_OF_DOCUMENT_TOKEN_TO_BE_REPLACED

Thirty days into the BP oil spill one mile down into the Gulf of Mexico it should be clear to every objective person that President Obama has failed miserably.  This oil spill is more than a disaster or crisis; it is a catastrophe of unprecedented proportions.  This environmental catastrophe will quickly morph into a national economic catastrophe as economic doomsday facing the fishing and tourism industries generates countless negative economic ripples throughout the US economy.  Unemployment and economic growth will suffer.

END_OF_DOCUMENT_TOKEN_TO_BE_REPLACED

May 20, 2010 — One month after the fatal explosion of the Deepwater Horizon rig, McClatchy journalists provide us with an update on the situation.

END_OF_DOCUMENT_TOKEN_TO_BE_REPLACED

by Congressman Dennis Kucinich
Washington, May 19, 2010

Congressman Dennis Kucinich D-OH today made the following statement on the Floor of the House of Representatives about the ongoing ecological disaster in the Gulf of Mexico:

“The Creator gave us a paradise, and we, appropriating the power of nature’s god, are turning our planet into a smoking, glowing, oily mess by plundering Mother Earth of her treasures and by refusing to recognize the growing evidence that our reliance on oil, coal and nuclear threatens our health, our security, our economy, our nation and the world. END_OF_DOCUMENT_TOKEN_TO_BE_REPLACED

By Renee Schoof
McClatchy
May 19, 2010
WASHINGTON

The latest video footage of the leaking Deepwater Horizon oil spill in the Gulf of Mexico show that oil is escaping at the rate of 95,000 barrels — 4 million gallons — a day, nearly 20 times greater than the 5,000 barrel a day estimate BP and government scientists have been citing for nearly three weeks, an engineering professor told a congressional hearing Wednesday.

END_OF_DOCUMENT_TOKEN_TO_BE_REPLACED

Whoops! The ‘press release’ was a hoax (I thought it was too good to be true, shades of the Yes Men as it is in fact a production of the Yes Lab). However, it doesn’t alter any of my comments. Here is the mail I just received on the hoax: END_OF_DOCUMENT_TOKEN_TO_BE_REPLACED

Scott Pelley speaks to one of the survivors of the deadly Deepwater Horizon oil rig blast who was in a position to know what caused the disaster.

Scott Pelley investigates the Deepwater Horizon oil rig explosion that killed 11, causing the ongoing oil leak in the waters off of Louisiana. One survivor talks about his harrowing escape and what happened after he got off the burning rig. END_OF_DOCUMENT_TOKEN_TO_BE_REPLACED

Cultures that do not recognize that human life and the natural world have a sacred dimension, an intrinsic value beyond monetary value, cannibalize themselves until they die. They ruthlessly exploit the natural world and the members of their society in the name of progress until exhaustion or collapse, blind to the fury of their own self-destruction. The oil pouring into the Gulf of Mexico, estimated to be perhaps as much as 100,000 barrels a day, is part of our foolish death march. It is one more blow delivered by the corporate state, the trade of life for gold. But this time collapse, when it comes, will not be confined to the geography of a decayed civilization. It will be global.

END_OF_DOCUMENT_TOKEN_TO_BE_REPLACED

I’ve seen this movie before. In 1989, I was a fraud investigator hired to dig into the cause of the Exxon Valdez disaster. Despite Exxon’s name on that boat, I found the party most to blame for the destruction was … British Petroleum. That’s important to know, because the way BP caused devastation in Alaska is exactly the way BP is now sliming the entire Gulf Coast.

Tankers run aground, wells blow out, pipes burst. It shouldn’t happen but it does. And when it does, the name of the game is containment. Both in Alaska, when the Exxon Valdez grounded, and in the Gulf over a week ago, when the Deepwater Horizon platform blew, it was British Petroleum that was charged with carrying out the Oil Spill Response Plans (“OSRP”) which the company itself drafted and filed with the government.

END_OF_DOCUMENT_TOKEN_TO_BE_REPLACED

Sent to DS from James at ChrisBunny.

Get On the Road! Get to Work! « ChrisBunny!

by James Chris Fields
ChrisBunny! Facebook!
crossposted at ChrisBunny!
May 5, 2010

Please donate your old pantyhose to the Gulf Coast oil disaster cleanup, right now; shave your head and donate the hair! Our goal is to carry a 3 room apartment U-haul from NYC to Gulf Shores 7 days from now.

In order to keep what we have up here, we need to protect what is at stake on the Gulf Coast. It’s very simple, email me at jameschrisfields@yahoo.com, tell me you will donate washed hair clippings from your head, from your favorite salon, and washed pantyhose from your ass and the asses of your friends. We will come pick it up. Simple as that!

END_OF_DOCUMENT_TOKEN_TO_BE_REPLACED

The scope of the tragedy of the undersea oil gusher in the Gulf of Mexico is shocking. Please don’t call it a “spill” the gash in our Mother Earth is literally hemorrhaging oily death-blood.

British Petroleum, the company who owns the offshore well, gave “liberally” to candidates in the 2008 election cycle, with the largest donor receiving $71,000 for his campaign—Barack Obama.

We should scream bloody-murder about BP and boycott them straight to bankruptcy. Additionally, the company that everyone on the “left” loves to hate: Halliburton probably shares a majority of the blame for this catastrophe of biblical proportions, too.

END_OF_DOCUMENT_TOKEN_TO_BE_REPLACED

Palast on BP “The master of disaster”.