It was the deadliest workplace accident in New York City’s history. A dropped match on the 8th floor of the Triangle Shirtwaist Factory sparked a fire that killed over a hundred innocent people trapped inside. The private industry of the American factory would never be the same.

END_OF_DOCUMENT_TOKEN_TO_BE_REPLACED The Enduring Mystique of the Marshall Plan

Amidst all the stirring political upheavals in North Africa and the Middle East the name “Marshall Plan” keeps being repeated by political figures and media around the world as the key to rebuilding the economies of those societies to complement the political advances, which hopefully will be somewhat progressive. But caveat emptor. Let the buyer beware.

END_OF_DOCUMENT_TOKEN_TO_BE_REPLACED

The reports of Libya mobilizing its air force against its own people spread quickly around the world. However, Russia’s military chiefs say they have been monitoring from space — and the pictures tell a different story. According to Al Jazeera and BBC, on February 22 Libyan government inflicted airstrikes on Benghazi — the country’s largest city — and on the capital Tripoli. However, the Russian military, monitoring the unrest via satellite from the very beginning, says nothing of the sort was going on on the ground. At this point, the Russian military is saying that, as far as they are concerned, the attacks some media were reporting have never occurred. The same sources in Russia’s military establishment say they are also monitoring the situation around Libya’s oil pumping facilities.

END_OF_DOCUMENT_TOKEN_TO_BE_REPLACED

Interview with Rick Rozoff, US journalist covering NATO enlargement and analyst with a Canadian independent Center for Research on Globalization.

My point was that the US European Command launched Africa, it was very much in conjunction with NATO, including the fact that the European Command and the NATO are run by the same person, so there is an organic connection between these two organizations. NATO became involved openly in Africa in 2006. The African stand-by force, nominally under the control of the African Union, is really modeled after the NATO response force.  We had NATO first operation in Africa in 2005, when NATO airlifted over 30 000 African Union peace keepers in the west of Sudan. NATO is actively involved in airlifting and sea lifting both troops and suppliers in Somalia. END_OF_DOCUMENT_TOKEN_TO_BE_REPLACED

This is the question we addressed to Rick Rozoff, US journalist covering NATO enlargement and analyst  with a Canadian independent Center for Research on Globalization.

They talk currently about military intervention in Libya which can take a number of forms. I think it is important to recall that the Chief Military Commander of European Command is also the supreme Commander of NATO. So currently for example US Admiral James Stavridis occupies both posts. END_OF_DOCUMENT_TOKEN_TO_BE_REPLACED

With images of dictatorial crackdown filling the internet media machine, it’s an opportune time for the American citizenry to re-examine our own nation’s vast security apparatus. While reflecting on our country’s many dark connections to Mubarak and numerous other dictators, let us also reflect on how our nation internally copes with legal democratic challenges other than voting.

END_OF_DOCUMENT_TOKEN_TO_BE_REPLACED

As citizens of Western countries are inspired by the revolutions in the Middle East — and in particular, I think, by witnessing the unquechable determination of so many people to throw off the shackles of tyranny, no matter the cost — the first battleground to open up in the United States is Madison, Wisconsin, where governor Scott Walker, described in the Guardian by US author and screenwriter Clancy Segal (the child of union organizers) as “a dim bulb but ultra-reactionary and with obvious political ambitions,” is heading “a sustained, coordinated campaign by recently elected and highly pugnacious Republican governors to cripple what’s left of the American labor movement” by stripping public sector unions of most of their collective bargaining rights, as well as imposing steep reductions on workers’ pension and health care benefits.

END_OF_DOCUMENT_TOKEN_TO_BE_REPLACED 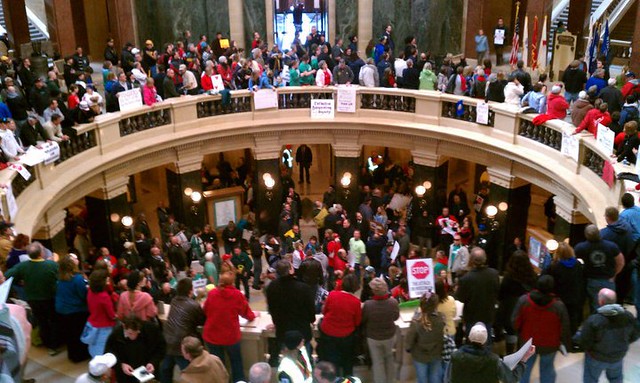 Quick Summary: The global bankers, who caused our economic crisis, are attempting to deflect blame and divide the American public by escalating attacks on public-sector workers. The battle in Wisconsin, which is spreading across the entire nation, should be viewed in a global economic context. Do not let the obsolete Republican vs. Democrat charade confuse you. Even if you believe Unions have been corrupted, in this case you have to go with the strategy: “The enemy of my enemy is my friend.”

END_OF_DOCUMENT_TOKEN_TO_BE_REPLACED

storyofcitizensunited.org —- Season Two launches on March 1st with The Story of Citizens United v. FEC and an exploration of the inordinate power that corporations exercise in our democracy.

END_OF_DOCUMENT_TOKEN_TO_BE_REPLACED

During a wide-ranging interview prior to taking the stage at the Tea Party Patriots American Policy Summit in Phoenix this week, likely presidential candidate Ron Paul stated he “encouraged a write-in vote” as a protest against the existing corrupt “single party system” consisting of Democrats and Republicans. Responding to questions from Voters Evolt, Texas Congressman Paul said he would not “discourage” any votes cast for him. However, fearing it would “glorify the majority,” Paul did not favor a National Policy Referendum.