A wide-ranging interview with Pulitzer Prize winning journalist, and outspoken public intellectual Chris Hedges on his latest book ‘Days of Destruction, Days of Revolt’ and his life spent fighting for political and social justice. Recorded for The Public on CIUT 89.5FM in Toronto, August 2012.

END_OF_DOCUMENT_TOKEN_TO_BE_REPLACED

The full text of the United Nations Resolution on Syria has been published and thanks to the efforts of the Russian Federation and China is one of the most balanced of such documents in the last century. However there remains the threat of a western attack on Syria. END_OF_DOCUMENT_TOKEN_TO_BE_REPLACED

US President Barack Obama described the latest Security Council resolution on Syrian chemical weapons as “a huge victory for the world”. It certainly was a huge victory for diplomacy over war, to the relief of the world’s people.

But for Obama to seek credit in the passing of this resolution is contemptible. It was a defeat for warmongers led by the likes of Obama and his Secretary of State John Kerry, who were clamoring for unilateral missile strikes on Syria.

END_OF_DOCUMENT_TOKEN_TO_BE_REPLACED 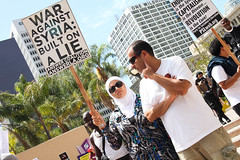 U.S. Secretary of State John Kerry announced that on August 21 the Assad government slaughtered 1,429 people, including 426 children, in a sarin chemical attack in Ghouta, a Damascus suburb. (Doctors Without Borders put the total at about 300.) Secretary Kerry insisted that now the United States had no choice but to launch U.S. bombing attacks against President Bashar al-Assad, devolving into another of America’s “humanitarian wars.”