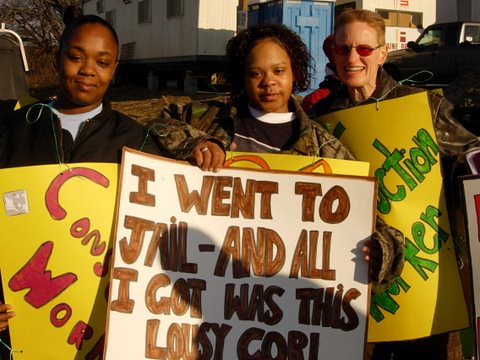 For many poor women, welfare and family assistance was their primary means of escaping abusive mates. Such programs provided support for them and their children. Cutbacks in welfare have now caused a dramatic drop in the number who dare attempt to flee hurtful relationships. Low paying jobs, chronic unemployment, and poverty in general have left many impoverished women with few survival resources.

In desperate attempts at finding means of support and escaping their batterers, some women turn to drug dealing—which, in turn, helps explain the sharp increase in the female prison population. In recent years, the number of women in prison has climbed to over 200,000 with African-American women being hardest hit by the lock-’em-up craze.

What kind of women end up in prison? Mostly young single mothers with few job skills, many having left home early because of sexual or physical abuse, many with a drug or alcohol addiction to ease the pain of their lives. Almost all have been living in or near poverty. Most of them are convicted of prostitution, shoplifting, petty drug dealing, or passing bad checks to feed themselves and their children.

It should come as no surprise that none of them are big-time narcotics traffickers, gangsters, crooked contractors, or financial embezzlers. The latter seldom see the inside of a penitentiary.

Few imprisoned women have committed an act of violence, though many have been victims of violence in their lives. Many are charged as accessories to crimes committed by boyfriends or ex-boyfriends who implicate them in order to get lighter sentences for themselves. Some women have been given life in prison without parole for conspiracy to distribute drugs, even though they played only tangential roles to the men involved.

Heavy sentences are also inflicted upon those who resort to self-defense. Often a woman’s choice is twenty years in prison for injuring or killing her domestic abuser or getting beaten to death herself. This war against women is part of the “war against crime.” We are supposed to feel more secure thanks to all these heartless measures.

7 thoughts on “The Lost Women by Michael Parenti”